WASHINGTON -- In the aftermath of Democrat Kathy Hochul's surprise victory over Republican Jane Corwin in a special House election in western New York, political insiders and pundits are debating what mattered more: The debate over Medicare or the presence of a third candidate -- Democrat turned "Tea Party" candidate Jack Davis.

Both arguments have some merit, but the survey data and turnout statistics show a significant shift in the political environment. Democrats now have a potent Medicare message, and that change should give Republicans pause as they look to 2012.

Whatever the explanation, Hochul's victory was extraordinary and unexpected. Unofficial returns give her just over 47 percent of the vote to 43 percent for Corwin and 9 percent for Davis. Hochul's share of the vote exceeds what most other Democratic candidates have received in New York's 26th District over the last 10 years including the 46 percent Barack Obama received in losing the District to John McCain in 2008.

Hochul's margin was also strengthened by a significant boost in turnout from the traditional Democratic strongholds of Erie and Niagara counties. Those counties contributed 55.4 percent of the vote on Tuesday, compared with between 50 and 51 percent in the last three Congressional elections. 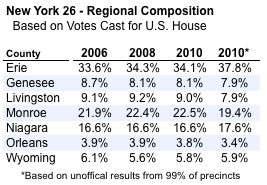 Democrats quickly attributed the outcome to Jane Corwin's endorsement of the Republican budget plan that would end the current Medicare program and replace it with a system that would help the elderly to purchase private health insurance.

Republicans have countered with the argument that the candidacy of Jack Davis, not the Medicare issue, explains Hochul's victory. While the Davis candidacy was certainly a big contributing factor to the outcome, it would wrong to assume that all of his voters would have supported Corwin, the Republican candidate, had he not been in the race.

Unfortunately there are no exit polls, and neither of the two pre-election polls asked Davis voters who they might have supported had he not been a candidate.

The two pre-election surveys did report tabulations of the Davis vote by party that suggest that, while he likely took more votes from Corwin than Hochul, the split was closer than many assume. On the Siena College Research Institute survey, Davis did slightly better among Republicans (13 percent) than Democrats (10 percent). The gap was bigger on the PPP automated survey (16 percent for Davis among Republicans, versus 8 percent among Democrats). As Nate Silver reports, an extrapolation of those numbers tells us that Davis had roughly two Republican supporters for every Democrat on the two pre-election surveys.

You can see that pattern in the county-by-county results. As the following plot shows, support for Davis was generally higher in the more Republican counties (where Corwin won a bigger share of the vote), although there were exceptions. For example, Davis did especially well in Niagara County, traditionally the second most Democratic county in the District. 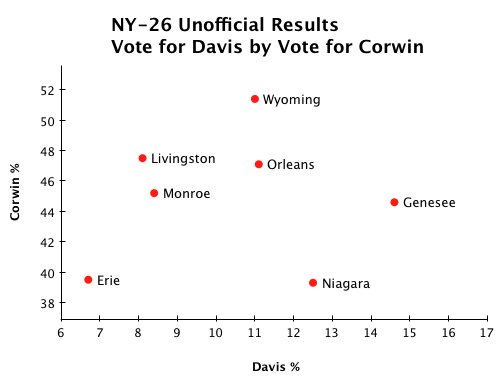 The bigger impact of the Davis candidacy may have been more tactical and intangible. Davis spent $1.7 million through early May, according to his FEC filings. That prompted the Republicans to spend heavily to attack him and drew Corwin into an extended crossfire, which raised the negative ratings of both candidates.

What about the evidence that the Medicare issue mattered? Without an exit poll, the only real survey evidence on that comes from a single question on the final Siena College poll. When presented with a list of six issues and asked to pick the one that was most important "in deciding which candidate to support," the likely voters sampled by Siena selected Medicare most often (21 percent) followed closely by jobs (20 percent) and the federal budget deficit (19 percent). Siena reported that Hochul was winning 74 percent of the voters who chose Medicare as the most important issue, a statistic widely cited by Democrats. 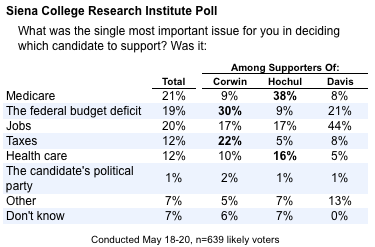 But some question the significance of that ranking of Medicare, given that the difference between the top three issues falls well within the survey's margin of sampling error.

Nate Silver warned appropriately that "correlation may not equal causation" in these results: Many voters may have chosen answers that reflect what they have heard the candidates discuss, not the factors that were most influential in determining who they decided to back.

But that may well be the point. The Siena poll results convey the degree to which the debate over Medicare and the
Republican budget proposal dominated the candidate's messages. And notice the way mentions of Medicare (for Hochul voters) and budget issues (for Corwin) compared to the smaller number of either set of supporters mentioning "jobs" (17 percent). That result is remarkable given the way national surveys have routinely found at least two-thirds of Americans naming economic issues as the most important issue facing the country since 2009.

If we really want to determine whether the Medicare debate "caused" Hochul's victory we would need to conduct an experiment in a parallel universe where Corwin did not endorse the Republican budget proposal or where the Democrats opted to emphasize other issues. Obviously, no such option exists, so we are left to examine what happened before and after Corwin embraced the budget and Medicare proposals of Rep. Paul Ryan (R-Wis.).

Before the Hochul campaign started attacking Corwin on the Medicare issue, the first Siena poll put the Republican ahead by a narrow margin, 36 percent to 31 percent. Ten days later, an automated survey conducted by Democratic firm Public Policy Polling and sponsored by Daily Kos and SEIU showed Hochul leading by four points (35 percent to 31 percent). And in the final week, two more surveys, one from PPP and one from Siena College, both showed the Democrat leading by similar margins.

The combination of the trend toward Hochul and the Democratic turnout advantage are the strongest evidence available that her victory was about far more than a split in the Republican ranks caused by Davis' third-party candidacy. The Medicare issue presents Democrats with a potent message.

While Republicans may disagree with that, both parties ought to agree with the conclusion offered Tuesday night by Steven Law, CEO of the American Crossroads, the Republican fundraising group founded by Karl Rove that supported Corwin.

"This election is a wake-up call for anyone who thinks that 2012 will be just like 2010. It's going to be a tougher environment," Law said, "Democrats will be more competitive."