They conducted Q&A sessions, signings, posed for photos and met hundreds of members of the armed forces. This was the first time that female authors had been sent by the USO into a combat zone. We asked Kathy Reichs and Sandra Brown to share their experiences. 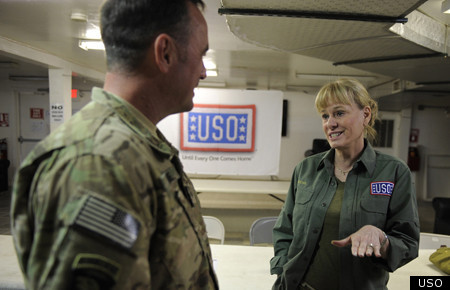 It is day six of my first USO tour. I am in the Middle East with Operation Thriller II, today in Afghanistan.

The weather has been dry all week, warm while the sun shines, cold at night. This morning it is cool and the mountains are obscured by mist.

We are a band of seven--Jeremy Wilcox, our USO tour manager, Michael Theiler, our tour photographer, and five thriller writers, Mark Bowden, Sandra Brown, Clive Cussler, Andrew Peterson, and myself. Each day we travel to different sites, visiting hospitals, base operation centers and facilities whose acronyms are not entirely clear to me.

We meet soldiers, sailors, airmen, and Marines. We dine with them, chat, sign books, pose for pictures and listen to their stories. Most of all, we thank them for their service, and express the appreciation of the folks back home. And, without exception, they thank us for coming to brighten their day. To demonstrate that they are not forgotten.

Our days begin at dawn, with rare exceptions, and end well past dark. I share quarters in a B-hut with Sandra, space is little larger than my purse (which I should have left back home in Charlotte!) As a woman it is particularly challenging to have to hike over rock and mud to the communal latrine and shower. Sandra and I have foregone all pretense at make-up and coiffure and have developed a routine for maintenance of basic hygiene. (You'll love the glamour shot pictures.)

Nevertheless, I would do it all over again. Being here has shown me that my temporary discomfort is nothing compared to the daily sacrifices made by our members of service. I see young men barely out of high school. Young women barely tall enough to keep the barrels of their M-16's from touching the ground. Gray-haired civilian contractors working to build infrastructure. They are all truly impressive.

How to sum up the experience? Exhausting. Exhilarating. Surprising. Moving. Most of all, gratifying. 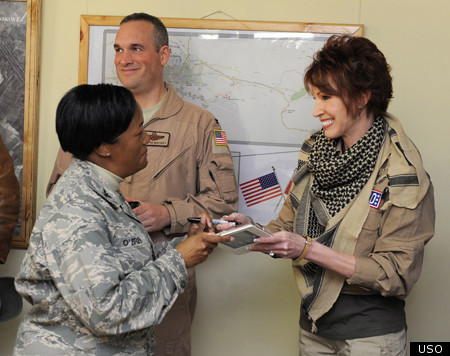 I remember clearly the day I was asked if I would even consider "going to Middle East on a USO tour." I said, "Sign me up."

Of course, it was sobering to learn the Middle East was used generically, when the group's destination was actually Afghanistan, a theater of war. Contemplating being there was sober, but the opportunity of a lifetime that I couldn't say no to. What a rare and wonderful chance to thank our servicemen and women, an experience that millions of America would love to have. It's been my aim to thank each one I meet, to tell him or her in person how much their contribution and sacrifice means to the American people.

The irony is that they've been thanking us! They've been so appreciative of our coming. I--all of us in the group--have been moved by the welcome we've received, especially in some of the remote bases where "visitors" are extremely rare. I can attest to the talent, patience, fortitude, courage, humility, commitment and patriotism of our service members. They're outstanding.

Among the more memorable experiences have been the tour of two hospitals. Another, flying at night in a C130 with our group members and sixty sleeping Marines. You have to wear earplugs because of the engine noise, so you're basically deaf. They fly with all lights out, so you can't see. It's sensory deprivation. Weird! And the bathroom situation... if you MUST go, it's behind a curtain, on a platform about thirty inches off the ground, on which you must climb in body armor and helmet (an extra forty-pounds), and then if you make it that far, it's a skill test in aim. I don't recommend it.

However, my most humiliating experience was being blown down by a Black Hawk. Literally. We were all on the Tarmac (if that's what you call it in military parlance) when one of the "birds" lifted off. I went tumbling for about fifteen yards, before being stopped by a wall. I wasn't hurt, but since I was in full gear, I was sprawled on my back and couldn't get up. I can laugh about it now, but it wasn't my best moment!

Among my colleagues, we've had a lot of laughs. Kathy has been a great roommate. We have the same "neat" habits, same craving for sleep, same body thermostat... so in very close quarters and in less-than-ritzy accommodations (that's a joke, by the way), things have been simpatico. The old "misery loves company syndrome!" She, Andy, Mark, and Clive have been great traveling companions, and I'm happy to have shared this incredible experience with them.

I wouldn't trade a minute of it!