One of the most important Senate battles before us today is the race between Pennsylvania's Katie McGinty, Democrat, and Pat Toomey, Republican.

Daughter of a policeman ("a cop who walked the beat") and a restaurant hostess, Katie McGinty has always been in touch with real life and its problems.

"I know how hard my parents worked to provide for our family... today, too many families are struggling to make ends meet..."--Katie McGinty, personal statement. 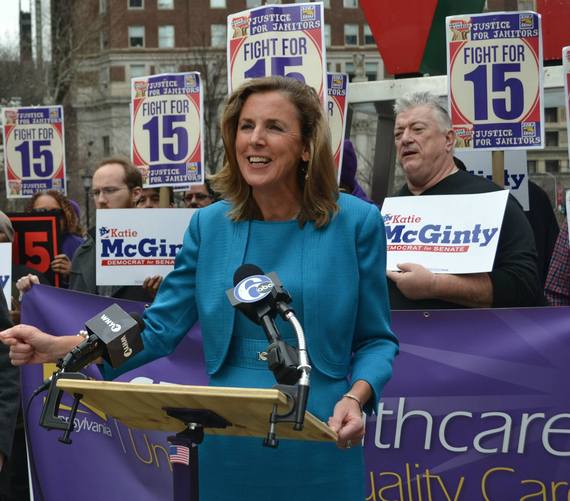 In a moment, I want to share some of what Ms. McGinty hopes to accomplish for the working families of Pennsylvania and our country--and why she has climbed in the polls from 12 points down to 3 points up.

But first, let me tell you a personal story about Pennslvania.

In 1963, when I was twenty, I wanted to become the Olympic weightlifting champion of the world. The fact that I had no particular talent along these lines did not seem important.

I wanted to train with America's greatest weightlifters, at the York Barbell Club (YBC), in York, Pennsylvania, national champions more than three dozen times. My wanting to train there was like an average college basketball player showing up at the Golden State Warriors headquarters and saying, "Hi, guys! I'm in!"

But I was young.

Fresh out of the Army, I moved to Pottstown, a city not far from York.

I found work at a steel reclamation plant, scouring rust and old paint off scrap metal, and my hands turned gray from the solvent.

That paid for food, and a room at the YMCA.

Every Saturday I would hitch-hike to York and watch the champions train.

But then the snow began to fall and my outdoor job went away. Things became difficult.

Some days I sat in the labor office all morning, watching my breath rise, hoping for a few hours' work unloading trucks.

One week I earned eight dollars, and the rent was twelve; I had to sneak past the man behind the desk.
But every evening, at six o'clock, the church bells would play songs, uniting the community with music.
And I had one great advantage.

Because I was a veteran, I was eligible for G.I. Bill benefits, and when those kicked in, it would pay for some college.

Katie McGinty understands about that. She wants to "expand the promise of high-quality public education from universal pre-K through elementary school to college, to give our student... pathways for lifelong success."

This is no pie-in-the-sky liberal fantasy--just real-life problem solving. If people have a decent education, including college and/or trade school, they have a chance at a good life.

But without that education?

I remember the people at the edges of the scrap heaps, pawing through the rubble, hoping to find something they could sell.

One man had a suitcase he kept near him always, with a change of clothes inside. But he had no way to shower, so he kept changing the same dirty clothes back and forth, maintaining an illusion of cleanliness.

Another woman talked to herself. "That's Crazy Annie", someone said, adding "I hope she makes it through the Winter."

Once I thought I had a burst appendix, and had to go to the emergency room at the hospital, having neither money nor insurance. But they kept me overnight for observation, and fed me two meals and the pain went away.

And in the Spring I went to York again.

A labor job opened up, and I pushed barrels of protein powder around, and eventually became assistant editor of "Strength and Health", York's weightlifting magazine.

I was never the strongest man in the world, but I did compete nationally, with best lifts of 290 press, 250 snatch, and 345 in the clean and jerk.

And from that day to this, I smile when I hear the word Pennsylvania.

As I was back then, Katie McGinty is young and strong and hopeful, with her eyes fixed on the future. She sees America's best days still before us.

But she is also a realist. Having grown up in a family of twelve, she knows what plain hard work is all about.

I love that her father was a cop "who walked the beat". An officer who walks on foot through the neighborhood he serves? That is someone who knows the people, and they know him, and will be far less likely to exchange gunfire.

And her Mom, who served plates of food to customers? Who sees people up close better than a waitress?

McGinty has plenty of book learning, no question. She worked for President Bill Clinton as Chair of the Council on Environmental Quality.

But above all she understands real-life problems, because she has lived them.

To me, Pat Toomey is just one more slick conservative millionaire Republican.

Particularly irritating is his failure in the Supreme Court nomination of Judge Merrick Garland: Toomey refuses to abide by his Constitutional duty to allow the President to nominate a Supreme Court justice, and to have that nomination be heard in the Senate. No one questions the ability, honor and experience of Judge Garland; blocking his hearing is political obstructionism, pure and simple.

He is against embryonic stem cell research-

--which in California is being tested on attempts to cure paralysis, blindness, diabetes and other previously incurable conditions.

He even seems unable to make up his mind about trusting Donald Trump with the nuclear codes. It is a straightforward question, which Ms. McGinty has asked him over and over: does he trust the Republican Presidential candidate with the ability to decide nuclear war?

He will not answer. Maybe Toomey's problem is he knows the answer, and is just too timid to say it out loud.

If you don't know Katie McGinty, I suggest a visit to her website:

I just went there myself, and chipped in $25, hardly worth mentioning--except a strong Democrat needs every nickel she can get. You know the kind of money the opposition can throw against her!

No matter where you live, Katie McGinty's victory matters to you. Control of the Senate is so close we can almost touch it.

What if a win by McGinty meant Democratic control of the Senate, allowing President Hillary to nominate Supreme Court justices--to clean up the corruption in the campaign system?
That would change America for the better--for generations.

We dare not lose the Pennsylvania Senate race.

Don C. Reed is the author of the new book "STEM CELL BATTLES: Proposition 71 and Beyond: How Ordinary People Can Fight Back Against the Crushing Burden of Chronic Disease", available now at Amazon.com.