For years, Katie and Doug Sanders were stuck in their version of the suburban slog. He worked long hours as a systems operator for a software company; she home-schooled their children during the day and ran two dance studios at night. They lived in a three-bedroom home they'd bought in a suburb of Colorado Springs.

Despite having three healthy and happy children from Katie's previous marriage and bringing home a combined income of more than $100,000 a year, the pair felt stressed and unfulfilled. As the subprime mortgage crisis set in, they could no longer afford their monthly mortgage payments and struggled to go out to dinner or take vacations, which were their only outlets for rest and recuperation.

"We were always trying to make more money, thinking, as soon as we get this much, we can do this or that," Katie, 40, told The Huffington Post. "We were just working ourselves to death looking for more money."

Change came in baby steps. First, they got rid of cable, then their home phone. They downgraded to the most basic Internet package and kept only one car, which they'd already paid off. They started selling herbal products at farmers markets on the weekends (Katie is a certified herbalist). Within a month of making changes, in January 2009, they moved into a rental home in a quieter town that cost half of what they were paying on their mortgage.

About three years later, the Sanders moved into a small two-bedroom, two-bathroom rental in rural Colorado that they have turned into what Katie calls a "mini-farm." There are chickens, alpacas and goats (in addition to a swarm of cats and dogs), and gardens where they have steadily learned to grow fruits, vegetables and herbs. They make money selling homemade beauty products and tinctures, herbal extracts made from alcohol and chopped herbs, at farmers markets and online. They no longer allow themselves to take on debt.

As ex-suburbanites-turned-"farmsteaders," the pace of the Sanders' new life is dramatically different from what it once was. Doug works a few days a week at a local coffee shop for a little extra cash, but mostly for fun, Katie said.

"Right now, we get up and take care of the farm animals. Then we'll have coffee. I'll write; Doug reads, then he goes to the coffee shop or we clean the house," Katie said. "We might have our granddaughter over. We'll fill some orders, and then watch 'The Voice' -- with a goat on my lap."

The summer season, which lasts from May to October, is more of a blur: They are up at dawn harvesting their gardens and packing up medicines and concoctions to sell at the farmers market, where they stay until about 4 p.m. "Then we'll have a beer, make dinner and go to bed," Katie said. The difference, she added, is that they're able to exercise far more control over when they work, though not necessarily how hard.

"Time is what I'm after," Katie said. "Life is so short that I just want to be able to do what I want to do." 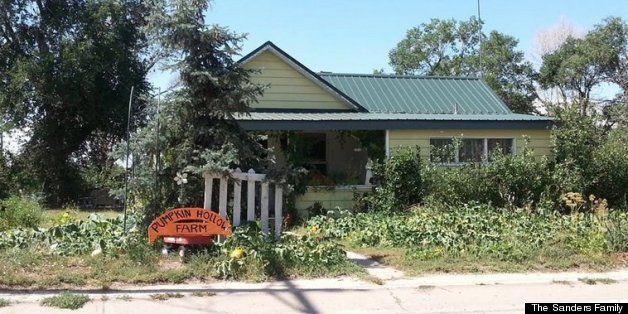 The Sanders' home in rural Colorado.

The family now spends a lot less money on basics since they grow and preserve their own food, barter with other farmers for humanely-grown meat, make their own cheese, and eat eggs from their own chickens. They say that relative self-sufficiency has given them more time to enjoy each other and the challenges of learning how to run a farm.

Although Katie's children no longer live at home, she says they have come to appreciate farm life (she delights in catching them snuggling with the goats) and have learned to embrace minimalism in their own ways. Her 21-year-old son does not have a credit card, and even though he and his fiance are throwing themselves a wedding, they will do so without going into any debt.

Occasionally, Katie gets what she calls "a case of the gimmies," like when she recently salivated, momentarily, over a new truck bought by a couple in her beekeeping class. "Then I think, 'I have to give up x number of hours per week to pay for that truck, when that could've been time sitting on my swing, having a cup of tea,'" Katie said. For her, the trade-off is not worth it.