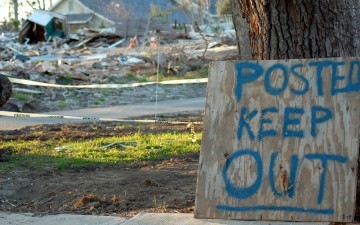 This week marks the 10th anniversary of Hurricane Katrina, and the U.S. Army Corp of Engineers, forever changing New Orleans and the Gulf Coast. There will be hundreds of events in commemoration of a crisis so big some still struggle to find words to convey their experience or grief.

Anyone who's spent any time beyond the tourist traps of New Orleans knows it's impossible for residents to forget the hurricane. From those who opted to ride out the storm and lived through hell, to young adults who were mere children a decade ago, to those who decided to call New Orleans home after Katrina, the hurricane is not something that leaves you.

From the whitening of New Orleans, to the new houses replacing the flooded homes grandparents bought after WWII, the former public housing that is now mixed income and mostly unaffordable to original inhabitants and the people who suffer from panic attacks whenever a storm approaches, the hurricane is with us, daily.

If you drive around long enough, you can still see remnants of brightly colored X's on some houses. If you listen to locals talk long enough, you'll hear a passing Katrina reference or two. New Orleans is an easy-going yet complicated city that is like no other in the world. That's exactly why so many people, sometimes with little more than grit, determination and an unyielding desire for home, decided to return even when there was nothing to return to.

Some say the city is moving in the right direction while others absolutely disagree. Louisiana State University's Reilly Center for Media and Public Affairs' report "Views of Recovery Ten Years after Katrina and Rita" shows 78 percent of White residents believe Louisiana has "mostly recovered," while 59 percent of Black residents say it has "mostly not recovered."

Over a million people have a Katrina story to tell and we're dedicating this week to exploring those stories. And while many narratives include sorrow, we will not fetishize suffering. Instead, we'll provide context, tell the truth and celebrate the resiliency of New Orleans and her people.