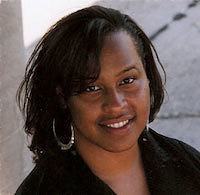 Colette Pichon Battle gave up a great job working as a corporate immigration lawyer in Washington DC to live in a tent in front of her flooded family home 50 miles from downtown New Orleans. She is now a much honored director of a small but powerful non-profit climate justice human rights firm advocating all along the Gulf Coast. Why the big change in her life? Katrina, climate justice and fish dinners.

Pichon Battle's extensive South Louisiana French Creole Catholic family live in Slidell along Bayou Vincent, which connects directly to Lake Ponchartrain. Free people of color, on her mother's side, who have lived there since the 1700s can trace their roots back to France. Family roots also include people from the Chocktaw Nation and the Caddo Tribe.

Mom was her biggest inspiration. Mom attended segregated public schools before graduating from Southern University at New Orleans. Mom, now a French teacher, was one of the first African Americans in the Peace Corps where she spent years teaching in Morocco. Dad played football at Southern and for the NFL Saints and Browns.

After high school, Pichon Battle wanted to leave the race problems of the South so she applied all over, even Alaska, and won a great scholarship to attend Kenyon College in Ohio. Her extended family stepped up and put on fish dinners to pay for her airfare to and from Ohio.

Pichon Battle's international studies at Kenyon allowed her to study abroad in Morocco. "Walking in the streets every day surrounded by brown people was terrific! For the first time in my life I was surrounded by people who looked like me," she said. "For the first time I blended in the majority culture. For the first time in my life I did not always have to represent all black people!" Later, she was awarded a post-graduate Thomas J. Watson Fellowship to spend another year in Africa. So she returned to live and study in Mauritania, Morocco and Senegal studying religious culture and practices in North and West Africa.

Pichon Battle returned to the US and attended Southern University Law Center because it was a historically black institution and they gave her a most generous scholarship offer. She found it a vivid contrast to the private white well-resourced Kenyon College but she again did well. When it was time for the Louisiana bar, her family put on more fish dinners to pay the fees and costs.

Pichon Battle always wanted to live in Washington DC. She got her chance in 2004 when she joined a Northern Virginia law firm that did business immigration work for high profile internet and tech companies. She enjoyed living and working there and was learning a lot.

Then in August of 2005, Katrina hit the Gulf Coast.

In DC, she watched with horror as her home town was hit with storm surges of twenty feet totally flooding the town.

She started hearing from family members. "I got text messages about people being cut out of their roofs and others spending eight hours in water. Some held onto trees until the water receded. Some could not hold on," she recalled.

"When I came back people said "Oh great Coco is home, maybe she can help us with all these papers." I did not know disasters generated so much paper. People were being asked, in the middle of trauma, to sign away rights and legal documents on property and your land that are going to have ramifications for generations. They needed help reading and understanding the papers. When I helped people, they began to thank me and cry.

"It was then I knew that the community that had bought fish dinners to send me to college and law school now needed me to bring back the things I had learned. They invested in me and in my education and my ability to connect to the rest of the world. I felt a loving obligation to come home and help."

So in 2006, Pichon Battle moved back home to help out for a while. For the first two months, she lived in a tent on the front lawn of her family home. Then she moved into her family's 240 square foot FEMA trailer in Slidell. She started a non-profit law firm, Moving Forward Gulf Coast, dedicated to informing people about their rights and helping them protect them. That trailer was her home for the next 24 months.

Pichon Battle was still living in that trailer when she was recognized by the American Bar Association in 2006 as one of the "Lawyers Who Made a Difference." Her work took her across Texas, Louisiana, Mississippi and Alabama as Program Director of the Gulf Coast Fellowship for Community Transformation which trained community members and groups across the Gulf in organizing, advocacy, and leadership. She worked with many groups including Oxfam, the Deep South Center for Environmental Justice, and other organizations. For Oxfam, she did policy lobbying in Louisiana and Mississippi and helped communities develop multi-racial, cross regional campaigns for low-wage workers and immigrants.

"Five years after Katrina, I was ready to move back to DC. But then in 2010 the BP disaster happened.

"I knew BP was going to be a legal fight. I knew this meant triple the amount of paperwork to the same communities that were just recovering from Katrina. That was the moment I decided to stay.

Pichon Battle also serves a lead coordinator for Gulf South Rising, a regional initiative around climate justice in the South. They organized a 33 person delegation to go to Paris to participate in the United Nations Framework Convention on Climate Change in late 2015. Delegation participants came from the Gulf States of Texas, Louisiana, Mississippi, Alabama and Florida. "Our hope is that leaders of Gulf South recognize they have not only remedies within the U.S. legal system and justice system, but ... internationally. We're part of a global South dealing with impacts of extraction. We need to broaden our viewpoint."

Her organization provides community legal clinics which share legal assistance in areas such as immigration, business development, expungements, FEMA, BP damages issues, and DACA (Deferred Action for Childhood Arrivals). She puts on trainings in racial justice and human rights for local elected black officials and school boards. She recently partnered with the Alabama Coalition for Immigrant Justice to put on a DACA clinic in rural Alabama that attracted over 250 agricultural workers. She does combination expungement and DACA clinics with the Vietnamese community partners like VAYLA.

Her theory of change is that "justice seekers must first be of service to the most rejected of our society. Then we can help develop leaders. Then we can help them develop strategies. Then support their actions to bring about better policies and laws. We need to help people take their power back. Helping them do that is not charity."

Her advice to law students and other advocates? "One, it is never too late to start the work of justice. Two, everything you have been through is helpful to where you are going. Three, have courage. Four, understand that winning cases is not the same as getting justice for people. Five, start in your own community. I always thought I would end up going to Africa to help people, but Katrina showed me I have to focus on my own community. Six, watch out for privilege in the social justice community. If there is no accountability to the communities we serve, it builds resentment instead of alliance. Seven, love the legal system, it is fantastic. For all its flaws it is a good profession. But, make sure to love it enough to change it to make it fair!"

For a more detailed version of this article see here.