It was the first thing you saw as you came through an arch at the National Gallery of Jamaica for the 2014 Jamaica Biennial: Katrina Coombs's blood red work entitled "Absence." I remember looking at the work for quite a while, its startling color. The longer I looked at the work the more I found myself wondering what other pieces by this artist might look like and, finally walking away, I made a mental note to look for more fiber-based works from Jamaican artists in general, and Katrina Coombs in particular.

Katrina Coombs was born in Kingston, Jamaica, and was formally introduced to the arts in third form at Meadowbrook High School. "What happened is that there was an art teacher at the school, David Ho-Sang, who introduced us to macramé. That was when my interest in fibers started and soon that interest would grow into a profound love," she shared. From macramé she would branch out to batiks and other arts techniques, but the love of fibers remained constant. "I guess you could say I have a fetish for fibers," she confessed. "I love being able to create from threads. I love the idea of taking something from a small strand into something large and elegant. I love the involved process of working with pins and needles."

From high school Coombs would go on to attend the Edna Manley College of Visual and Performing Arts in Kingston, which she describes as an eye-opening and very challenging experience. "When I was a student at the Edna Manley College, textile as fine arts was still a relatively new concept. The textiles department had to bring in lecturers from other departments to look at and critique my work. I was getting more and more interested in weaving, which isn't a traditional Jamaican art form, unless you look at basketry, so I guess there was some confusion in trying to locate and situate my work as a fine artist working with cloth."

Maybe, she mused, the lack of understanding for fiber and textile as a fine-art art form that she was sensing all around her on the island had to do in part with the demise of a booming textile industry in Jamaica -- lost through free trade agreements. "There was just a whole industry of people who made cloth and designed and decorated cloth that went through the window because of free trade agreements," she said. "A similar thing happened to much of our traditional so-called "craft" industry where much of the local crafts forms today are actually being made in China."

But the loss of the textile industry, she was quick to point out to me, only partly explains the resistance she faced as a fine-art fiber artist. "While my immediate family members were always supportive of me as a fiber artist, there were a lot of people around me who were confused by what I was doing. They saw me sewing things and would ask aloud about not only what was I going to do with the things I was making, but if indeed I planned on becoming a dressmaker, as if being a dressmaker was the worst thing in the world that someone could be! But that confusion, to an extent, mirrors a larger societal confusion as to what art is. For too many people art is still and will only be drawing, sculpture and painting. There is oftentimes no immediate understanding of textile art as a viable art form."

Yet her thesis exhibition at the Edna Manley College, "Dancer's Dream" -- a work in which she examined the various elements of fabric movement and how this could be in conversation with the movements of a dancer -- was well received. "I guess the reason why my thesis received the warm reception that it did is that so many people were taken with the 'new' ways in which I was working with cloth. There was a healthy discussion, for example, as to whether my work was a sculpture or a painting -- and there was a new awareness of fiber as fine art," she said.

Coombs would go on to do her master's degree at Transart Institute in Berlin and New York, which, she admits, radically altered how she saw her work. She credits Transart with engendering in her a more expansive definition of being an artist. "In a sense, going to Transart freed me. What I mean by this is that, here in Jamaica you are often defined by the medium that you work in. For a long time I considered myself, for example, a textile artist. It was at Transart that I came to understand that I was an artist first and foremost and fiber was the medium that I created in," she told me.

At Transart her work became increasingly autobiographical, culminating in a thesis exhibition that explored various notions of the "other". This work -- a compilation of thirteen characters -- sought to answer several questions, namely: Who is the other, and why do they impact us as much? What form does the other take? How can an artist use fibers to signify the other that she is in pursuit of?

It is a complex and engaging body of work.

"It is not that there are no male textile artists on the island or that men are not interested in textiles and fibers," Coombs pointed out to me. "It is the mode by which men approach the work that they do in textiles and fibers. You will find, for example, that you have a large group of tailors. There are also very sharp and pointed distinctions made between fine and applied arts on the island. Once you are working with textiles, you are often relegated to crafts. Maybe why there aren't more male fine artists who work in textiles on the island is that they are trying to obviate being relegated to the crafts."

She paused for a moment before continuing.

"In addition to which, in general fiber art is a very complex medium to deal in. The medium requires a lot of focus, a lot of technical skills, the tying of knots, and working with all those threads. There is a lot of monotony in working in fibers, which, for me, is a commentary on female labor and the fact that women are constantly repeating things. The home space, which to a large extent is still the female space, is one of endless repetition with specifically female tasks. Furthermore, at this time on the island, I am not sure if there is an infrastructure in place to safeguard and protect fibers and textiles as art forms. Handling and restoration are a particular challenge. My thinking is that more male artists might be making the calculus to choose art forms that are more financially lucrative and less repetitive and less problematic than is required for working in textiles and fibers."

But the very reasons why fiber art forms might be off-putting for some is in large part why Katrina Coombs enjoys so much working within this medium. Textiles, Coombs noted, are a constant throughout the many moments and journeys of our lives. Shortly after we are born we are enveloped in cloth, and for most of our lives we have the most intimate relationship to clothes. When we die, once again, we are wrapped in cloth. In some ways it is the most obvious and accessible of all the art forms.

Katrina Coombs's work will be on view at the Young Talent 2015 exhibition at the National Gallery of Jamaica in Kingston, which opens on August 30th. "I am very excited to be part of this exhibition," Coombs shared. "For many years, as a curatorial assistant, I promoted the work of other artists. Right now I am taking some time to pay more attention to my own work. My goal now is to keep pushing myself as an artist, and to get more of an audience for my work." 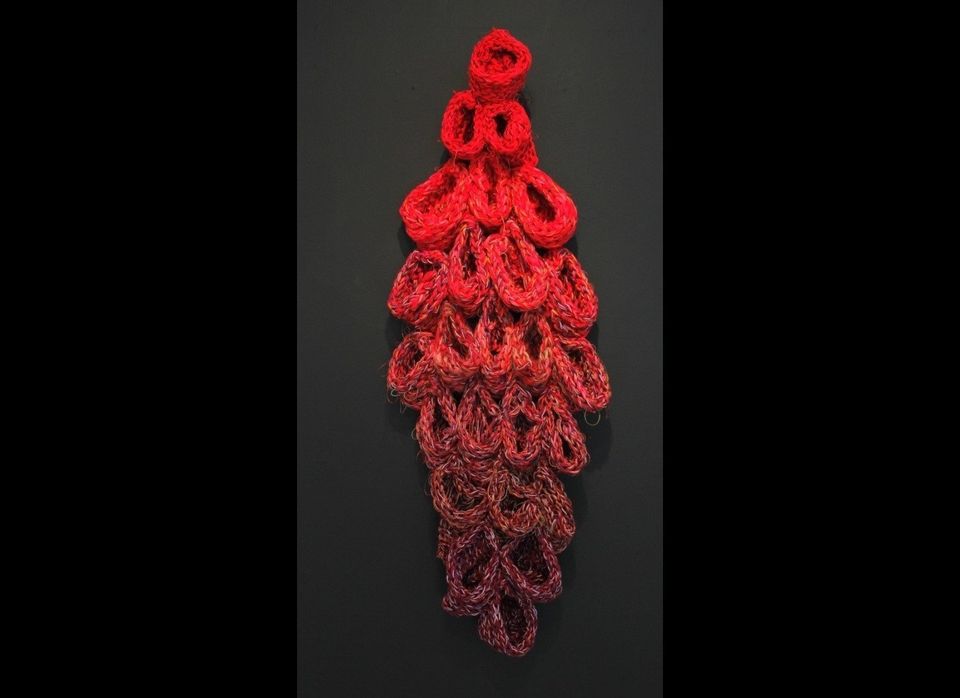