In the days and weeks after the levees broke in New Orleans during Hurricane Katrina, many members of Congress blamed the flood victims for their predicament. One Congressman proposed punishment for those who did not evacuate. Another proposed requiring survivors to get a job to qualify for housing assistance.

This behavior sprung from the wrong belief that the victims knew this sort of flooding disaster could happen to them and thus the victims are undeserving of help.

This wrong-headed behavior persisted, even though the most insistent of appeals from public officials to south Louisiana residents to evacuate never warned that the levees could break due to improper design and construction.

This fact was reiterated at the Society of Professional Journalists' annual convention in New Orleans last week on the Whirlwind Disaster Tour of the levee failures. The 40-plus group included David Levitt from Bloomberg News, Sharon Mittelman, correspondent for CBS News and many other notables.

Author and award-winning reporter Mark Scheifstein and I spoke to the media representatives about the catastrophic failure of the Army Corps of Engineers' levee system in 2005.

During his talk, Mr. Schleifstein referenced a 5-part series he wrote in 2002 called Washing Away. The series, based on modeling projections by the LSU Hurricane Center, predicted massive flooding of New Orleans in a direct hit from a powerful hurricane.

"But what we didn't know," Schleifstein said, "was that the levees could actually breach and fail. We knew the levees could get over-topped by storm surge, but we never imagined what we saw during Katrina." 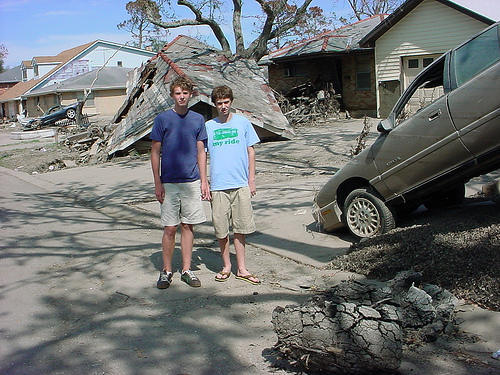 Later, when I gave my own remarks, I commended Mr. Schleifstein for blasting a myth, the myth that the residents of New Orleans knew the levees could break, but chose to stay anyway. Before Katrina, only one person, that we know of, predicted the levees might breach and that is meteorologist and blogger, Dr. Jeff Masters.

"It was common knowledge among meteorologists that the levees in New Orleans could not hold back the waters in the event of a direct hit by a Category 4 or stronger hurricane," wrote Dr. Masters in response to my inquiry about his sadly accurate prediction.

"I was heartened when the storm weakened to Category 3 strength at landfall and missed making a direct hit on New Orleans, bringing a storm surge of only a Category 1 - 2 hurricane, since the levees were supposed to hold for that kind of storm," he continued. "Tragically, the levees failed when they should have held."

I asked Dr. Masters if he issued an alarm to everyone in the city to evacuate in addition to his blog posts in the days preceding the 2005 storm. Did he make a phone call or send an email to the Mayor of New Orleans or the Governor of Louisiana?

"I did not make any communications about the danger New Orleans faced, other than what I wrote in my blog," Dr. Masters responded.

Levees.org's mission is education on the true root cause of the catastrophic flooding during Katrina. In line with that mission, our website contains a page of Myth Busters. We are always happy when others ally with us to blast harmful myths which are detrimental to the recovery of the New Orleans region. And on that Whirlwind Tour, an important myth-busting endeavor about the flooding actually came from a Corps of Engineers spokesman. Ken Holder told the bus-full of media representatives that it was the Corps of Engineers that is responsible for the failure of the levee system and the flooding of New Orleans.

"Ms. Rosenthal didn't say it, probably because she is too nice and she knows I am standing here," Mr. Holder said. "But the responsibility for the flooding belongs to us, the Corps of Engineers." As Carl Strock, Commander of the Corps of Engineers admitted, "we had a catastrophic failure with one of our projects."

I know that what Mr Holder said is true because I heard it myself on June 1, 2006 at a press conference at the New Orleans Marriott. When my turn came during the Q&A session, I asked Lt. General Strock a question.

"Did you know that as the storm was churning towards the city that the levees were going to break and fail and cause all that death and destruction," I asked.

"No," he said. "But you always knew that this could happen."

We, the residents of New Orleans, did not know. It appears that no one ever imagined the Corps of Engineers' levees could actually break and fail in Katrina's storm surge. As observed by the authors of Catastrophe in the Making about those who did not evacuate:

"While many of those who remained behind had little choice in the matter, many others reasoned that they could easily ride out the hurricane in their own homes. It is another easily overlooked fact that those people were, for the most part, quite right in their calculations."

And so today, Levees.org is publishing its Myth Buster Number 7: even the most insistent appeals from public officials to south Louisiana residents to evacuate did not warn that the levees could break and fail.