Katy Perry was not unknown to us here at The Beat Museum -- after all, for a while she was married to Russell Brand, who in 2007 participated in a cross-country road trip commemorating On the Road's 50th Anniversary. At the end of the journey, Russell did a live performance about Kerouac here at the Beat Museum that was recorded by the BBC and later broadcast all over the UK. This was before Forgetting Sarah Marshall hit it big. The BBC had contacted us weeks prior and asked if they could record an up and coming comedian who was about to make a splash with a U.S. debut. Turns out Russell was a big Kerouac fan, and had retraced Jack's journeys in On The Road across the US for the BBC, with a final stop here in San Francisco at The Beat Museum. 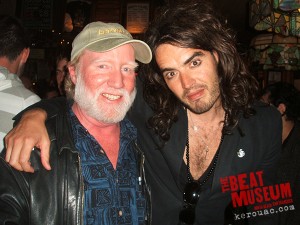 Russell was a pretty interesting guy. I liked him. He really understood Kerouac, and I remember thinking while I watched his live performance, "This guy's pretty funny in an outrageous sort of way. I wonder if he'll make it here in the States?" Russell was very approachable and very casual, but also very focused and deliberate right before he went on stage. Made sense to me -- he was doing a live performance in front of an audience of about 100 and it was being recorded for broadcast for millions. When the show was over he let his hair down (!) and we all went for drinks over at Vesuvio.

Now I don't know if Katy read On The Road before she met Russell or not, but it sounds like it made a pretty big impression on her, as well. It turns out her big hit, "Firework," was inspired by probably the single most famous line Kerouac ever wrote:

...the only people for me are the mad ones, the ones who are mad to live, mad to talk, mad to be saved, desirous of everything at the same time, the ones who never yawn or say a commonplace thing but burn, burn, burn like fabulous yellow roman candles exploding like spiders across the stars and in the middle you see the blue centerlight pop and everybody goes, "Awww!"

Now in the first video (top of page), during the live interview, Katy kind of garbles the quote. I'm not faulting her for it -- she is, after all, a civilian and not a Kerouac aficionado like the likes of us here at The Beat Museum. Her heart was in the right place and she certainly summarizes the spirit of Kerouac's message well.

In the YouTube video below, "Firework" has racked up over 273,000,000 views, a pretty impressive showing by any measure.

I really liked this video. You gotta love a girl who's got fireworks shooting out of her chest and who encourages others to go make their own light in the world. It's all about Tolerance and Compassion and living with Courage and Authenticity. It encourages people who are different or considered to be "less than" by some to go make their own way and to not be afraid.

Katy Perry and Russell Brand -- they may have gone splitsville, but The Beat lives on.