Lately, Katy Perry has been looking to the past for outfit inspiration. The fearless dresser channeled the roaring 20's in a flapper look at an event this month and even wore a sheer glittery body suit à la Britney Spears (not to mention Jennifer Lopez) during a performance.

But yesterday she gave a nod to her own past, donning another unconventional brassiere. The now infamous cupcake bra Perry wore in her "California Gurls" video garnered the singer quite a bit of attention, so we suspect she was giving a cheeky reference to the look in her latest unconventional undergarment: a bra made of film reels.

The skivvies were actually quite appropriate for the occasion, considering she was performing at the premiere of her 3D movie "Katy Perry: Part Of Me." The rolls of film acted as a full top, wrapping around her shoulders as straps all the way down to her waist. The stripped skirt looked like an upside down popcorn container and even had oversized pieces of the movie snack dangling from the hem -- a salute to Nicki Minaj's popcorn dress, Katy?

As far as her ever-changing hair color, she seems to have landed on a purple tint as of late, and we're actually digging the shade. The overall outfit is not your typical movie premiere ensemble (which is why she wore a red velvet, '50s inspired dress on the red carpet), and maybe some people may be tired of seeing Perry with random objects on her bust. But, hey, at least she was wearing a bra this time.

What do you think of Katy Perry's movie premiere performance look? Check out the photos and tell us what you think. 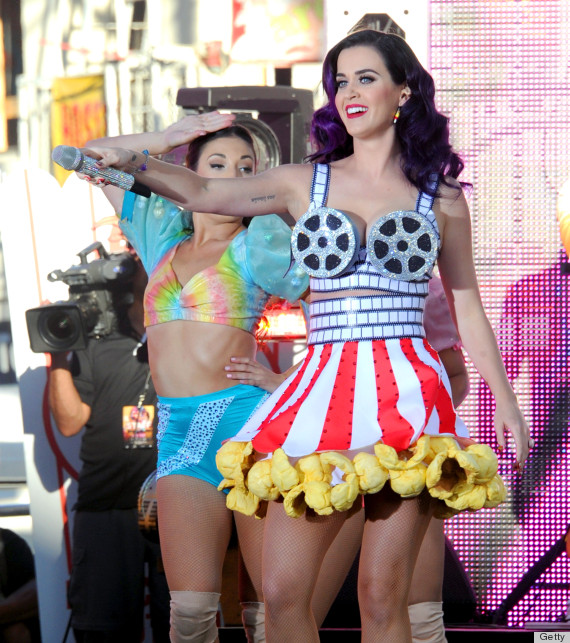 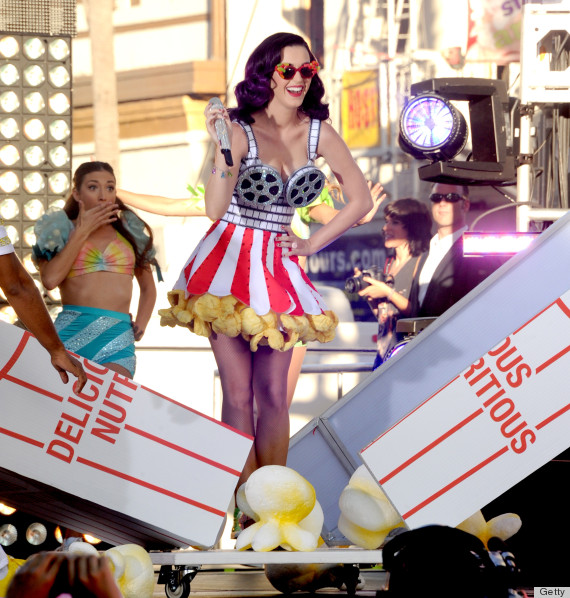