KAUPOA, MOLOKAI — In its recent heyday, Kaupoa beach village on the island of Molokai was another of Hawaii's idyllic getaways — a place where visitors lounged in the sun in long pillowed beach chairs as they sipped fruit drinks while coco palms fanned in the breeze overhead.

They played in the day and sometimes frolicked in the night. But then it ended, and the passage of time can give the impression that all that is left at the beach village are the ghosts of lost pleasures.

A visitor hears it in the creaking children's swings that sway lazily in the breeze.

It is written on the signs that guide visitors toward the beach cottages that are now broken cabins amid headless palm trees.

Kaupoa means "Place of Thieves." If they are still here, it is only as ghosts. 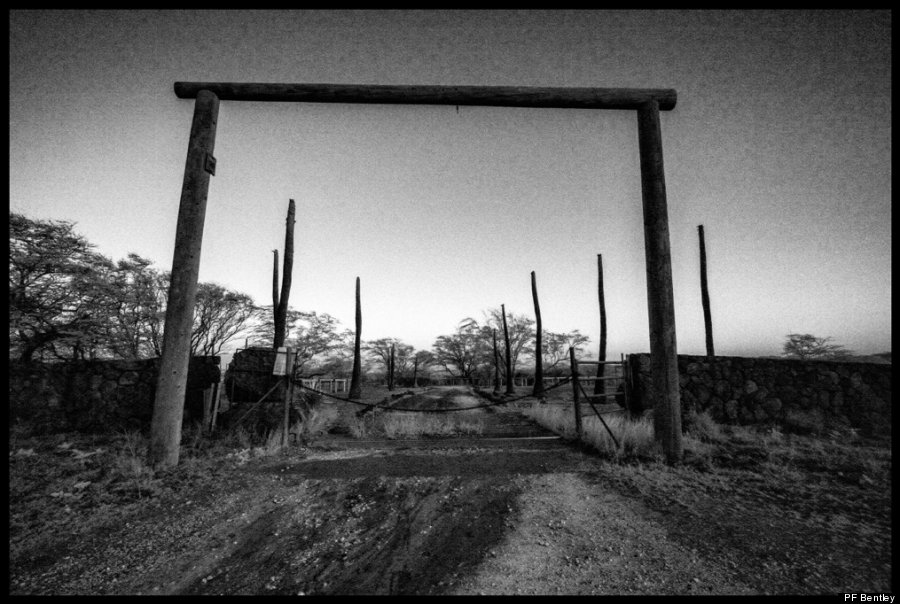 The palm trees, which aren't indigenous to Molokai, were brought into the area for shade and to create ambiance around the grounds.

But when Molokai Ranch closed down the company’s tourism operations they had the tops of the trees cut off for insurance reasons; they didn't want coconuts or branches falling on people who might pass through.

Some locals interpret that action as an ancient Polynesian declaration of war. In this case, they saw it as Molokai Ranch's parting shot at the island community after it voted to reject plans to develop 200 luxury homes at La'au Point. 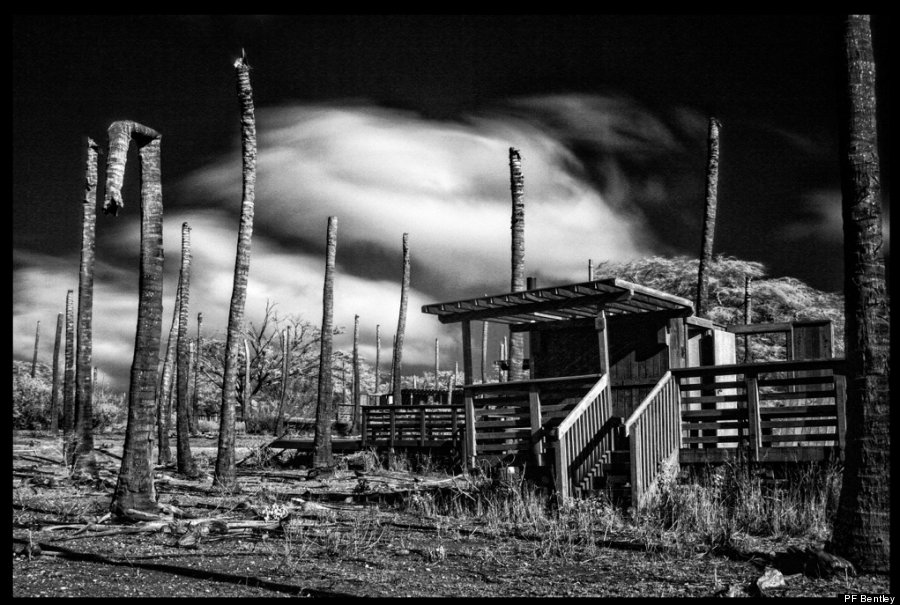 Kaupoa’s most recent life was as a beach hotel, consisting of luxury "tentalows" — like bungalows made of canvas tents — owned and operated by Molokai Ranch from 1997 until 2001 before operations were handed off to Sheraton Hotels, which ran it from 2001 until 2004.

These photographs are mostly of the abandoned beach camp but there are also many hidden archeological sites in the vicinity.

A Hideout for Criminals

The area was abandoned in the early 1800’s as Hawaiians’ curiosity about the outside world took over. (Sometimes local men would simply swim out to whaling ships that were sailing by.)

Kaupoa's location and the transient population helped to make it into a natural hideout for people who had violated the kapu system. (There wasn’t a lot of incentive to stick around and face justice when the punishment for such crimes was death.)

Modern day Molokai kupuna (elders) recount that the transient population was drawn to the shorelines of the west end where the fish were plentiful. 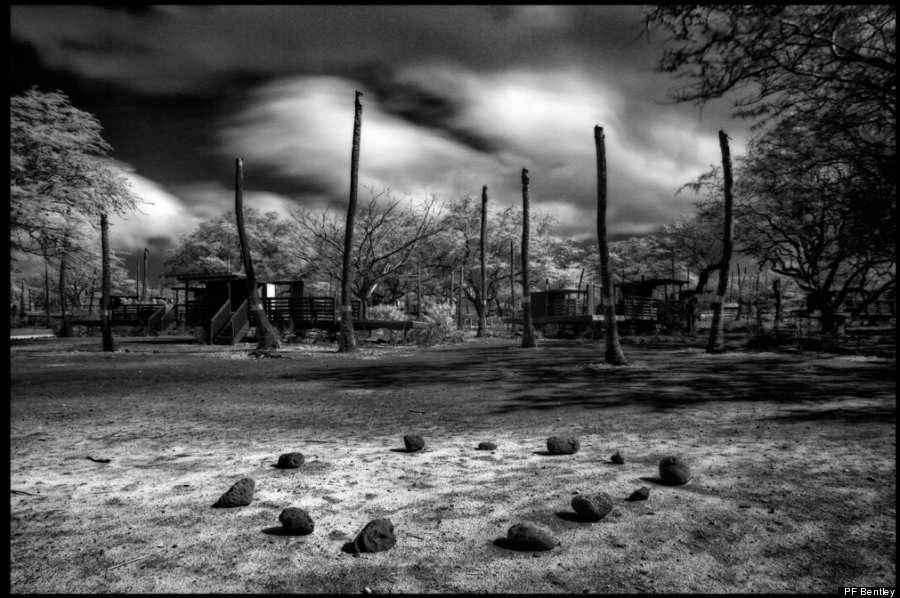 Those people from the northern shore would come from the pali — in this case, a cliff — of Kaulapapa to the west end. Their journey would take them through Naiwa, Hoolehua, Moomomi, Keonalele, and they would sometimes go past Kaupoa to Ilio for the fishing.

Some showed up early in the season. Others came later on, to steal early arrivals' He'e, Kala, Moi — seafood — as it dried in the sun while the owners fished down by the shore.

Many shrines — called Koa — to the fishing god Kuula are located between Kaunala and Laau, which includes this area of Kaupoa.

Known burials were marked within the campsite, which was identified by local Kupuna who spent most of their lives fishing around here.

Some of the photos show artifacts that can still be found at one of the Koa shrines at the entrance of Kaupoa Beach Village.

Sweet potatoes were grown on farm sites in the area, and some remain even now.

Going up the road, there are ahus — road markers that helped Hawaiians find their way up the ahapuaa (swaths of land) from the beach to the mountain. 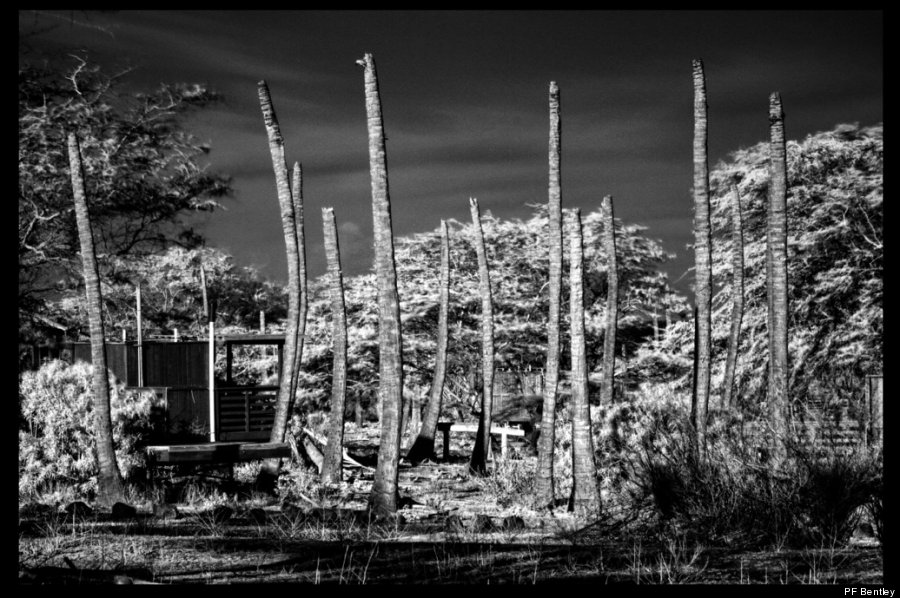 Before Kaupoa was opened to the public as a beach camp-style hotel in the late 1990s, local kupuna told the ranch to plant kukui trees at what now is the stone entrance to the camp.

The kukkui trees dispel kalohe (rascal) spirits. As long as the trees remained, the camp would flourish and the rascals wouldn't enter.

Kukui hele po — the lantern in the tree — was the bright light.

The American Sugar Company began to make sugar cane on the land. Later the Cooke family bought it and Molokai Ranch became a place to raise cattle, produce honey and plant sweet potato and wheat.

But eventually Molokai Ranch cut down the trees and built a stone wall entrance that still stands.

It was downhill after that. A few years later the hotel closed. Without the kukui tree’s protection, the rascal spirits got in.

Before the Molokai Ranch Lodge opened in 1999, soon after the opening of a “tentalow” village with luxury camping at Kaupoa Beach, the kupuna slept on the grounds one night.

They surmised that the the spirits of their ancestors longed to hear children (keiki) playing again and the ranch built a playground area that includes swings, a jungle gym and a slide.

These days only the wind touches that playground.

It is unclear what Molokai Ranch’s future plans are for the Kaupoa area. 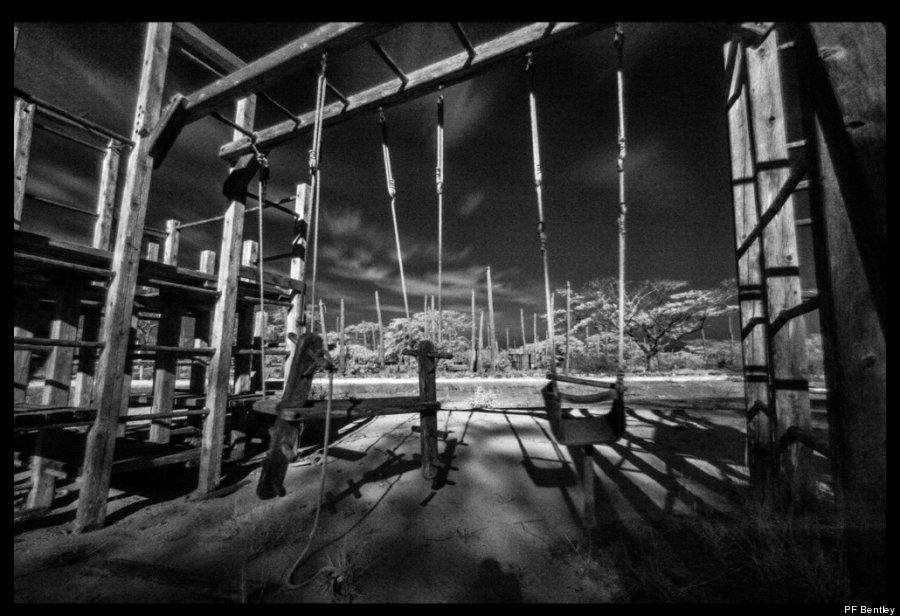