"I'm not sure in aggregate that charter schools are even raising the bar," he says.

Madati, 39, who oversees entertainment marketing strategy for Facebook, doubles as the chairman of the Atlanta Heights Charter School, in Atlanta, which he founded.

The school just finished its first year only to have a state Supreme Court decision scrap its constitutionality under state law.

Because of issues around how the school was chartered, the court ruled that the school couldn't operate in Georgia until it was re-certified.

Big players in the education reform movement, from Michelle Rhee to Bill Gates to members of the Obama administration, have embraced charter schools with brio. That passion has fed the highly polarized debate around how well charter schools educate students in comparison to traditional public schools.

Madati, who says skepticism is what brought him to the cause of school reform in the first place, avoids taking sides in that argument -- to the extent that he can.

"This is not the be-all and end-all solution," he said. "In any one area when a charter school opens up, it only serves one segment of the population. What do you say about other segments of the area? The other 98 percent?" 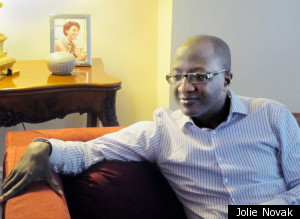 Madati was born in Norway, and grew up in Dar Es Salaam, Tanzania. His parents divorced, and he moved with his brother and mother to England when he was two. He attended a boarding school, "like many African kids in England."

"My mother worked her tail off," he said. "We were a poor, poor family. She put everything that she could toward making sure that we got a good education."

"Race determined access in England," he recalled. "College was never part of my future. I was always going to be a working-class guy. If you would have asked me about the college entry exam at age 12, I would have said, 'No.' I never aspired to it."

When Madati was 12, his mother died. An American couple his parents befriended while working in Tanzania swooped in and moved the children to Manhattan's tony Upper East Side.

He suddenly found himself attending an elite private preparatory school, Riverdale Country School, for eighth grade. He began working on his college essay during freshman year of high school.

"For the first time in my life, I began to enjoy learning and working hard because teachers were telling me lots of things were possible," he says. "Not going to college isn't discussed. It's not an option."

"It completely changed my trajectory," he adds. "That's the first time I was innately aware that education could make a difference in someone's life."

Charter schools are publicly funded but can be privately run. Independent groups start charter schools with public-school funds, yet in return for a renewal process based on achieving goals articulated in a charter document, they have more flexibility around management and educational programs: their teachers need not be unionized, for example.

As educators try to improve performance of students at traditional public schools, charter schools are springing up as a popular, if patchy, fix.

A new data set released Monday by the National Alliance of Public Charter Schools shows that 1.8 million students attended 5,277 charter schools in the 2010-2011 school year -- an increase of 11.8 percent over the previous year.

And the National Alliance for Public Charter Schools hosted its annual conference in Atlanta this week, featuring such speakers as Bill Clinton, Newark Mayor Cory Booker and U.S. Secretary of Education Arne Duncan.

"Charter schools can play an important role in school reform by offering high-quality public school options," he said. "I look forward to working with leaders in the charter school community, both to broaden their impact on strengthening the education system in states and communities and to enhance quality and accountability throughout the charter school sector."

Despite such momentum, charter schools have attracted controversy. Criticism centers on the resources charters take away from traditional public schools; the ease with which they can fire teachers; the concern that the presence of charters creates two tracks within the public school system; and the schools' possible failure to serve students with special needs.

The overall efficacy of charter schools remains unclear. A 2009 Stanford University report, lauded as most authoritative research yet on the issue, concluded that 17 percent of the charter schools studied outperform public schools and 37 percent "deliver results that are significantly worse" than those expected of traditional public schools.

Detractors also blast charter schools as a dangerous step toward a mass privatization of public schools and contend misguided business leaders are developing corporate reform policies for schools from on high.

For his part, Madati doesn't care if he's tagged as an opportunistic businessman.

"Yes, education is a business," he says. "That doesn’t mean there's evil intent behind it. But I usually avoid these questions. I don't think about it."

In fact, he says, public education needs an injection of business savvy. "It's more about the business of accountability, of setting goals and targets, of tracking strategic plans against objectives, at looking at outputs and adjusting along the way," Madati says. "That discipline is foreign to education."

To that end, Madati's two charter schools -- the second is in Brooklyn -- partnered with an education management organization, or EMO, called National Heritage Academies, to run the school's day-to-day activities. The board, Madati explained, oversaw hiring and set the school's vision, while the EMO, a for-profit company, implemented it.

EMOs run networks of schools and generally provide charter schools with curricula, testing formulae, teacher pay scales and fill funding gaps. Critics have taken EMOs to task for introducing a broad range of for-profit activities in an educational environment. Madati is indifferent to such criticism.

"EMOs should not be making money off the backs of kids, people say," Madati noted. "The only thing that I care about is after you've given me the right amount of money to run the school, are we delivering against the measurement targets that I am accountable to? If we are able to do it without endangering the program or the scope of our mission, I don’t care how much money they make off of it."

After high school, Madati attended Georgetown University and majored in American Studies, writing a thesis on the importance of merit-based affirmative action. After graduation, he went to work for the car manufacturer BMW.

"I had not thought about ways of giving back except writing checks here and there," he recalls.

While working at BMW he met a technology executive, Omar Wasow, who was trying to start a charter school in Brooklyn. Madati needed some convincing.

"In any one area when a charter school fills up, it only serves one segment of the population," Madati recalls telling Wasow. "What do you say about everyone else?"

Wasow responded that the larger problem is systemic, Madati remembers -- and charter schools forced the system to "look at itself harder."

"It's a band-aid fix," Madati responded.

They agreed on one thing, though: for a small segment of the student population, usually those who are in impoverished areas with severely underperforming schools, a good charter school could be a boon.

A few weeks later, Wasow called Madati on the phone and asked him to serve on the board of his New York City charter school. Despite his initial skepticism, Madati decided to explore something new.

"He's got an inner yenta. He's always trying to help people make matches, whether it's in relationships or business," Wasow says of Madati. "He might have been a Jewish grandmother in another life."

With other board members, Madati and Wasow navigated the lengthy charter-school authorization process in New York City. In 2003, after picking National Heritage as a management partner, they opened the Brooklyn Excelsior Charter School -- to a rocky start.

He says that some of his biggest mistakes included failing to track performance closely and not providing enough professional development help for teachers.

Over the first two years, students' test scores were low. Madati doubted that the school's charter would be renewed. "We buckled down as smart business people do," he says. He moved the school to a data-measurement model that didn’t wait until the annual release of state exam scores to track student achievement.

"We could drill down to a second grade teacher -- xyz isn’t doing as well as the other cohorts," he recalls. "What can we do to adjust that? We would then turn around to the principal and the school leadership team and say, 'Ok, you see what we see, what's your plan?'"

Madati, who eventually served as chair of the school's board after Wasow's departure, said that he and his team redoubled their efforts to assess student performance and brought in teaching coaches.

The school's most recent supervisory report -- generally positive, filed by a state charter-school authority after a May 2010 visit -- lauded the school's assessment policies and its effectiveness "in helping at-risk students succeed academically." But the report listed academic rigor as an area with room for growth.

The school is imperfect, the report concludes, with management and behavioral issues sometimes limiting learning -- but, the report notes, it is much improved.

After leaving BMW in 2004, Madati worked for a number of companies, including CNN, before joining Facebook in March. While at CNN and living in Atlanta, he got the bug again. He decided to open another charter school there.

He decided to build his new charter school in an Atlanta neighborhood the public school district defined as an "area of need."

The local district denied his application twice, stating that, among other things, his proposal in Atlanta had failed to gain community support. But a 2008 law that created the Georgia Charter Schools Commission as an independent charter-school authorizer gave Madati some recourse by allowing him to apply for approval under that new entity, rather than the local district.

Atlanta Heights Charter School opened its doors in the fall of 2010. "Our school sticks out like the Taj Mahal in the area," said its principal, Melissa Jones Clarke. "The kids think it's Christmas."

National Heritage Academies, Madati's management partner, funded the school's $3 million building. About 94 percent of the school's students are eligible for free or reduced-price lunch. Parents of students took part in a survey that indicated a 95 percent satisfaction rate with the school.

With Georgia's charter commission shut down, the Atlanta Heights school can only open for its second year with the approval of either the city or the state. The city would be preferable, Madati said, because of budget cuts at the state level.

After the Atlanta school board ignored his application because of a missed deadline, he took his case to a state review board last week.

"I'm bullish about us being approved," he says. He won't know his school's fate until the end of June.

Having moved to Los Angeles to take the Facebook job, Madati is now considering new opportunities.

"Charters are not in favor in California these days," he said. "But I've asked."