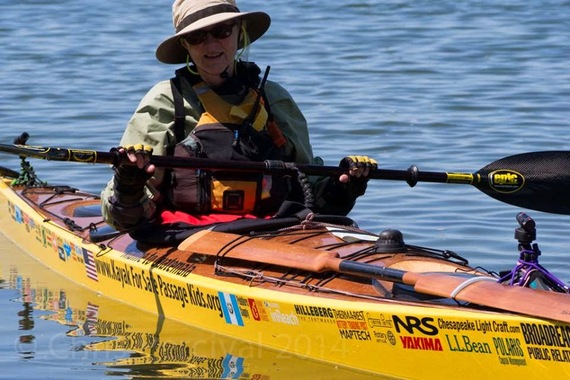 In mid-July Dr. Deborah Walters, a 63-year-old grandmother, launched a kayaking trip 2500 miles from Maine to Guatemala, solo. No stranger to wilderness, she once camped alone near polar bears on a six-week expedition to the Arctic. Now she's paddling to raise awareness for Safe Passage, an education program for the severely impoverished families who live inside the teeming garbage dumps near Guatemala City.

Dr. Walter's trip has been seven years in the making. "Safe Passage is dear to my heart. I knew I had to get involved," she said.

For example, on August 7 she will land at Center Point in Pleasure Bay in South Boston and will do four presentation events in and around Boston. Then it's back into her kayak to the next stopping point.

About nine years ago she visited the dumps near Guatemala City and the methane gas, rot, and stench made it almost unbearable. Yet families dwell in shanties built on landfill created by tons of waste. Every day they scavenge through mammoth filth for anything to be sold or recycled. It was there Walters spoke to the parents of children served by Safe Passage and realized the difference it has made.

The government does very little to help the children, and Walters said, "A few years ago there was a huge dump fire. It shut down the airport, and finally the government stepped in and said that children under 14 could not be allowed in the dump, but the families still live in the landfill part of the dump.

"There are estimates of 10,000 people in the dump community and we serve a percentage of them. It is making a difference."

For the last 15 years, Safe Passage (Camino Seguro) has served this forgotten population. Founded in 1999 by Hanley Denning, an American, she came to Guatemala to study Spanish, but was moved to action by the desperate plight of the poor. It began with schooling 46 children. Now Safe Passage operates an early childhood center and adult literacy program, all housed in a separate and safe location. Denning was killed in a car accident in 2007, but her work continues through volunteers like Dr. Walters who will speak at various venues along coastal stops of her 2,500-mile trip, all to bring attention and help to Safe Passage.

During the journey, Dr. Walters will need help. The waters along the Mexican coast are treacherous, and small craft are warned of pirates, drug cartels, and being attacked at gunpoint. From Key West to Belize, Dr. Walters and her kayak will be carried aboard a boat owned by supporter Bernie Horn, President of Polaris Capital Management in Boston and crewed by Safe Passage board member Richard Howe of Milton. Once in safer waters, Dr. Walters again will paddle solo for 250 miles along the Barrier Reef and open coast to reach Guatemala.

"I like meeting people and I love learning from them. I spent three hours with a kid in Guatemala. I was so pleased that at the end, the young boy said, 'You are my teacher and I am your teacher and we are equal.'
"Any little thing that changes the way they look at themselves is wonderful."