Releasing an album no longer guarantees success in an industry where platinum-selling singers face the same pressures as fledgling artists. Yet, when Keane frontman Tom Chaplin kicked off a 15-date North American tour in Atlanta this weekend to celebrate his solo debut, The Wave, he proved that talent and heart still matter as much as the numbers do. In a triumphant return to the U.S. after more than four years away, Chaplin raised the roof with a dozen new songs that showcased his stellar vocal abilities - and also shared stories about his recovery from drug addiction.

Chaplin's 90-minute set at the Buckhead Theatre included favorites "Everybody's Changing" and "Bend and Break" from Keane's 2004 debut, Hopes and Fears, as well as the current single, "Still Waiting." The Wave's "Hardened Heart" and "Bring the Rain" (co-written by Chaplin and Max McElligott ) recalled the joyous rave-ups for which Keane is best known, while "The River" (penned with Aqualung) suggested a clearer pop direction. Chaplin's backing band did not pretend to be a replacement for Keane, but instead found its own earthier path as drummer Sebastian Sternberg and multi-instrumentalists Tobie Tripp, Beau Holland, and Rose Langley brought verve to the arrangements with strings and harmonies.

The intimate audience of 400 fans never relented in its cheering, except to make room for two quiet confessions: "Solid Gold," in which Chaplin dedicated to his 'long suffering' wife for sticking with him during years of substance abuse relapse, and "Worthless Words," with a delicate falsetto bridge and apologetic refrain. Deep into the set, when he sang "Quicksand" in honor of his toddler daughter, Chaplin bounced with nervous excitement as he promised to pick her up when dreams 'fall through, screw you, and batter you to black and blue.' In that moment, it was impossible not to root for a permanently happy ending to the singer's much-publicized struggles.

In our pre-show interview at a nearby café, Chaplin says making The Wave was less about running away from his former bandmates (including formidable tunesmith Tim Rice-Oxley) and more about having the space to dig into something heavier: the reasons why he kept putting his body on the line for the false elation of a chemical high.

"Being a drug addict is horrible and exhausting," he says. "It can lead you to death, but it forced me into a corner. All my energy towards this album started at my lowest point. I wanted to get it all down [on record] and [by the middle of 2015], I was on a roll."

Chaplin says The Wave's themes drew upon his psychoanalysis sessions and conversations with his wife over the past few years. The raw demo vocal on "Bound Together" feels like a 21st century take on The Beatles' "Norwegian Wood;" the satisfying mantra of "Cheating Death" promises 'just keep believing/you've got the strength to go on;' and "Hardened Heart" moves from desperation into self-forgiveness as Chaplin sings of being 'stuck on a road of sadness with nowhere to go' but keeps insisting, 'it's a beautiful world.'

"Those words come from a very dark place, knowing you've hurt everyone that's close to you," he says. "A lot of people have commented online about the song and said that it could have been written about their depression. For me, the depression was self-induced."

Chaplin is not alone in his use of music as a mechanism for recovery; artists in many genres have made albums about their journeys to sobriety - from Eric Clapton and Bonnie Raitt to Keith Urban and Eminem, some of whom went on to have the biggest hits of their careers after getting clean. Like others who have pursued projects outside of the bands that made them famous, Chaplin says the "door is open" for future possibilities with or without Keane. During our interview, he mentions how much fun he's had playing around with covers of Sia and Bruno Mars songs and writing unexpectedly sturdy ballads with songwriters who've made hits for stars like Cher and Enrique Iglesias. Although The Wave is rooted in the same pop-rock style that helped "Somewhere Only We Know" break through on mainstream radio when Keane embarked on its first U.S. tour more than a decade ago, Chaplin is firmly on a path to a solo career, if he chooses to stay the course.

"It was easy for me to slip into the life of the charming, jocular guy in Keane, but I wasn't facing my truth," he says. "The only way I could get well was to talk, and to be open and vulnerable for the for first time in my life. It wasn't as scary as I thought it was going to be. I could actually breathe again." 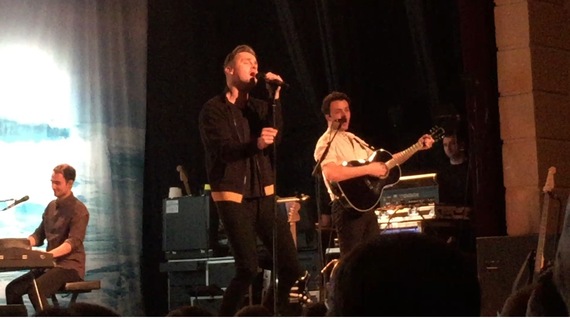