Iranian filmmaking great Abbas Kiarostami once said that cameras in the digital age have allowed the artist in him "to always bring along a small, discreet, lightweight companion on my real and imaginary travels." It is no secret that masters like him, and Jafar Panahi, as well as quite possibly contemporary Iranian cinema as a whole could not exist these days without the trusted digital camera, in all its privacy-conscious and high-definition splendor. Just think of the nightmare of filming something as intimate as Kiarostami's Ten with a bulky Panavision camera taking up the whole front seat of the taxi...

Yet there are some who say conventional film techniques and the 16mm or 35mm cameras are what making films is all about. The preparation, the scene set up, the adrenaline of the actors who know they have to try to get it right the first time, the anticipation for the traditional watching of the dailies each night. Those rituals all conspire to create the illusion of the movies, what give audiences the experience they crave.

In an upcoming film titled Side By Side, Keanu Reeves as well as director Chris Kenneally and producer Justin Szlasa ask a provocative question: What does the future of filmmaking hold, and can the two formats -- digital and film -- both survive and thrive, "side by side"? The answer will inspire but more importantly, the film will captivate, every single shot of every single interview, scene and explanation. I never thought watching a film about techniques and cameras would be so fascinating, but then again, we are talking about the magic of the movies. 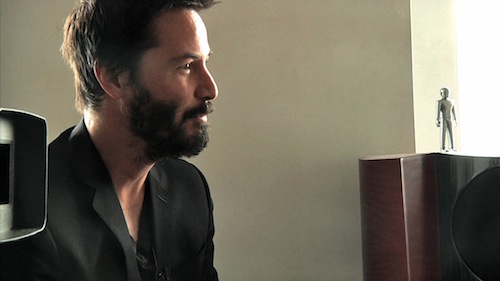 I caught up with Kenneally and Szlasa at this year's Tribeca Film Festival and asked them a few questions about their film and oh yeah, working with Keanu Reeves, who when Scorsese, Danny Boyle and Christopher Nolan are in the hot seat, manages to put all other interviewers (including this one) to shame.

How did the first seed of an idea come about?

CHRIS: I was working on a movie called Henry's Crime with Keanu Reeves; he was the producer and also acted in it, and I was the post-production supervisor. It was, I think, the first time that Keanu produced and he was really curious about how everything worked with the lab and technicolor, the digital and the whole process. So I got to spend a lot of time with him and he and I had a lot of discussions about filmmaking, the way things are changing, the way digital technology is changing filmmaking and those conversations just led us to the idea. One day Keanu said to me "Hey, why don't we make a documentary about this?" because we both felt like we were at a really important moment in time. Film has been around for about a hundred years and now digital technology is really starting to creep up "side by side" to film. So he approached me and asked me if I wanted to direct it and I said ABSOLUTELY.

It was a wonderful surprise to discover what a great interviewer Keanu Reeves is. Did you know he had this tremendous ability before you started shooting?

CHRIS: I had never met him until Henry's Crime. But from day one, and I don't know if everyone knows this about him, Keanu is a truly nice, kind, passionate person. He's interested in things, he's smart, he's just great to be around and I think whether he's Keanu Reeves or whatever, that would come across when he talks to people. But since he is in the same industry, I think people felt comfortable, you know, he was a peer and someone they could talk to. I'm glad you said that because I think that's one of the nice things about this movie is that you get interviews from people who are really unguarded, relaxed and truly funny, which I like as a filmmaker. WOW, people are funny and this is a movie, a documentary, that you might not expect you'd be this entertained to watch.

I want to ask you, Justin, when you came onto the project, and also did you know that it was going to be such a fascinating film? Because when I tell people what it's about they say "oh"... And I'm so enthusiastic about it, they almost can't believe I'm talking about a doc on film and digital filmmaking... But it feels like a human story except it's about two characters who are not human.

JUSTIN: Chris got in touch with me early November 2010 and we went to have a cup of coffee at a place in Gramercy. Chris was pitching me the idea for the film and I was like "Man, sounds like this is going to be really boring." But then I was thinking I like the subject, it's got Keanu, a wildcard, I hadn't met him yet. So I thought alright, the challenge of this is going to be to make it not boring, but the thing is, it didn't take long. In fact, it was the first set of interviews we did, we were at this film festival in Poland which focuses on cinematography and that's when everyone just realized that this was going to be something great, because the people we were interviewing, these directors of photography who are really behind-the-scenes guys, but really masters of their art, have so much passion and so much energy and so many strong and different opinions. So between their energy and what Keanu brought to the table, I think at that point our whole crew just realized we got something here, we are onto something that's really important and passionate.

Was there an ideal of a film you had in mind, while you were making Side By Side?

CHRIS: Like an example? Not really and that's what made it difficult. There was no book that I had in mind that I was making the doc version of, or film that I'd seen, or film that I'd made. You know, I'm from a story background, there's a character going on a journey, overcoming obstacles. And I thought how am I going to do this? I didn't want to make a boring movie, that was one of my main goals. It slowly developed and luckily, like we said, Keanu was able bring out these really nice interviews with people. I think we made a movie that helps, or rather after you see the doc, I think it makes you appreciate movies more and even some of the clips that are in the movie, you see them through different eyes because you have a different sensibility about it.

The helpful aspect of having Keanu Reeves on the film was probably that he opened doors which may have not been opened otherwise. What were instead some of the challenges of having someone with such a big name in your film?

CHRIS: I don't think there were any challenges with having Keanu involved in the movie, whether he was a famous Keanu Reeves or just Keanu Reeves the person. We had a small crew. Keanu, myself, Justin, a DP and sometimes another cameraman, sometimes not. We were all equal with carrying crap and renting vans and making calls but yeah, definitely having Keanu's name helped us approach some of these bigger name directors. And also the more interviews we had in the bag, the list that we could send to someone when we were requesting theirs, sometimes we didn't even need Keanu to make the call or help, they knew he was involved, oh, you've interviewed Martin Scorsese and David Lynch, I'd like to be included in that movie as well. I think that's how it kind of worked.

Three words that describe each of you two?

CHRIS: I guess I could say what I'd like to be described as by other people. I don't know if it's for me to say... I would like to be an honest person, a kind person and a responsible person. I'm not sure I achieve any of those things! But that's what I strive for.

JUSTIN: I think you have ideals and you approach those ideals and they are ideals exactly because you never reach them. But yeah, what I want to be is evil, conniving and mean. No, I'm kidding!

Although as a producer you may need that!

JUSTIN: I really like producing and I like keeping things rolling on time and keeping people focused but then also being able to work in a way that, I hope, can bring out the best in people.

CHRIS: I think what I respect about Justin is that he's always doing his best for the project, that's where all his decision making, and actions come from and you could not ask for more from a partner or a producer and I truly feel that.

Side By Side opens in selected cities starting Aug. 17 and will be available On-Demand throughout the U.S. from Aug. 22.