They're 50% black, 50% white. 100% Nerd. Go figure. Left to their own devices and dull lives, not a lot of excitement comes their way. Until that fateful day when a lost and forlorn kitty shows up at the door. Then all hell breaks loose, and Rell (Jordan Peele) and his cousin Clarence (Keegan-Michael Key) have to step out of their milk-toast comfort zone and into gang life. Their metamorphous is hysterical. 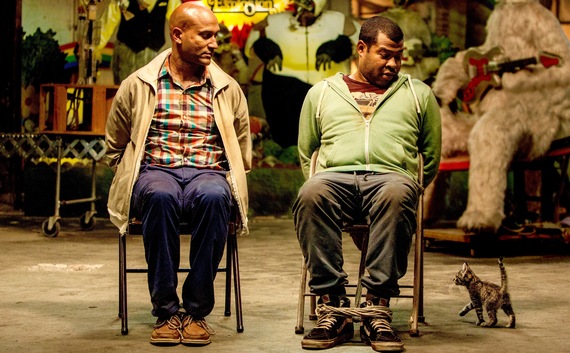 For fans of the comedy duo Key & Peele their constant shtick about being mixed-race homeboys trying to find their way in life is familiar comic territory. Their now shuttered half-hour Comedy Central series of the same name was blessed with quick wit, satire, racial and social humor, and the kitchen sink. Not much has changed for this feature film, except a purrrrrfectly sweet kitten that steals scenes. The script is written by Peele and Alex Rubens (Key & Peele, Community) and directed by Peter Atencio (Key & Peele). If audiences feel that watching this movie is like watching an extended 90 minutes of a TV show, blame or credit the writers and director. TV is what they know.

A kitty shows up at Rell's door. The lonely loser adopts the feral orphan, naming it Keanu. When Rell and Clarence take in a movie, they return home to find his apartment ransacked and the cat gone. They question Rell's neighbor and dope dealer Hulka (Will Forte, SNL), who points them in the direction of a local gang named the Blips (a Crips and Bloods hybrid) and the gang leader Cheddar (Method Man). Turns out the big cheese wants to keep the cat and will only give it back to the boys, who have been acting like hoodlums to up their street cred, if they help him sell a new wonder drug.

What's important in this fish-out-of-water story is that Key & Peele get to run amuck and showcase their silliness on the silver screen. Best scenes: 1. Clarence in a van waiting for a drug deal to go down and coaching four gang members as they sing along to George Michael songs and debate why the singer abandoned his Wham partner Andrew Ridgeley. 2. Rell stuck inside the palatial home of actress Anna Faris and watching her get shot to death by a female Blip member named Hi-C (Tiffany Haddish). The look on Rell's face is priceless. 3. When the duo walks into a stripper bar inhabited by the menacing 17th Street Blips gang and Clarence orders a White Wine Spritzer.

The two leads are the heart of this funny movie. In the age of Obama, they're modern comics blowing their melting pot life experiences out of proportion and having a field day with the odd juxtaposition of biracial nerds trying to be ghetto. You'd think their shtick would wear thin quickly, but 100 minutes later, you're still laughing at their idiocy.

Peter Atencio's direction is decent for someone whose comfort zone is TV, but not great. Several scenes drag and feel like they needed to be clipped. He and editor Nicholas Monsour could have used a stopwatch. They're best together when they choreograph and time the violent Matrix-like shoot 'em up action scenes. Abby O'Sullivan's costume designs peak with the black stocking cap and gold chain she made for Keanu when he becomes part of a gang. It's such a funny visual. Not sure how cinematographer Jas Shelton managed to shoot the cat in so many dangerous escape sequences, but that can remain his secret (blue screen).

Method Man and Tiffany Haddish are as believable as they can be as comedy gangsters. Nia Long has a line at the end of the film that is very raunchy and humorous when she discovers that Clarence has grown a set of testicles. Wait for it.

Walk in the theater not expecting much. Walk out charmed and happy. Key & Peele will have that kind of affect on you. And that little furball that plays Keanu is worth his weight in catnip.