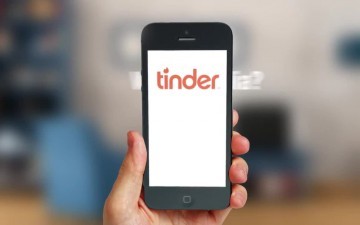 Like tons of other Americans, I found the more than two-dozen tweets shared by Tinder on Twitter regarding a recent profile in Vanity Fair to be hilarious, almost as hilarious as the many tweets that mocked and followed it. The big deal? Nancy Jo Sales blames dating apps, and particularly Tinder, for what one person she interviews calls a "dating apocalypse." Ouch. Sales's report says much of what we already know: that people use Tinder to hookup. Not only is the idea that Tinder provides a space for people to gain access to potential sex partners old news, but so is hookup culture overall.

As columnist Chelsea G. Summers (@chelseasummers) tweeted, "I love how writers are constantly bemoaning hookup culture like people haven't been boning in fields and at masked parties for millennia." And as author and feminist Roxane Gay (@rgay) reminded many, "It's interesting. People of my generation have managed to 'hook up' just fine without an app."

According to Nancy Jo Sales, "Hookup culture, which has been percolating for about a hundred years, has collided with dating apps, which have acted like a wayward meteor on the now dinosaur-like rituals of courtship," and that's the issue Sales and many others have with the app. Superficially and obsessively swiping right and left at the sight of hundreds of "matches" is making traditional dating more difficult than we've ever seen. And by traditional dating, I mean dating that focuses on committed, monogamous relationships, and which leads to marriage and families. In fact, comedian Aziz Ansari released a book in June, Modern Romance, that focuses precisely on how apps like Tinder are making finding authentic love more complicated.

This may all be true. Tinder may be making hooking up easier and more accessible than settling down. But I wonder whether that is a bad thing. I can admit that I'm a traditionalist when it comes to relationships. I'm almost 40. I've been married. I still believe and desire monogamous relationships based in traditional courtship. But I'm also evolved and feminist enough to understand that all women (and men) don't share the same ideas about dating, relationships, marriage and families that I do, and that's okay.

For instance, a good female friend uses Tinder to meet "friends with benefits"--men she will find interesting enough to hang out with and attractive enough to sleep with. She's not at a point in her life where she wants the responsibilities or hassles of a conventional relationship. It happens, and I'm kind of glad Tinder offers her the option to find what she's looking for.

And although hooking up is nothing new, the idea that women are openly and shamelessly choosing casual (and sometimes not so casual) sex found through a phone app is. This is what I find to be the mainstay in the conversations I've seen regarding why Tinder is the boogeyman.

These exchanges assume every woman wants to get married and have kids, and they don't. (As a matter of fact, many women haven't historically, but we see they're clearer about vocalizing that fact now.) Maybe apps like Tinder (or Hinge) allow women to date like men, and we're mad. Mad that women have more options than ever before to find pleasure through hookup sex, and also being very superficial about who they hookup with. (Because what's more superficial than looking at photos of someone, reading five words about them, and deciding whether they're worth communicating with or not?)

Be clear: I'm not saying women shouldn't be more superficial when dating and sexing. Because I think many women could stand to be more visually focused regarding who they choose to date (or sleep with). Men are often allowed to date (only) women they find attractive, but women are often judged as shallow if they dare to do the same.

I'm by all means not saying that Tinder (and apps like it) are providing some men who prey on some women's desire to have traditional relationships (knowing they don't have the same goals) wide open access to hundreds. One of Nancy Jo Sales's interviewees, Alex, says this: "I just wanna hang out, be friends, see what happens... If I were ever in a court of law I could point to the transcript... I think to an extent it is, like, sinister... 'cause I know that the average girl will think that there's a chance that she can turn the tables. If I were like, Hey, I just wanna bone, very few people would want to meet up with you."

My advice to women who want traditional courtships is to look for those kinds of courtships in more traditional spaces. Although finding love and life-long partnership might be possible through Tinder, the odds are it isn't. Tinder could be a gift or curse, depending on how one uses it, but an apocalypse it is not.