With the S&P 500 now down about 10% from its all-time high in May 2015, a certain level of fear has returned to the markets. Among the many concerns investors have are the dramatic slowdown in Chinese economic growth, a meltdown in energy and other commodity prices, the questionable state of European bank balance sheets, and the prospect of higher interest rates (and their many side effects) in the US after several years of ultra-loose monetary policy. Given the concerns, we thought it might be instructive to look back at the performance of the various major asset classes to see if we can gain some insight.

Using exchange-traded funds (ETFs) as a proxy, we examined the total returns for nine asset classes (with some overlap) over 1-, 3-, 5- and 10-year horizons. (We excluded the 7-year period because the starting point would have been square in the throes of the financial crisis). The results are displayed in the chart below. It may surprise you to learn that the only asset classes with positive annualized returns for all periods were long-term Treasury bonds and municipal bonds. That's right. Nearly seven years after the end of the "Great Recession," the asset classes considered most defensive of all have still been the most consistent performers. I think this says quite a bit about both the strength (or rather weakness) of the economic recovery, as well as the skepticism with which investors perceive our present economic future. But the alternative is probably a better explanation: the Fed has simply not removed it's foot off the gas to any great extent, and investors still, even today, don't expect the Fed to act with much urgency any time soon. 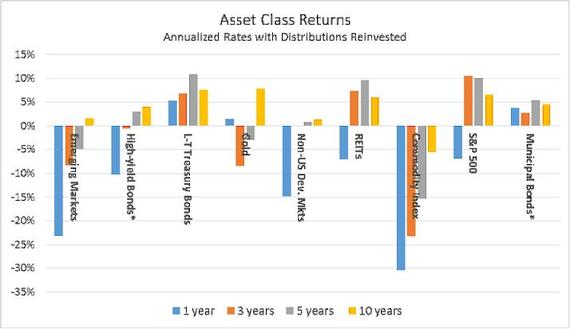 A second observation is that gold produced the highest total return over the past 10 years at 7.8% annually. This is true despite the fact that gold has pulled back dramatically from its 2011 highs, and it earns no income. Gold's trajectory has been an enigma for many an investor for quite a while. The precious metal rallied sharply through mid-2011, and to a certain extent this made sense. The Fed and other central banks were printing trillions of dollars, which, many thought, would eventually result in runaway inflation. More money equals more inflation. But gold's sharp drop since 2012 has been harder to explain. The most likely explanation is that a dramatic slowdown in economic growth (especially in China) has caused commodity prices to tank. At the same time, many foreign countries, both emerging and developed, are depreciating their currencies in an effort to boost economic growth. Sagging global demand, crashing commodity prices, and currency wars are all indicators of disinflationary, if not deflationary, pressures. Deflation is bad for gold because investors buy it as a hedge against inflation. But to make matters even more confusing, so far in 2016 gold has turned sharply upward once again. Can it be that the markets are now expecting the Fed to reverse course once again and return to the printing presses? That seems to be most plausible explanation for gold's sudden rebound. We'll be watching closely to see if gold can hold its gains in the balance of 2016.

A final observation concerns the S&P 500, which we use as a proxy for US publicly-traded companies (albeit the largest ones). It should come as no surprise that the 3- and 5-year returns have been strong for the index. After all, the S&P 500 has increased close to 200% from its March 2009 low. But what may come as a surprise is the fact that the index has produced a total return of nearly 7% annually since 2006, which was prior to the Great Recession and financial crisis. After all the turmoil, anguish, and volatility suffered over the past 10 years, if you had simply tuned out and held onto your portfolio of high-quality US stocks throughout, you would have earned nearly 7% per year - better than all but two of the asset classes we examined (to include both emerging-market stocks and non-US developed market stocks). The lesson? Let your financial advisor do the day-to-day worrying. If you have the time horizon to ride out storms, including massive hurricanes like the financial crisis, you're best served by drowning out the noise and benefiting from the US stock market's unparalleled ability to create wealth over long periods of time.