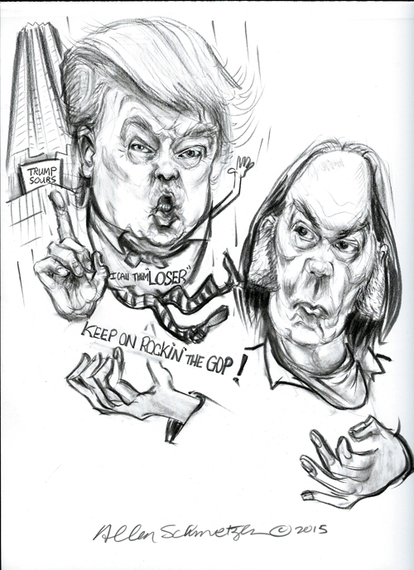 The Huffington Post gets it right again by relegating the Donald Trump candidacy to entertainment rather than serious politics. For now, Mr. Trump, the caricature of Republican politics is doing what he does best, entertainment. We are at the approach to the red carpet in our presidential election cycle, the place where the political class auditions and teases with how they dress, with whom hangs on their arm, and the color of their words. Therefore, for these few weeks prior to the first official debate even the other entertainer Donald, Donald Duck, would likely get a bump in polls, and perhaps more interestingly, probably talk more sense than the billionaire Donald.

Donald Trump is the Frankenstein wrecking ball that the Republican Party deserves. He is mean, vicious, self-serving, uncompromising, bloated, out of date, insensitive, and tells lies and distortions. The Donald's worldview is to "real estate" people and places. He assesses a deal, calculates the kill, and mercilessly erases stuff from the landscape. He never was one to look back and remorse over the financial body bags plowed under by his bully bulldozers.

After multiple business and marriage bankruptcies, an ego-needy Donald Trump wants to go from the Apprentice to the Commander-In-Chief. Except, in his current role as Republican presidential candidate frontrunner, his shrink-wrapped script is running shallow, thin, and too riddled with holes to hold his narrative together for much longer. The surging surreal sideshow is about to morph into the sickening show. Presidential politics plays early on as a reality game show flush with curiosity and celebrity, but inevitably the hungry get into the thrill of the kill when weaknesses are exposed, and The Donald is soon to be set upon much as literature's Frankenstein was hounded, cornered and returned to his previous life.

Whilst this larger process takes it form, some of the subtexts are just as revelatory. Republicans were very soft and slow to push back at Trump over his despicable prejudicial opening arguments on Mexicans. Donald Trump calibrated the moment correctly. He cornered the media "reel-estate" market on the 24-hour news cycle. His was a royal entrance with resonating a true Republican theme. Trump spoke as we expect him to, seemingly unfiltered, honest and true without holding back and without sounding like a real politician in public, but he fumbled the message. Adding more racial angst to a country still processing so much divisiveness, tragedy and falling icons, may have pandered to some folks, but immediately eliminated him from any hope of a national electoral trump. Maybe his real intentions are to just rock the GOP and fashion-up his brand.

Mr. Trump apparently not satisfied that he wounded and insulted so many in his first week "campaigning" rocked another powerful and revered slice of GOP Americana, the military-family complex. Finally, a larger offensive was launched. But why did it take his attacking a surrogate military symbol, John McCain, before most of his competitors and "RepubliCons" countered?

Republicans and much of the military family were thrilled in 2004 when Democrat's presidential candidate and military hero, John Kerry, was falsely trashed and swift-boated. Their indignation over Donald Trump's John McCain comment comes off as self-serving and political Republican contradictions. The crowd is forming to put down Frankenstein, before too many inconsistencies and GOP weaknesses are exposed.

In the meantime, I love the entertainment of Trump as Apprentice auditioning for Presidential nominee and his theme song of "Keep On Rockin' The GOP," before he gets voted off the stage.