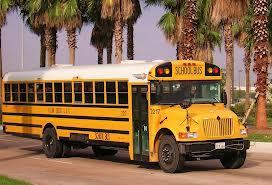 Now that the first back-to-school day is officially passed in some states, I want to talk about something simple, yet understated, and in urgent need of addressing.

One of my pet-peeves when driving anywhere in the United States is to see rental cars passing yellow school buses on the streets.

From Europe myself, I understand where this is coming from - they simply don't know any better!

American drivers have no excuses, and there is usually zero tolerance for infringing this law.

But tourists arriving from Europe (or elsewhere for that matter) many a time do pass stopped school buses with no second thought.

I believe the rental cars companies should be the ones telling the visiting foreign tourists about it.

If they are not aware of the law, how could they possibly apply it? They don't know it's the law to stop when a school bus is stopped by the side, and even if the stop sign is not sticking out of its side.

We cannot expect every citizen of the entire planet to know about American laws and regulations. Do we know about foreign countries laws?

When I first came to California from France and rented a car, I had no idea it was mandatory to do so. After someone told me, I was wondering why the rental company never mentioned it.

They told me how to drive off the airport zone, how to refuel the car, how to use four-way traffic stops, how to go around a roundabout, how to park in San Francisco with your wheels turned against the curb to avoid the car from rolling down the many hills.

They did give me a map and a few tips about the car. They never said anything about the yellow buses and the law.

And since this is valid for all of the States, I think it's time the rental car companies train their employees to warn their customers, and make sure they understand the vital importance of observing that simple rule.

It should even be printed on the brochures and on the maps given to the tourists.

More:
lawamericaChildrenEuropesafety
Newsletter Sign Up
An essential daily guide to achieving the good life
Subscribe to our lifestyle email.
Successfully Subscribed!
Realness delivered to your inbox