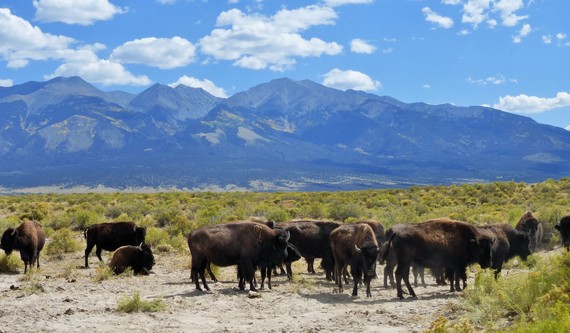 The San Luis Valley of southern Colorado is the largest alpine valley in the world. Covering an area the size of Massachusetts, this flat, sandy valley floor receives less rainfall than the Sahara. There are only 40,000 humans living here, making it one of the most isolated, quietest and darkest places on the planet. And you know what happens when things get quiet and dark. They also get strange. 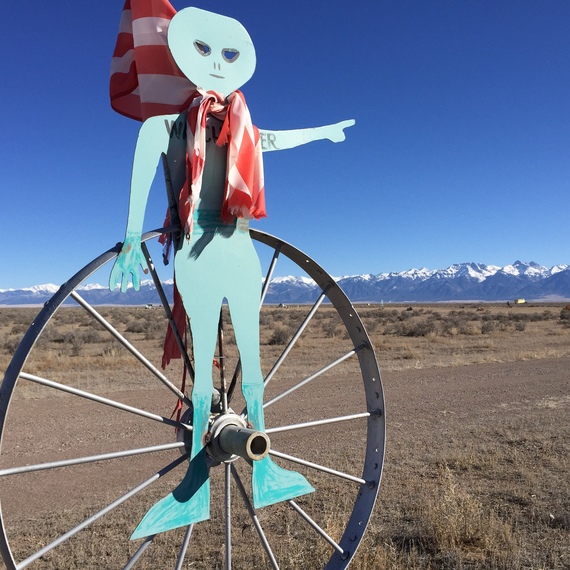 San Luis has attracted more UFO sightings than nearby Roswell, NM. It's well known for unexplained cattle mutilations. Many believe the little San Luis Valley town of Crestone sits on a deposit of quartz crystals, making it a vortex to other dimensions. There are 30 religious shrines in Crestone, more per capita than any place on earth. And then there are the alligators, the sand dunes, and of course, don't forget legalized marijuana. All of which make the San Luis Valley a little looney. And the people here like it that way.

Here's a quick tour to some of the quirky must-see stops in San Luis. 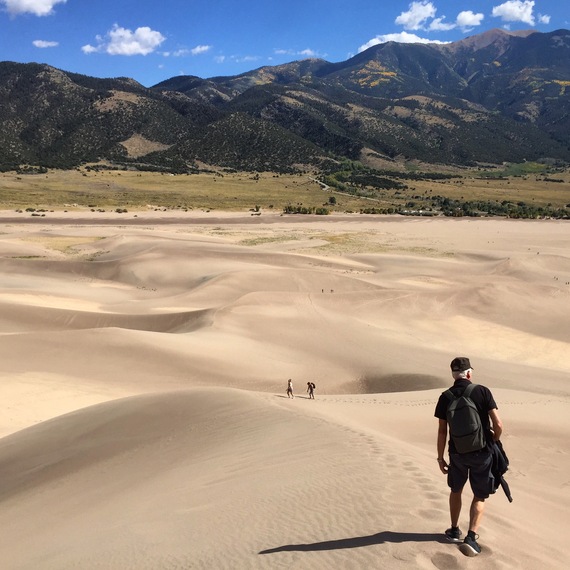 On the eastern side of the valley, at the base of the Sangre de Cristo Mountain Range, are 50- square-miles of soft, curving, and dramatic wind-sculptured sand dunes. They are the highest inland sand dunes in North America, rising to more than 750 feet. Pink, cream, brown, tan or gold - depending on the angle of the sun - they are shifting mountains of sand.

Each day, the winds go to work on them. A strong wind can set the whole 50-square-mile dune surface moving, creating ripples, building the sand into elegantly shaped crescents or adding onto the loose masses called climbing dunes. But sooner or later, reverse winds blow down from the mountains and the dunes are returned to near their original shape. Scientists think they've been here 440,000 years. Maybe. No one really knows for sure. But photos taken in 1927 show that the main dunes have undergone very little change in the past 80 years. 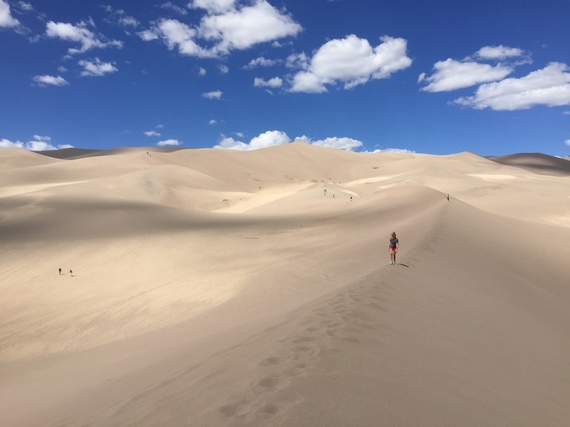 There are many activities in the park, but everyone's first choice is hiking the dunes. There are no trails here - they wouldn't last an afternoon - so visitors can go anywhere they want. But first, to get to the dunes you have to cross shallow Medano Creek, which flows between the dunes and the Visitor Center. It's best to just take off your shoes and wade across the soft, water-cooled sand creek, but be sure to wear shoes into the dunes. In mid-summer, the sand can reach 140 degrees F.

Due to shadows, the dunes appear deceptively steep. The pure physics of the sand says that it can't be piled at an angle steeper than 34 degrees. Seventy percent of the grains of sand are .2 to .3 millimeters in diameter - the width of a human hair. Stacked any steeper than 34 degrees, and they simply give way to gravity and cascade down. But because of shadows, you'll swear differently - especially as every step you take up, you slide back down halfway. Not to mention, the dunes are at 7,500 feet above sea level. 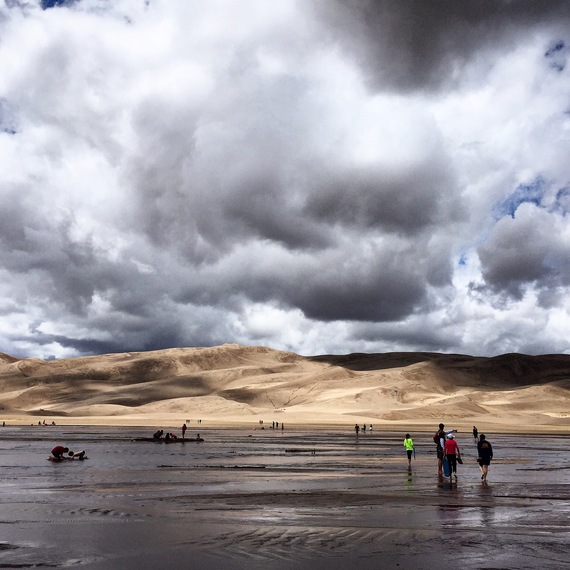 For decades, people have been trying to slide down the dunes on snow skies, on homemade cardboard sleds and aboard flying saucers made for snow. Unfortunately, they don't work. But there are specially designed sand boards and sand sleds that do work and are available outside the park at the Oasis store. The dunes can be dangerous. Blowing sand can be fatal to cameras, and can sting exposed skin and eyes. And of course, it's a terrible place to be in a lightning storm, so observe caution.

The highest dune in North America, Star Dune, is located opposite the Visitors Center and takes about six hours to hike to and return. Most people can easily make it to the top of the first ridge and back in two hours, and that's more than enough view to give you a good taste.

The dunes - or at least the darkness, lack of light pollution and the quiet they bring to the area - may have also attracted UFOs. Local resident Judy Messoline thought so. She built the world's only UFO Watchtower in the town of Hooper, near the park's entrance.

It's really just a metal deck surrounded by strange UFO art. There's a "campground," or at least a place to park overnight, for a fee. There are lots of signs featuring ET. 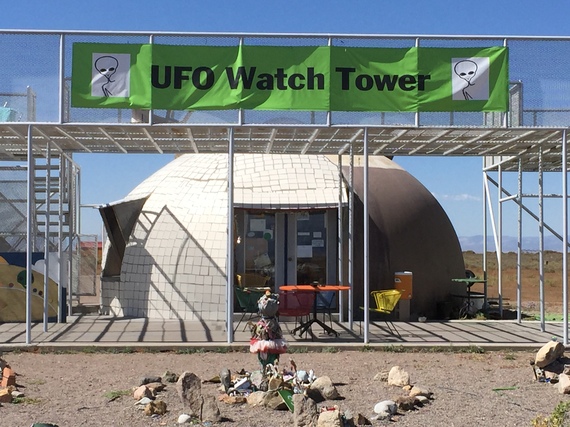 A small museum details the history of the strange number of astral sightings and cattle mutilations that have taken place in the San Luis Valley, some dating back to the 1700s. In theory, the tower is as good a place to park and look for UFOs as any. Judy claims that 88 UFOs have been sighted from the tower since it went up in 2000. Of course, her autobiography is titled, The Crazy Lady Down the Road.

COLORADO GATORS REPTILE PARK
Literally just down the road in the town of Hooper are the biggest alligators in the West, along with a collection of rattlesnakes, pythons, snapping turtles, and, oh, about 350,000 Tilapia fish. Welcome to the Colorado Gators Reptile Park, one of the state's craziest and most fun roadside attractions. It started in 1974 when Erwin and Lynne Young decided to use the valley's geothermal waters (the water stays at a constant 87 degrees) to farm Tilapia, a tasty perch fish that needs warm waters. Fish in fish farms die pretty regularly, and to deal with all the dead fish, they imported 100 baby alligators in 1987. 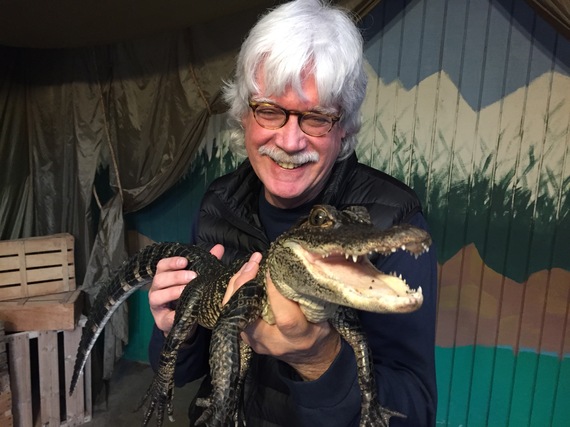 Flash forward, and today, the farm makes more money showing off the exotic animals than from selling fish. Many people have donated alligator pets that became too large, and the park has become a sanctuary for reptiles, including Mr. Bo Mangles, an albino alligator, and Morris, a Hollywood gator that appeared in dozens of films including Happy Gilmore. There are crocodiles, three types of rattlesnakes, tortoises to pet, and you can hold a two-foot-long baby alligator (then have the gator bite and leave bite holes on your "certificate of bravery." 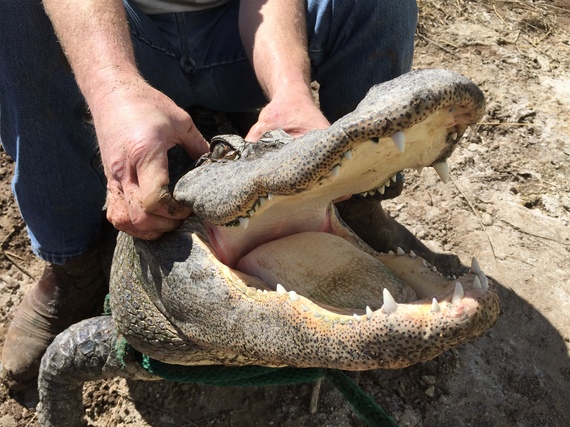 Where most places have signs proclaiming how many months they have gone without an accident, at the Colorado Gators, their safety record sign is measured in hours. Maintaining dozens and dozens of gators in no easy task, and these gators are not pets. Ask the staff to show you bite marks. You'll see the staff feeding them, petting them (the gators snap back), holding open their jaws for demonstrations - and at special events, wrestling them. This is one of the few places in the world where you can take alligator wrestling class. 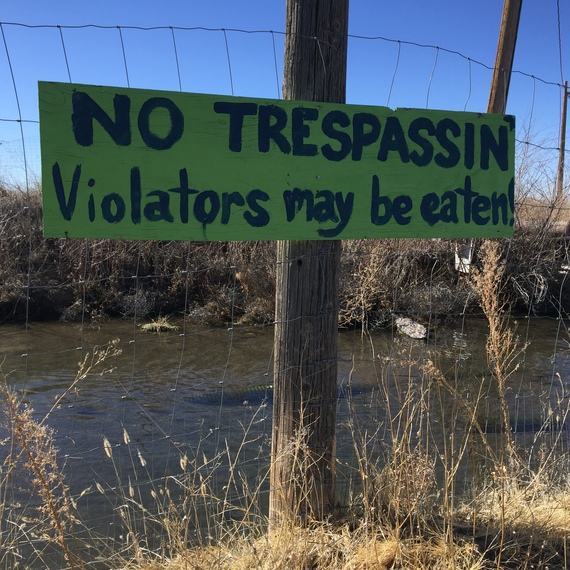 Two dollars buys you a bucket of gator chow, or bring a fishing rod and you can catch and release Tilapia and catfish (or buy them for $3 a pound). If you catch a carp, you get to feed it to a gator.

WELCOME TO THE X-FILES
About 30 minutes up the road is Crestone, a small town of 150 people at the base of the Sangre de Cristo mountains that is very much like walking into an episode of the X-Files. Crestone has more ashrams, stupas, Catholic retreats and spiritual centers per capita than any place in the world. There are 30 of them here, scattered in the mountains with spectacular views. Many locals believe that Crestone holds an energy vortex and is perhaps a portal to other dimensions. At any rate, something strange is going on here, as witnessed by the steady stream of pilgrims and religious retreats held in the town.

You can learn about this, and the artists who live in the area, at the Crestone Historical Museum and Welcome Center. Coming in May 2016 is Crestone Brewing Company, a restaurant and brewery that will make it well worth driving 12 miles off the main highway to see this little artist community and its colorful ashrams.

This is just the start. The San Luis Valley is also home to a fort once commanded by Kit Carson, spectacular hiking trails, waterfalls, the hometown of prizefighter Jack Demsey, and the Cumbres and Toltec Scenic Railroad, the highest and longest steam train in North America. 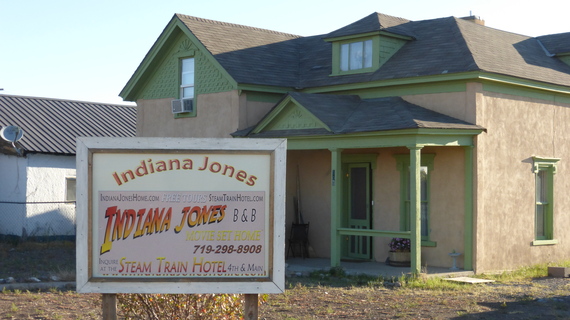 According to movies, Indiana Jones grew up alongside this railroad, and you stay in the B&B that now occupies the house used as Indy's boyhood home in the movies. Accommodations are most plentiful in Alamosa and Monte Vista, but there are beautiful ranch accommodations across the valley as well.