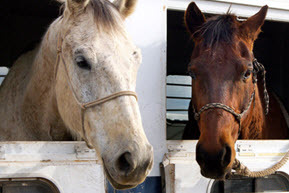 Two recent headlines have brought new attention to the horrific practice of slaughtering horses for human consumption and make clear the imperative behind ending horse slaughter decisively and permanently in the United States.

The first is last month's report from the U.S. Department of the Interior's Office of Inspector General (OIG), which details a deplorable pattern of cruelty: Between 2008 and 2012, Tom Davis, a man with connections to the horse slaughter industry, bought 1,795 wild horses under false pretenses from the Bureau of Land Management (BLM) and illegally sold them to slaughter.

Then on October 27, news broke that Phedras de Blondel, a prized show-jumping horse brought from Europe to a Florida farm, was stolen from his stall and ruthlessly butchered. Based on the condition of the horse's body, authorities suspect the intent was to sell Phedras' meat.

While the idea of consuming horse meat is unethical to most Americans (fully 80% of American voters oppose horse slaughter for human consumption), approximately 150,000 American horses are shipped to Canada and Mexico each year to be slaughtered for this sole purpose.

These unlucky horses, bought at regular horse auctions by "kill buyers" (individuals who fulfill contracts with foreign slaughterhouses) represent all equine breeds and come from show circuits, racetracks, family farms, and - as the OIG report indicates - even purchases arranged by the BLM, which explicitly prohibits the sale or sending of federally-protected wild horses for slaughter.

Horse slaughter for human consumption is, for the moment, effectively prohibited on U.S. soil. But this prohibition has to be renewed annually in the federal appropriations bill. And even that action cannot prevent the export of American horses for slaughter in other countries. To fully protect American horses, we must also stop their one-way ticket to slaughter.

Some will tell you these horses are not well in the first place, but that's just not true. When horse slaughter plants legally operated in the U.S., USDA inspectors found that more than 92% of the horses they killed were healthy and of good body weight - which is valued by kill buyers who make money by the pound. Phedras, who weighed more than 1,500 pounds, appeared to be targeted because of his size.

The horror of horse slaughter is compounded by the torture inherently involved. Horses' physical makeup - combined with their intense flight instincts - make them extremely difficult to stun, and many endure multiple blows to the head before being rendered unconscious. Horses transported to slaughter are also crammed into trailers and may go several days without sufficient food, water, or rest. Inevitable fights among these horses leave many dead or severely maimed.

The truth is, no American horse is currently safe from horse slaughter. But unlike many challenges to animal welfare, this one has a solution that can provide sweeping and permanent protection for these animals. It's the Safeguard American Food Exports (SAFE) Act, H.R. 1942/S. 1214 - common sense legislation that would permanently ban the slaughter of horses for human consumption in the U.S., as well as prohibit the export of horses to other countries for slaughter.

Tell your representatives that the slaughter of animals like Phedras has to end, and criminals like Tom Davis have to be stopped once and for all. It's not just the fate of American horses at stake, but our own moral integrity.