Whether or not you believe in global warming, you've got to admit it's been an exceptionally hot summer, especially in the Northeast. Excessive heat can be very dangerous, even deadly. Indeed, heat is by far the number one cause of weather-related deaths in the U.S. According to the Centers for Disease Control (CDC), infants and children up to four years of age (as well as people over 65 and the chronically ill) are at the greatest risk for heat-related illness.

Babies' temperature-regulating systems aren't fully developed; they have fewer sweat glands than adults, so they sweat less. As a result, they're not as efficient as adults in keeping cool and are very susceptible to hyperthermia -- an abnormally high body temperature -- which can be life-threatening.

If a baby's temperature is not brought back to normal, hyperthermia may progress to heat exhaustion, a more serious condition in which the baby's temperature can climb to 103 degrees, which requires immediate medical attention. If untreated, heat exhaustion can progress to heat stroke. This is a much more serious condition in which the body temperature rises above 103 degrees. The result: convulsions, coma and often death. Since 1998, almost 500 babies and young children have died from hyperthermia in the U.S. Tragically, most cases were entirely preventable.

Because many babies can't tell their parents or caregivers that they're thirsty, they can become dangerously dehydrated in hot weather, which also can lead to hyperthermia. So, it's extremely important to be alert to the following warning signs of dehydration in babies:

If you think your baby is dehydrated, The American Academy of Pediatrics recommends that you try to get him or her to drink an electrolyte replacement solution (such as Pedialyte) or water, and call your doctor immediately. Because dehydration causes babies' core temperature to rise rapidly, it puts them at increased risk for heat exhaustion and heat stroke.

The best way to keep babies safe in the summer heat is to prevent them from becoming overheated and dehydrated in the first place.

1. Make sure your baby drinks extra fluids, especially water, in warm weather. Breastfed babies also need additional liquids either from the breast or bottle, whatever the mother prefers. And if you're nursing, you should increase your fluid intake as well so you don't become dehydrated. 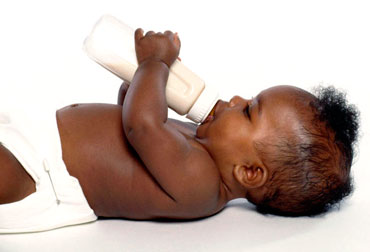 2. Keep your baby indoors in an air-conditioned room during heat waves. According to the CDC, the number one protection against heat-related illness and death is air conditioning. If your home isn't air conditioned, find some place that is, such as a shopping mall, public library or a heat-relief shelter. Fans can help a bit, but when the temperature soars into the 90s, fans cannot prevent heat exhaustion and stroke. 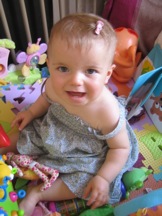 3. If your baby must go outdoors, dress him or her in light-weight, light-colored clothes. A hat, sunglasses and sunscreen (if the baby is over 6 months of age) are a must. They also help protect a baby from dangerous sun rays. Babies are very susceptible to sunburn and when children become sunburned, their sweat glands don't function as well. And sunburns in babies put them at increased risk for skin cancer, even in childhood. 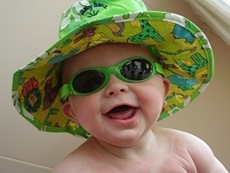 4. Never leave a baby or child unattended in a parked car, even for one minute. Most babies and young children who die from hyperthermia had been left alone in cars. Even with the windows cracked open, cars can rapidly heat up to dangerous levels in 10 minutes, even in moderate temperatures. Metal seat buckles can also become dangerously hot in a parked car and burn a baby's sensitive skin. 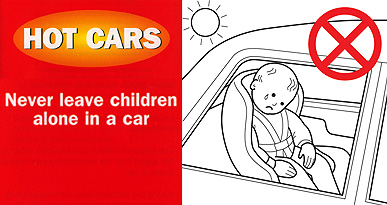 Most of these heat-related safety tips can also be applied to older children, the elderly, people with serious medical problems and even pets, all of whom are highly susceptible to the ill effects of high temperatures. And they're often dependent on others to make sensible decisions to protect them. Summertime should be a happy time. It's up to you to keep your baby cool, well hydrated and safe from the heat and scorching sun.

Authors of "Baby Body Signs" and "Body Signs: How to be Your Own Diagnostic Detective"