Everyone's got their special trick for keeping an avocado from turning brown. Some people keep the pit intact. Others rub it with lemon juice. Some cover the avocado halves with plastic wrap. Chefs immerse them in cold water. But do any of these methods actually work? We had to know -- once and for all.

So naturally, we did what any grown adult would do: we conducted a good, old-fashioned science experiment in the proper grade-school manner to get to the bottom of browning avocados. We wrote up our hypothesis. We made up charts and graphs. (We even considered putting together a foam board presentation.) And we set out to get to the bottom of this major life problem.

Here's the how and why:
Avocados contain an enzyme called polyphenol oxidase, which when in contact with oxygen in the air, causes avocados to turn brown. The best way then, to keep an avocado from turning brown, is to reduce its contact with air as much as possible. But which trick does that best?

A look at the popular methods for keeping avocados from browning:
The Pit Method: Many food people claim that leaving the pit in an avocado will keep it from turning brown. Science would dictate that this is only partially true. Yes, if the pit was not detached, the flesh that stays in contact with the pit will not turn brown because it's not in contact with oxygen. But, logic says that every other part of the avocado will brown. We will find out.

The Citrus Method: Acid is said to slow down the process of browning. Some people rub the cut side of an avocado with lemon juice. Alton Brown recommends tossing with 1/2 teaspoon lemon juice for each diced avocado. But does it really work?

The Water Method: Chefs and cooks store their cut avocados for up to four hours in a water bath as they need to prepare avocados in advance for restaurant service. The cold water keeps the avocado away from oxygen, so it should work. But does it make sense for the home cook?

Now, the experiment.
We took four avocado halves, using the three popular methods mentioned above -- plus one for control -- and waited for them to brown. Here they are ready to embark on their browning journey. 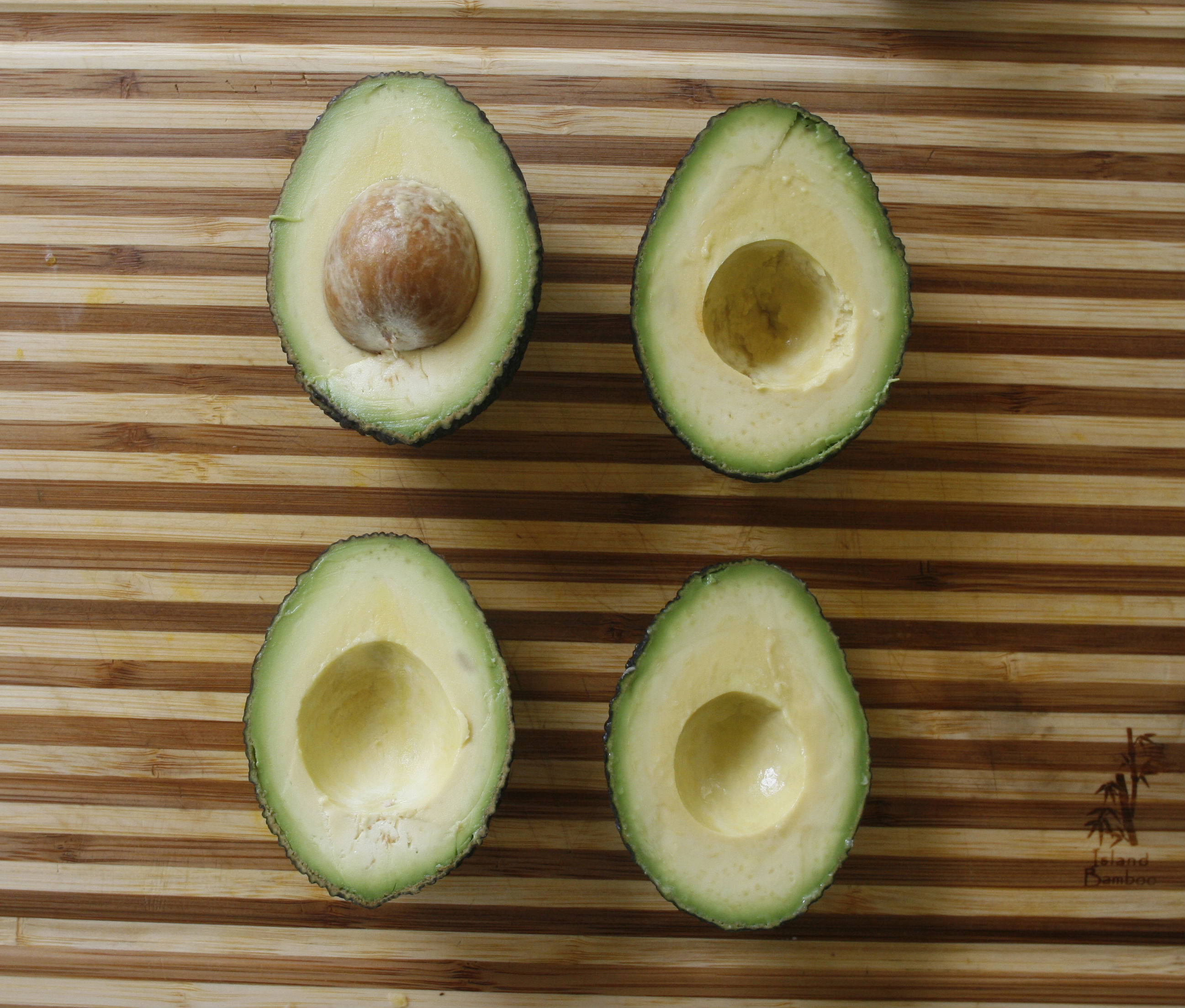 We kept the pit in one, brushed another with lemon juice, placed the third one in a plastic container full of cold water, and left one out as a control to check the progress (or decay) of the other three avocados. We checked on them periodically, but waited a full 24 hours to report our results. Below are those same avocados pictured above the morning after (in a different order). 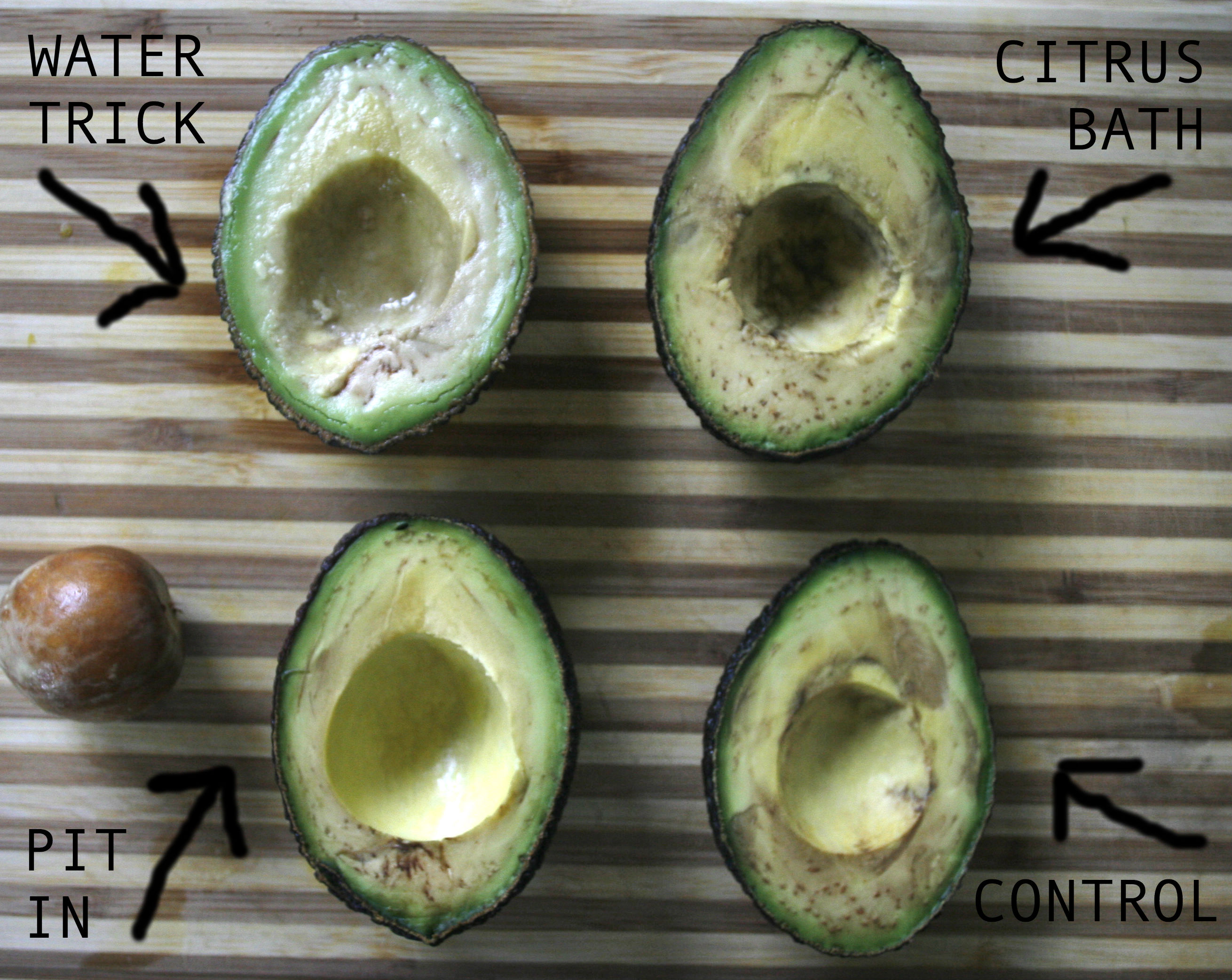 Isn't that a sad, sad sight? We started with four beautiful avocado halves and ended up with an ugly mess.

Our Conclusion:
NOTHING WORKS. Also, none of the avocados really browned that much. While you're better off eating the avocados as soon as you open it, you can still eat them the next day without too much discoloration. So don't even bother with any of the methods above, because they're a waste of everyone's time.

Here's the run down: the water method failed the worst because it soaked for way too long, but how many of us at home only need to store an avocado for only four hours? The citrus method did nothing -- absolutely nothing. And, actually, the pit method worked best because at least there was a portion of avocado that did not brown.

But the real important lesson we learned is that we would still eat all of them, brown or not. And if you don't feel the same way, maybe you don't love avocado enough to deserve to eat it the next day. Basically, all this talk of brown avocados is for naught. Go on and keep doing what you're doing with your green fruit -- it's all good.