A friend recently alerted me to a short interview with Miss Georgia, Betty Cantrell, who went on to win the 2015 Miss America title. She sang a 90-second version an aria from Madama Butterfly, and as far as these nationally televised 90-second operatic performances go, it was actually quite compelling. However, while certainly charming and lovely, Miss Georgia stumbled a bit when attempting to describe in this interview why presenting opera is important; "It's old music... it's traditional. And I really want to bring that back and keep it alive."

Now please don't misunderstand me. I'm not trying to attack Miss Georgia for not being scholarly enough in her assessment of opera. She seemed very genuine and articulate in her interview, and I'm thrilled to have more people exposed to opera through a nationally televised performance. But this ongoing stereotype that opera is "old" confounds many of us who make our living in this field -- especially the men and women who are actually alive at this very moment, composing new operas. Somehow nobody ever refers to visual art as an "old" art form, although it has an even longer history than opera, and the "common man" on the street seems to at least know that Jackson Pollock and Andy Warhol exist. But the frequent misconception that opera is only ancient definitely exists, because on more than one occasion I've had a stranger who struck up a conversation with me comment," wait -- you're singing a NEW opera? They still write operas?"

Thank god, yes, THEY still write operas. In fact, some of them even write operas and songs just for me. I had an almost religious experience recently when I was working on learning Mark Adamo's new opera, Becoming Santa Claus, which I will perform with Dallas Opera in December. The role of Queen Sophine is one that Mark has actually composed with my voice in mind from the very beginning, which I probably don't need to explain to you (if you've gotten past the Miss America section of this article and haven't written me off as a hopeless culture snob and possibly a socialist) is unbelievably cool. I have previously performed in two Adamo operas; Little Women, in which I sang two different roles in four different productions, and Lysistrata. I know Adamo's compositional voice pretty deeply by now, and know what it feels like to sing his music, in the same way I know how Mozart and Rossini feel in my throat. But in this case, a living Mozart-ossini actually thought about my voice and the way it moves and when it soars and wrote a piece of music that I then get to bring to life with that very voice. As I was learning the notes, the familiar sensations of his writing style moved across my throat and demonstrated to my brain that he knows just how my voice wants to express itself. I felt myself getting deeply emotional as I discovered the writing suited me so well, and realized what a unique and special opportunity this was. I had a similar feeling of thrill, awe, and humility when I had the opportunity to sing through an aria in a new work by Ricky Ian Gordon for a reading of his Metropolitan Opera commissioned work Intimate Apparel. We were alone in his apartment and after I sang through the aria and some of the role, I asked him; "have you heard anyone sing any of this opera before?" When he answered "no -- you're the first," I definitely got chills and a bit teary. It really fills me with wonder to get to be so closely involved in bringing the music to life for these human beings whose ability to create something new in a musical language is the very thing that keeps our art form alive.

A few years ago I was approached by the producer and composer Glen Roven about a solo CD project for his record label GPR Records (Now RovenRecords), distributed by Naxos. I would love to record Schumann's Frauenliebe und Leben or some baroque cantatas, but my commitment to living composers outshone those interests, and I proposed some ideas, which he happily accepted. First I asked Garrison Keillor (I had appeared on "A Prairie Home Companion" on several occasions as a musical guest after meeting Mr. Keillor at a WNYC gala on which we were both performing) to provide me with some poems and lyrics that might make great songs. He complied, and I asked Robert Aldridge, the composer of the opera Elmer Gantry, in which I had the pleasure of singing the world premiere, to set the chosen texts. Bob worked quite quickly, and when sitting at his computer listening to the midi files for the first time, I cried (are you sensing a pattern here?). He had set these lyrics, that went from hilarious to poignant, created by a truly iconic American voice, to music that echoed their sentiments to perfection. And he did this for. my. voice. Come on -- who wouldn't cry? I asked another wonderful composer, Herschel Garfein, to complete a song cycle of Blake poetry which he had had begun with my voice in mind, discovered an enchanting song cycle written by Jorge Martin entitled A Cuban in Vermont, and finished the recording off with two songs written by my producer Glen Roven, also an Emmy winning composer, on poems of another iconic American poet; Edna St Vincent Millay. During the course of coming up with the ideas, creating the songs, and recording them I got married (Herschel Garfein was the officiant), had a child (I recorded one of the sets while eight months pregnant), and became the Director for Artistic Development at the Center for Contemporary Opera -- a dream job that allows me full access to composers and their works and the incredibly important responsibility of bringing their works to life from every angle. The CD, by the way, Innocence / Experience drops on October 30th (I've always wanted to say that), is currently available for pre-order on Amazon and iTunes, and I will perform a recital of the entire program on October 29th at Bargemusic in Brooklyn to celebrate the launch.

Creating new works is what allows any art form to continue to develop and grow. Without Monteverdi we wouldn't have had the Mozart that we did, and we can follow that path with our most beloved opera composers all the way to now -- we wouldn't have the Jake Heggie we have now if we hadn't had Puccini or Verdi or Stravinsky. So being able to work with and support the works of living composers allows our art form to find the true masterpieces of every era. The compositions of now can speak to us in a lot of different musical idioms from atonal to fully lyrical, they tell stories from history and stories from today. And if you run into someone that has never been to an opera, why not encourage them to try a contemporary opera for their first experience? You can tell them: It's like watching a movie and going to a play, except instead of just a soundtrack, the whole experience IS the soundtrack. Plus there are STILL no microphones. It's where art, culture and entertainment meet. This ain't your grandpa's opera -- but you can bring him as your date, and he'll probably like it too. 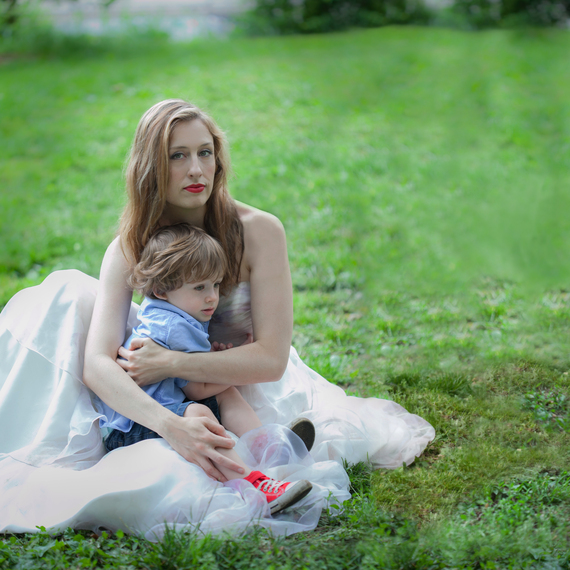