I received an email tonight from a fellow mom. Really, it was more of a detailed confession of all of the things she'd done wrong today as a mother. It ended with two simple words: "parent fail." Her email both broke my heart and made me incredibly angry, because she really is a terrific mom. But today, she must have used someone else's measuring stick to make that call. It troubled me in particular because it seems to me that motherhood and parenthood cannot be measured or won or lost on a battle-by-battle or day-to-day basis. Truly, we're in this for the long haul. Did your child watch six hours of TV today or eat pizza for dinner every night this week? What really matters at the end of the day?

Let's just admit my own bias here. If we are measuring this stuff on a day-to-day basis, I'm assuming I would have done a pretty shitty job by most people's standards. I brought my son to the grocery store in a rainbow-colored clown wig and pajamas because it was the only way I could get him to the store. We've probably watched at least six hours of Disney over the past two days and my daughter can do a spot-on impersonation of Candace from Phineas and Ferb that is unsettling, given her tender age. Also, Ruby would only eat an all-yellow dinner tonight (corn, mac and cheese and pineapple), though I guess I should view this as an improvement over last night's dinner, the stale hot dog bun. We are nearly halfway through the week and have done no clever do-it-yourself projects that have taught them anything. We did try to trace our hands with chalk in the driveway, though that really didn't teach us much of anything other than the fact that we have fat hands. Glamorous, right?

Parenthood isn't about perfection. How could it be? At its core, it is the business of imperfect humans raising other imperfect little humans to the best of their ability and loving them with everything they've got. There is no real yard stick for that. Facebook and the proliferation of Instagram would have you believe that everyone else's children are living some glossy pictorial straight out of Parents magazine, where perfectly-coiffed children frolic in the ocean as the sun lilts behind them and they smile coyly from beneath a well-placed sun hat (that the perfect child does not remove). It is not real. It's all spin -- it's what they are putting out there for us to see.

We are who we are and I hope if I teach my kids anything, it is the fact that we are real and flawed and it's OK to be real and to love yourself because of all those flaws, not in spite of them. You see, that's the real secret teachable moment of parenthood: teaching our children to love themselves just because of who they are, and to not waste any time on this precious earth chasing some perfect idealized version of themselves or their mommy.

Think back on your own childhood. Do you remember a perfectly sucky day when you were 3 years old? Probably about as a much as you remember a pretty great one from when you were 3, which is not very much at all. I think a lot about and write about my own childhood and particularly my mother. She was with me until right after I had my first child, and then she was gone. And so I don't have the opportunity to ask, Was I like that? Did I do that? Did you get frustrated? Did you let me wear my pajamas to the grocery store? I just can't remember.

What I do remember was that she could curse like a truck driver sometimes, that she fed me some frozen turkey covered in a purple sauce that was definitely not for human consumption, that she ate a bowl of chips in front of the TV in her bathrobe almost every night, and that she let me watch Dallas when I was in Kindergarten. Let's face it: Dallas was no Nick, Jr. She wasn't perfect and I loved that about her. She was real and in my memories she makes it OK for me to be that real with my own children. Because I think about how much I loved her and our time together and realize it's not about any of those things. It's about who she was, not what she did on any one day. She was a lifetime of love and compassion and good humor and kindness She was in it for the long haul. As parents, we all are. So, stop judging and love yourself. Because today was just today. And really by most standards including mine, really not a very bad one at all. You're a good hard-working mommy teaching your baby about love and compassion. It's a lifetime of work and cannot be won or lost in one day. So, soldier on and keep it real, mommas. 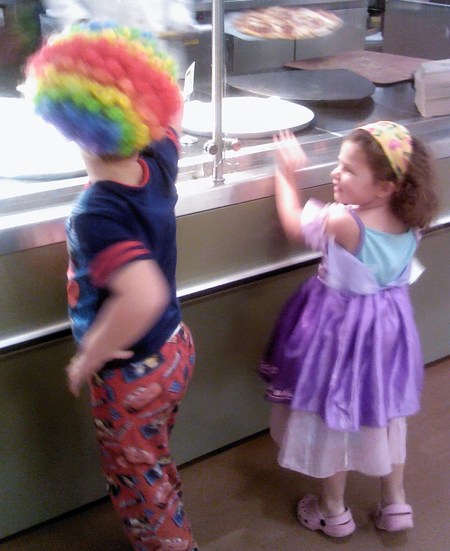 More:
InstagramMomsMotherhoodParenting Parents
Newsletter Sign Up
Raise the kind of person you'd like to know
Subscribe to our parenting newsletter.
Successfully Subscribed!
Realness delivered to your inbox

Mother and writer at http://my-jenneration.blogspot.com/