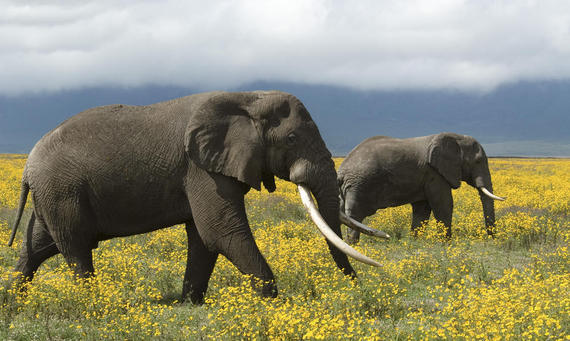 Forbes Danckwerts, a leader in the Zimbabwe Elephant Nursery (ZEN) and an elephant advocate, is working on strategies to help save the lives of elephants by targeting the ivory markets. Forbes reminds us that at this rate, elephants will be extinct within nine years unless we actively combat the underlying market for poaching. I know Forbes through Watson University, a partner of the GlobalMindED conference that is held annually in Denver and will take place this year from June 21-23.

What are some ways that you are developing the poaching-dense areas?

The numbers speak for themselves. In just the last three years, more than 100,000 elephants have been slaughtered across the African continent. It is estimated that an elephant is killed every 15 minutes, and at the current rate, with a total population of just 400,000 individuals left, elephants could be extinct within nine years. It is a scary thought, because if you consider those who are in third grade today, when they graduate high-school, elephants may be gone from this Earth forever.

In the Sebungwe region of Zimbabwe, more than 75% of the population has been wiped out in just the last 10 years. Sebungwe is home to one of Zimbabwe's most prestigious national parks, Matusadona. Recently, I had the opportunity to meet with Henry McIlwaine who leads the Matusadona anti-poaching project (MAPP). Through various discussions it became clear, that and in a country like Zimbabwe, it is going to be increasingly difficult to secure a future for Southern Africa's elephant populations.

I am currently working with Black Mamba anti-poaching operation in the hope of developing innovative technology that identifies where the major ivory-trading routes are in Southern Africa and who the major stakeholders are in the industry. This is a unique approach, because it is offensive by nature. I believe that if we are able to intricately understand the ivory trade, we will be able to disrupt elephant poaching in Southern Africa and potentially secure a future for these remarkable beings.

What were your initial steps in implementing your plan?

My mother founded the Zimbabwe Elephant Nursery (ZEN) in 2013 as a response to increased poaching activities around Zimbabwe. The nursery is a specialized care center for orphaned elephant calves and is currently in the process of rehabilitating five young elephants. Once deemed ready, the elephants will be released back into the wild. It is through my experience working with my mother on this project that I have been inspired to look for innovative ways to tackle elephant poaching.

I am currently working for ZEN as Fundraising and Public Relations director, and I founded Our Roots Trust in 2016 in order to develop innovative technological solutions to major challenges facing conservation. Currently we are working on a device that would allow us to track elephant tusks as they move through the market. We hope to identify major stakeholders in the industry and get insight into ivory-trading hubs through Southern Africa.

Have you found that communities around the world are supporting your work? If so, in what ways are they involving themselves?

In general people are fascinated by the work I do. I think that we as human beings have a special connection to elephants. Unfortunately, the situation on the ground is deeply misunderstood, making it very difficult to receive support from international communities.

To date, ZEN has had tremendous difficulty securing funding. ZEN is focused on the welfare of the individual animal and believes that every individual has a role to play in the bigger picture. Our philosophy is based on an ancient African proverb, "little by little, a little becomes a lot...". We are actively seeking international support.

What has been your most memorable experience in your work?

In January 2015, my brother and I tracked an elephant. After nearly two full days under the scorching African sun, we finally caught up to the animal. We were met with one of the most brutal sights we had ever seen. An elephant bull, nearly 50 years old, slaughtered. Its face sawn off by a chainsaw, its tusks removed, and we counted over 20 bullet holes inside of the bloody carcass.

Over the course of your lifetime, how would you like to make the biggest difference with your unique gifts and talents?

I would like my children, and their children, to be able to experience elephants in the wild. In my heart of hearts, I believe a large-scale collaborative effort from various entities and individuals will be important in ensuring that elephants have a chance.

I have grown up in Zimbabwe, and now I have an opportunity to study in Boulder, Colorado. Because of this, I am in a unique position to act as a voice for elephants and spread the message far and wide that elephants are at risk of extinction. I am committed to playing my part in ensuring a future for elephant populations and will continue to work at ZEN, as well as seeking out innovative technology to disrupt elephant poaching.

Forbes' work is necessary and urgent, but sometimes gets overlooked and underappreciated. Elephants are some of the most intelligent, interesting animals on the planet, and deserve our compassion, respect and protection. Seeing what Forbes is doing can make us ask, what are we doing to help those who are defenseless?

Forbes is an example of the amazing young talent studying at Watson University in Boulder, CO. You can meet Watson and their student entrepreneurs at GlobalMindED June 21-23, 2017.