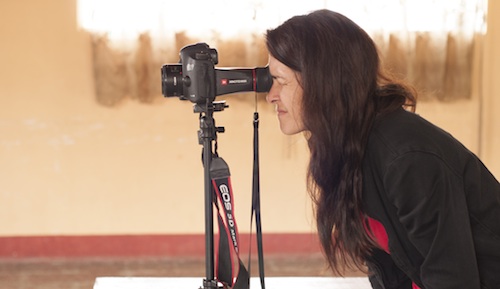 "Why do you always make bad films about Africa?"

As a Western documentary filmmaker who has traveled over 25 times to the African continent, I have been asked this question a lot, mostly by my African friends. And while I try to justify my work by elaborating on my "pure" intentions and my heartfelt efforts to retain the dignity of the people I film in my story, the reality is, making films about women and girls in Africa, as a non-African, usually means focusing my camera on the suffering, the struggles and the challenges facing African people.

Hollywood films are no better. According to Cracked.com, one of the "6 Insane Stereotypes That Movies Can't Seem to Get Over" is that "Everyone in Africa Is Uncivilized or a Warlord." Blood Diamond, Hotel Rwanda, Black Hawk Down are all examples of films where cinematically Africa is portrayed as beautiful but corrupt and poor and disease-ridden in every other way.

So, the question for filmmakers like myself who want to make socially-conscious films that advance positive social change and, bring to light issues in the developing world is this - how do we illustrate development problems without dumbing down our storylines?

Since speaking at the 2010 inaugural Social Good Summit, on a panel entitled "The Power of Film", I have struggled with the question of who is entitled to tell someone else's story. Are Westerners reinforcing power imbalances by perpetuating stereotypes of the developing world? Are we really contributing to solving global poverty by coming in with expensive film equipment, deciding which stories are the most important, getting our disadvantaged brothers and sisters to tell their stories with no financial payback? Should we instead be giving those film opportunities to local filmmakers? Should we as Western filmmakers have an obligation to give back in some way? To train or leave equipment? Or are we justified because we are making films for a Western audience so it makes sense that we produce the films.

I once heard someone say that art is a reflection of your soul, so if you are creating art about another culture, make sure your soul is right.

This can mean different things to different people. For me, it's constantly checking myself, being aware of my "white" (or rather, quarter Chinese/Mongolian) privilege, and learning and exploring alternative theories on the roots of poverty. And most importantly, listening to intellectuals, artists, activists and friends representing cultures that I'm making films about.

I'm happy to say that after years of feeling uncomfortable, and questioning my career choice, I finally worked on a film that I think is going to change the way I do my films in the future.

After curating the Cinema Corner at Women Deliver in Malaysia this past May and being exposed to all different sorts of genres of films (narrative, PSAs, music videos, as well as documentaries) that illustrate issues affecting women and girls, I decided to do my next film by mixing genres.

¡PODER! is a new film I just completed shooting in Concepción Chiquirichapa, a small town in Guatemala. It's a film that showcases the power of girls by highlighting the work of two indigenous girls who challenged their town mayor to support girls' needs. Initially skeptical of why girls of their age would be interested in politics, the mayor eventually listened to them, worked to understand them, and then co-wrote and funded legislation that resulted in more community programs for adolescents. With these girls by his side, he eventually opened up a new Office for Women and Adolescents in their municipality. Talk about girl power!

Instead of shooting this film like a documentary, I decided to make it a short narrative film based on the real-life story of these two young girls. My process involved interviewing the girls before I arrived in Guatemala and again, when I met them in person. Based on their interviews, I wrote a script and then had them act-out their own story. We moved through the town, filmming the different scenes to help construct their story. I basically turned the small town into a film set. 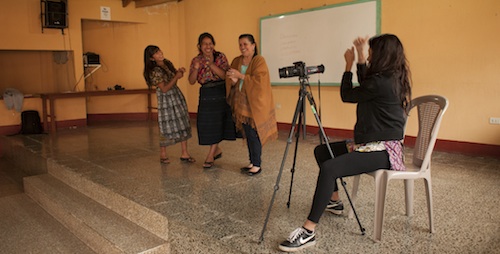 The difference in the process of making this film for me was remarkable. It was empowering, it was positive and it was a lot fun! Instead of having that sometimes uncomfortable feeling putting a camera in the face of women and girls and asking them to tell me very intimate stories that are sad and tragic, I was able to shoot the film in a way that gave the girls a sense of achievement and power. It also gave them some well-deserved attention. Many people in town wanted to know why a camera crew was following the girls around, and since we elicited cameos from various people in the community (other young people, adult male workers, their mothers, government officials, etc), a ripple effect took place and the message behind the film reached small households and sparked important dialogue.

"For me it was a great experience and maybe it will send a message to youth and especially girls to get them to reflect and maybe say, 'how great, what a strong thing they did {for the community}, because in Concepción Chiquirichapa there has never been a film like this.'" said one of the girls in the film.

I'm now entering the post production phase of the film and it's equally exciting. I have written the script so that it begins and ends with an animation of an awards ceremony where one of the young girls, portrayed as an adult and an accomplished doctor, is accepting an award. As she gives her acceptance speech, she starts telling the story of her as a girl. The film then segues into the storyline we filmmed in Guatemala.

With such a great story and process, a lot of positive energy is surrounding the film. Working with the nonprofit Adolescent Girls' Advocacy & Leadership Initiative (AGALI) who supported leadership training for the girls in the film through their fellows program, we're building an innovative distribution strategy. We've managed to get the support of other leading organizations such as the UN Foundation, Women Deliver, Girl Rising, Every Mother Counts and others to help promote the film when it's done.

Without giving too much away, we are currently arranging sneak previews of the film for the International Day of the Girl this October in both New York City and San Francisco, and will seek a film festival run before distributing the film in the US and Guatemala starting on International Women's Day 2014.

Those who know my work or have seen me speak publicly know that I try to evolve as a filmmaker and as a global health and development specialist. From advocating for the involvement of creative communities in the maternal health "revolution", to bringing films to international conference settings, to questioning the lack of enough people of color involved in the development arena, and creating my MDGFive.com new media site that unites artists and activists around maternal health, I feel like I am getting closer to freeing myself from personal constraints that have held me back from doing all that is possible. I feel with this new film, ¡PODER!, my soul is getting more right.

If you are interested in supporting this new film, becoming an associate or executive producer or following its roll out, please visit www.gofundme.com/PODER.