My husband and I are learning to dance.

Every Tuesday night, we tromp through the snow in our boots and woolen hats, carrying our new dancing shoes in cardboard shoeboxes through the cold night. Class begins at 8:30 and the field house at the community college is virtually empty by then. We stamp off the snow and slip down the muddy halls, nodding to the night watchman who is sleeping peacefully at his post.

Our teacher is Nora, a curvaceous senior of about 70 perched on the middle of the floor in rubber-soled pumps. She has a thing for Rod Stewart and thus, we drift in -- couples and singles, mothers and sons -- to the soft, lilting sounds of Rod the Bod singing American Standards. "The way you look tonight..."

There are two dozen of us learning to dance.

There's Donovan, a boy of 17 and his mother, Rosetta. Norris is single, with broad, thick shoulders and a big wide-toothed smile. There's several couples about our parents age. The two grown sons that come with their mother, Terry. A few single ladies in their mid-forties who giggle and dance with one another.

We are not the youngest couple in the class, but we are the only newlyweds. Seven months into our second marriages, Michael and I mean to do everything different this time around. It's scary. "It's a new dawn, it's a new day, it's a new life".


To learn to how to dance seems like an extension of this. Marriage, like dancing, can be very hard to do well and takes practice. It's terrifying when you are doing something you thought you knew how to do -- only to find you might actually know nothing at all.

In class, we are learning The Foxtrot. Four beats, first position ballroom. One step, two step, boxes in several patterns. We try hard, my husband and I. And in the beginning, we aren't so much as taking it in, but rather, we are letting go. Unlearning old moves, the ones we used to use, when we danced before, with other partners. It seems, in the beginning, with every beat we are casting off our broken things -- promises, vows, hearts.

We struggle with the patterns, a complicated rhythm of a new union between two bodies with bruised toes and egos. I forget that I am supposed to let him lead and I try to move the chaser into a box step. He doesn't give me enough time, the right sign, that he is ready to turn to the left. He doesn't hold me close enough, firm enough. I lean into him too much and forget to hold my head up.

And tonight, we get frustrated and let go, breaking Nora's only rule on the dance floor. "Even if you make a mistake" She shouts in her headset, "Just keep dancing."

But I step back and glare at him in the bright light, angry at him and myself that we can't seem to get it right. Afraid we won't ever get it right. We have so much at stake, as dancing becomes a metaphor to me, for a marriage so new and yet already, so complicated. Doesn't he see?

People are watching. Nora is watching. My husband walks away for a minute, turns around in a circle with his eyes closed as though he is choreographing a routine in his mind.

There are mirrors all along the wall, I see my angry face in them and I am scared of my own expression.

My husband is more timid when the next song plays. He is afraid to let me down.

"Take her hand. Let her come in to you," Nora shouts into her headset, her brown stretch pants a blur over my left shoulder. It could be 1955 or 2015, but the rules of dance have never changed. "Do not go to her, gentlemen".

He wraps his arm around the small of my back and I put my left thumb on the little divot in his arm where muscle meets bone. Rod croons and somewhere behind me Nora is swaying to the music, dreaming of billowing ballgowns and charming suitors or an era bygone.

"Embrace me, my sweet embraceable you
Embrace me, you irreplaceable you
just one look at you my heart grew tipsy in me
You and you alone bring out the gypsy in me"

Michael takes my right hand. I watch the buttons of his shirt rise and fall with every breath.

I come to him.

And little by little, side step by side step, we find a tempo that feels right.

Nora says you learn to sense these things. That when a man takes a woman in his arms, they are promising each other something for as long as the music plays. Something special, a commitment.

The one song is over now, and another begins but I don't let go of Michael's hand. I come into him closer and he turns me around and around in front of the tall mirrors. Maybe people are watching. I don't see them. All I see is his long body and my short one, reflected back to us. Learning to move in the space we have been given, in the life we are re-creating.

We are dancing to a brand new cadence now, with hope. Trying with all our might, together, to make sure that the music never ends. 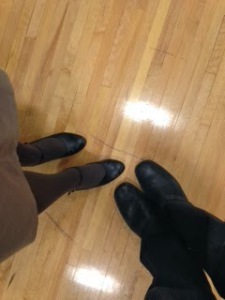 More:
weddingsdivorceLoveRelationshipsLove & Sex
Newsletter Sign Up
A weekly guide to improving all of the relationships in your life
Subscribe to HuffPost’s relationships email
Successfully Subscribed!
Realness delivered to your inbox