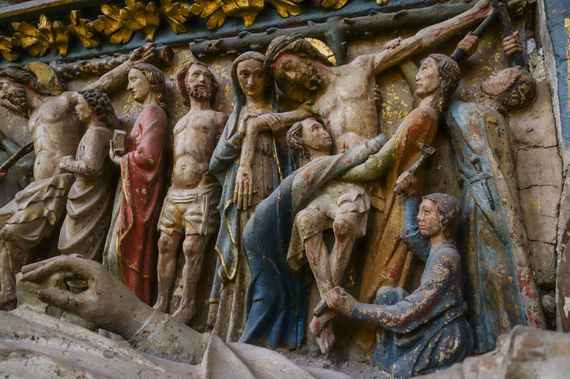 Keep your mind in hell, and despair not.

Ah, children, ah, dear friends, do not be afraid of life!

How do we sing the Lord's song in the shadow of terror? In solidarity with all the victims of Brussels and the whole human family this week, I protest, I rage, I grieve, I pray. But I must also try to think.

Indiscriminate terror has long been a scourge on this earth, but its globalization through television and social media has now made it emotionally inescapable. Were I to dwell in the uttermost parts of the sea, I could not flee from its presence.

So as we try to absorb the terrible news from Brussels, how do we "despair not" even in the face of monstrous evil? No simple task, and easy answers seem disrespectful in the time of weeping. But I do believe the antidote to despair is to keep the faith. We must never forget the sacred story we belong to. Even at the grave we make our song: Alleluia, alleluia, alleluia.

The terrorist, on the other hand, belongs to a story which for most of us in inconceivable. Don DeLillo calls terror "the language of being noticed," a kind of performative rhetoric designed to bring a neglected or disregarded worldview into the open by subjecting others to the violent norms of its alternate reality. Terrorists see themselves as global victims, in search of a global audience for their cruel narrative. Mark Juergensmeyer, in Terror in the Mind of God: The Global Rise of Religious Violence, explains this terrorist rationale:

If the world is perceived as peaceful, violent acts appear as terrorism. If the world is thought to be at war, violent acts may be regarded as legitimate. They may be seen as preemptive strikes, as defensive tactics in an ongoing battle, or as symbols indicating to the world that it is indeed in a state of grave and ultimate conflict. (10)

In the minds of many terrorists, the war they are so eager to wage is apocalyptic, a cosmic conflict of good and evil in which there is no compromise or bridging of differences. They are, in DeLillo's term, "lethal believers." And the very worst thing we could do in response would be to play the part they have written for us: satanic enemies in a cosmic struggle. The proposals of certain American presidential candidates to "bomb the hell out of them," or bring back the good old days of torture, would play perfectly into the terrorists' hands, conceding the primacy of their deadly story.

However, I choose to belong to a better story, the one enacted and embodied in the powerful liturgies of Christ's Passion. Step by step on the Way of the Cross during Holy Week, Christians will bring to mind and heart the saving journey which Jesus made, without weapons, into the abyss of suffering and death.

Renouncing all violence and hatred, Jesus remained faithful to the end. After pouring his whole life into a ministry of healing, forgiveness, and reconciliation, he continued to show us the face of love even as he was tortured on the cross. "Father, forgive," he said with his dying breath. To the last moment, in his most bitter hour, he remained the human who shows us God by doing what God does.

Which story do we choose to live in? The story of terror and violence, or the story of self-diffusive love? Both are costly in the end, but only one leads to new and unconquerable life. Even after Brussels, the word remains: Be not afraid! Love makes the abyss into a Way. In the words of a 12th century hymn, "the gates of death are broken through / the strength of hell is tamed."

When medieval women mystics contemplated the cross in prayer and vision, they saw not death's triumph but a kind of birth. The crucified Jesus was like a woman in labor, enduring pain and travail in order to bring us all to birth. As Marguerite d'Oingt wrote in the 14th century:

Ah! Sweet Lord Jesus Christ, who ever saw a mother suffer such a birth! For when the hour of your delivery came you were placed on the hard bed of the cross and ... in one day you gave birth to the whole world.

To see such a death and call it birth is the central act of Christian imagination. It is why we declare God's victory at the cross. We don't wait for Easter Sunday. We declare victory on Good Friday because the Passion isn't just a story about violent powers that always trample the weak and kill the prophets. It's also a story about the Realm of God, where dry bones breathe and lost hopes dance, where the prodigal is welcomed home and the tears are wiped from every eye. The Love that makes such a realm was nailed to a cross, but was not consumed by it. Death did what death does, and God did what God does.

And on the outcome of that story, I stake everything.