Corporate social responsibility can mean many different things to both nonprofits and corporations. When these two very different entities form a relationship, it can be a delicate dance of understanding each organization's respective expectations and realities. As well-intentioned as companies often are, there can exist an expectation that the nonprofit will also contribute to the sponsor in some type of significant way. Having a "good fit to brand" tends to also sit high on the list of criteria companies use to choose a charity.

That's why we at Trickle Up -- a U.S.-based organization working with the world's poorest and most vulnerable -- were surprised when in 2008 we received a phone call from a Boulder, Colorado-based running shoe brand named Newton Running. Newton Running shoes are designed to facilitate a running style known as "natural running," which means landing first on the forefoot/midfoot instead of the heel. It is a young, family-run running shoe company that has made corporate social responsibility a core part of its philosophy from day one. CEO and co-founder, Jerry Lee, told us they wanted to make a contribution from the sale of each running shoe to Trickle Up. We were thrilled that they wanted to include us, an organization focused on helping some of the poorest women in the world build livelihoods, as part of their philanthropic mix. 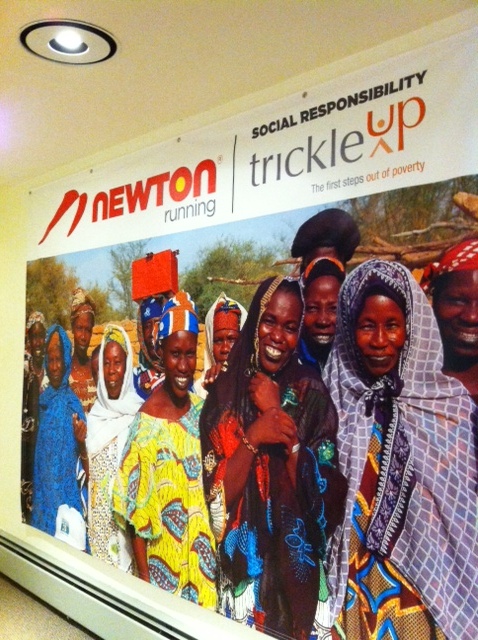 To our surprise, there were no requests from Newton Running regarding outreach to our donors to let them know about their new company, nor were there inquiries for free advertising on our website or blog. What they did want is to travel with us to the places where we work so they could understand our mission better. They wanted their staff and customers to learn about the conditions of poverty and what could be done from our side to give back. In 2009, Jerry's wife and daughter, Donna and Wendy Lee, also Newton Running employees, traveled with our team to remote villages in Guatemala to meet some of the people Trickle Up serves and to witness our program first-hand.

Over the four years since that first phone call, Newton Running has donated $68,000 to Trickle Up. For years, Newton Running has also exhibited at Ironman expos where they have helped shine a light on extreme poverty as well as spreading the word about Trickle Up's work through other events, their blog, website and through direct outreach to their sponsored athletes. And just this week, at Newton's annual meeting with its retailers, we are announcing a new partnership in which Paula Newby-Fraser, one of the greatest triathletes in history and a Newton ambassador, will serve as a co-chair for a new Trickle Up fundraising campaign.

Newton Running, like serious athletes in any sport, comes with a deep understanding of what it takes to get to the finish line. There are no shortcuts or silver bullets. You need to train hard, build skills, persevere and always keep the end goal in sight. The same can be said for addressing extreme poverty. For TrickleUp participants, the poorest of the poor, who work hard to feed their families and send their daughters and sons to school, it's not an easy road out of poverty.

This partnership reinforces what we knew all along: the best relationships aren't only those that seem like perfect pairings of product and mission. Partnerships that are forged by passion, a willingness to learn and long-term commitment are the ones that can truly make a meaningful impact. We think that's a great "fit to brand."