Keith McCullough is nothing if not committed. “For better or worse, I’ll die here,” he says in reference to Hedgeye Risk Management, the independent investment research firm he founded in 2008. "Sink or swim, that’s what we have."

McCullough sees himself as fighting for the little guy over entrenched interests. He tends to describe his Stamford, Connecticut-based firm, which sells investment advice to institutions and individuals, in antagonistic terms: against traditional Wall Street research, against financial media, against pretty much every market pundit.

In turn, McCullough attracts antagonism. A former hedge fund manager, he is largely known in certain segments of the financial media for his social media feuds with certain segments of the financial media: CNBC’s Jim Cramer and Steve Liesman, their former colleague Ron Insana, blog ZeroHedge, Bloomberg’s Joe Weisenthal, hedge fund manager Doug Kass and prospective-customer-turned-critic Carmine Pirone, to name a few. (The fight with Pirone escalated to the point where McCullough sued him for defamation.)

Through it all, McCullough has been called a self-promoter, a fraud, a charlatan and the P.T. Barnum of finance. But he's convinced that he's right, and that his critics are some combination of dead wrong and jealous.

It's that conviction -- along with McCullough’s frustration with CNBC, where he used to be a frequent guest -- that led him to focus on building his own ways to “tell the truth first in the most efficient formats.”

Hedgeye now has an online video channel aimed at individual investors, and has hired producers away from CNBC to run it. An outgrowth of work the company has been doing since 2010, the videos' combination of mass-audience appeal and high-level sources, McCullough says, “is our ESPN’ing of finance.”

The Hedgeye CEO likens the company's approach to that of Fox football commentator and former Dallas Cowboys quarterback Troy Aikman, who explains strategy on camera for a mass audience, then in the privacy of the locker room assumes the role of confidant and mentor to current players.

“I think what I have is more that pro-to-pro, buy it or sell it” dialogue with institutional clients, McCullough told The Huffington Post.

One of Hedgeye's daily videos.

Polemics are part of the furniture at Hedgeye. Though much of the office looks like standard-issue Connecticut finance -- where young men in dress shirts and Vineyard Vines fleece vests sit at white desks and stare at multiple monitors -- the space also includes a Republican-themed conference room complete with club chairs, a cowhide ottoman, an antler chandelier, a silver-plated AK-47 table lamp and portraits of GOP leaders from Lincoln to Nixon. (There's a Democrat room as well.)

The tone of the firm's analysis is brash and conversational. The morning research note is probably alone in the industry in combining Bayesian analysis, hashtags like #globalslowing and #deflation and image macro memes. And Hedgeye is likely the only research firm that employs its own cartoonist. 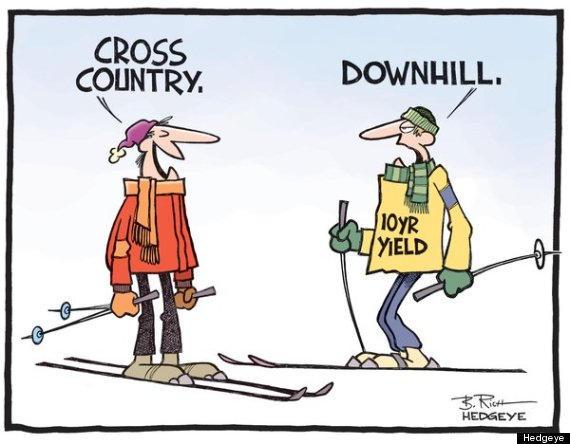 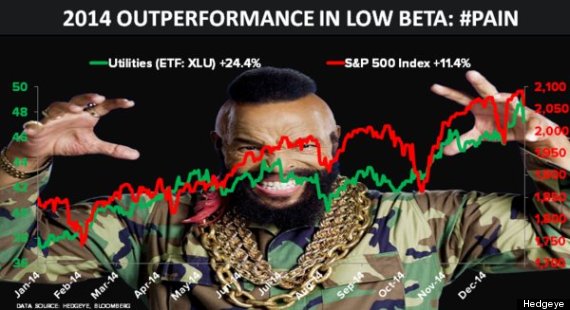 A Hedgeye chart showing U.S. utilities' performance against the S&P 500 in 2014.

Those who watch Hedgeye's video channel or pay to subscribe to its research won't hear the advice most retail investors need. They won't get someone calmly and cheaply telling them to trade less, ignore pretty much all short-term investing advice and just buy low-cost index funds. Instead, McCullough thinks it's his job to tell retail investors who trade frequently how to do it better, and to help institutions boost investment returns.

“We’ve branded ourselves as being Mac versus PC,” McCullough says. The PC in his analogy stands for both traditional Wall Street research, which he calls “conflicted, compromised and constrained,” and the financial media. Hedgeye is the Mac.

The main thing that attracts people to Hedgeye, though, is McCullough himself.

Jim, I am formally warning u - unblock or everything u say will be audited by Hedgeye Risk Mgt police @jimcramer

@rinsana @CGasparino yeah, u were in the room - when I walked out, I said to the guys, Ronnie better have inside info b/c he's f'n clueless

Talking with McCullough, it’s clear he enjoys being a Twitter pugilist.

“Yeah, I led Yale in points. But I also led Yale in penalty minutes,” he says, referencing the days when he was the captain of his college hockey team. “That’s who I am.” He’s energetic and direct, occasionally laughing boisterously at his own jokes and insights.

“He’s bombastic, but it’s tactical. He’s doing it to get attention for Hedgeye, and hopefully that leads to more subscriptions,” said the investor, who asked to remain anonymous. Two other hedge funds and the seed fund 500 Startups also have small stakes in the company.

McCullough thinks Hedgeye's critics in the financial media overlook his ability to attract subscribers and talk to big players. That's because the critics usually come across Hedgeye through "our main marketing channel," Twitter, where they encounter McCullough at his most antagonistic.

"Sometimes when I’m on the ice punching you, I look a little more like the person that they want me to be, which is just another lying Wall Street scumbag, which is false,” he says, adding that investors who get to know him find out he's "self-effacing to a fault.”

Even if that's true, McCullough certainly isn't shy when he thinks he's right.

“Investigative research and investigative journalism, what’s the difference? We’re trying to get to the same point,” he says, comparing Hedgeye’s aggressive short calls against energy companies Kinder Morgan and Linn Energy to Ida Tarbell’s crusade against Standard Oil. Though Kinder Morgan stock is up about 16 percent since Hedgeye’s bearish call in September 2013, the bet against Linn has worked out better for McCullough. Linn is down about 70 percent since Hedgeye’s March 2013 short call on the back of an SEC investigation into the company’s accounting practices.

McCullough is also proud of his prescient call earlier in 2014 that bond yields would fall, a prediction that was out of the mainstream at the time.

He has had big misses too. In 2010, he predicted that the Federal Reserve’s quantitative easing program could, over an undefined period of time, lead to the collapse of the U.S. economy. So far, of course, it has not. A close analysis of his 2013 recommendations showed that if you’d traded only on Hedgeye’s suggestions, you would have made just 0.3382 percent. In contrast, the S&P 500 was up 31 percent that year.

But McCullough says his buy and sell signals shouldn’t be used to create a portfolio.

The portfolio he currently recommends is 52 percent in cash and just 6 percent stocks, an asset allocation that goes beyond conservative and into territory a financial doomsday prepper would appreciate. But even that's not McCullough at his most extreme: In 2012, he recommended a 100 percent cash portfolio.

The Hedgeye CEO is unperturbed by criticism about the quality of his product or how he presents it. He believes he has always accurately represented Hedgeye. “We have never said we are a hedge fund,” he says in response to allegations that language in his real-time alert product implied he was making trades, rather than recommending them. “I’m basically the journalist of the buy-side,” he adds.

Independent research is a business which has always seemed almost on the verge of being about to break through, but it's never really been able to stick. McCullough thinks Hedgeye’s mix of single-stock research, macroeconomic analysis and daily alerts can be different. “There’s no top to this, in terms of our ability to grow content,” he says.

Hedgeye currently has 23 analysts and 57 employees in total. The company says revenues grew about 25 percent to more than $12 million last year. McCullough sees those dollars as a vindication of his views.

Hedgeye has hired an executive recruiting firm to help attract new hires, and McCullough says his company has no problem luring in talent. Perhaps, he says, that’s because “we’re in Stamford, so we’re kind of the only game in town.”

Though Stamford is teeming with hedge funds, McCullough doesn’t seem to think he has much competition in building the ESPN of finance -- a point he makes with a reference to hedge fund giant Citadel and college hockey.

“If the captain of Cornell, who’s elected by his teammates, was running money at Citadel and decided to open up Hedgeye II, that would be my first very relevant competition.”