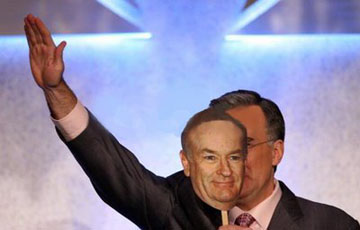 Actual shot of Olbermann, via Gawker.

"Just because your voice reaches halfway around the world doesn't mean you are wiser than when it reached only to the end of the bar." - Edward R. Murrow

Keith Olbermann's special comment was something else. As if this race needed more stoking of the fires, Olbermann did not miss his chance to chime in with an anti-Clinton crowd pleaser. He started by thanking the Clintons, then ripped the scab off of every primary wound that's come before today. At one point the pompous anchorman actually squealed "David Duke," while doing the Obama camp's greatest hits, resurrecting them all, including Bill Clinton in South Carolina. The delivery was so overwrought and dramatic at one point I was almost convinced he was going to start talking about Jesus, then ask for cash. But what exactly does his opinion mean anymore?

Countdown long ago became The Obama Hour, and Mr. Olbermann's protestations to the contrary are ridiculous. Keith Olbermann is simply carrying the candidate's anti-Clinton message openly on cable. But the anchorman's rhetoric has now reached screech:

OLBERMANN: I'm sorry to sound speechless. It seems remarkable to me that a campaign being run in the 21st century or even the second half of the 20th century would allow itself to be associated in any kind of way and not step back. If it was two African Americans running against each other, and one of them had somebody say this on behalf of their candidate, that the other guy is only in there because he's equal opportunity, or there's been some sort of quota system, or that he's a black man--does it not have disaster written all over it, or are we living in South Africa? (via "Countdown" transcript)

South Africa? Using the apartheid card against Hillary Clinton. Mr. Olbermann evidently is taking his cue from Orlando Patterson. It would be nice if either of these men were correct on their facts.

Seriously, would Clinton have the female support she has today if she weren't a woman? Being African American is only part of the Obama quotient, however, it is part of it. In fact, for Clinton, being the first viable female for president is the driving force behind some voters, as no doubt being an African American first is for some Obama supporters. Is either side really going to deny these facts? Meanwhile one uses race as a bludgeon, while ignoring the gender prejudice running rampant in the anti Clinton media onslaught?

Evidently Mr. Olbermann can only see through his zipper.

However, the acrimony unleashed between Obama and Clinton supporters through Jesse Jackson Jr. or Geraldine Ferraro isn't so surprising if you consider American history. It's what makes Olbermann's "South Africa" slur even more insulting. Today's events resemble what happened almost one hundred-fifty years ago. Obviously, a simple sportscaster can't appreciate the history as America tries to break through yet another barrier thanks to the Democratic Party. But you'd think someone in the network would remind Mr. Olbermann that the woman he's been bashing for weeks and announced he would take out after tonight is breaking yet another barrier, as is her opponent, with the acrimonies of this battle actually having roots in American history:

During the years before the Civil War, Douglass was a close friend of Susan B. Anthony and her family, and often visited the Anthony home. He delivered a eulogy upon the death of Anthony's father Daniel in November 1862. However, during the years from 1865 to 1870, Douglass split from many women's rights activists over the issue of passage of the Fourteenth and Fifteenth Amendments. Anthony and Stanton refused to support the Fifteenth Amendment because it excluded women. Douglass, on the other hand, believed with many abolitionists that it was important to secure the rights of African-American males before working to achieve the rights of women. Their argument was both public and private, and there was resentment and hurt on both sides. (source)

Douglas later rejoined the women's rights movement, and along with Anthony and Elizabeth Cady Stanton, was hailed for being a women's rights pioneer, with Anthony singing Douglas's praises after the rift had healed. We do get over these things, especially if left to fight them through organically, without a cable carnival barker pushing both sides on. So what we're living through today is not without it's historical foundations, as well as built in biases, though as we hit the ground fighting in the 21st century, sexism is still seen as something much more acceptable than perceived racism, which includes any attempt to right its wrong by pointing out that prejudice goes both ways. When trying to make that argument a witch hunt inevitably ensues.

In today's American politics free speech has become a myth.

But censorship screams should not rise up when asking for fair treatment for femmes.

For months and months we worked to get Chris Matthews to back off of his horrendous sexism. Eventually, at long last, he apologized. Shortly thereafter came David Shuster, whose remark about Chelsea working for her mother was so over the top anyone could appreciate it was a slur. But not David Shuster, who basically believed he was punished and suspended because Chris Matthews wasn't. Since Shuster's suspension, however, Matthews has been fairer to Clinton, and is also one of the only people to handle the issue of race and the campaign even remotely fairly.

No network has been more tone deaf on Clinton sexism than MSNBC, championed by the boyz club that hails from Keith Olbermann's Countdown, who now leads the cable rat pack, with the help of his male cheerleaders Eugene Robinson and Howard Fineman.

Tonight, however, Keith Olbermann is going to do something no other anchor could dare try. He's going to go on the air to single out Hillary Clinton's campaign, which is being hailed as the first ever special comment to target a Democrat. If Mr. Olbermann really was trying to live up to his sign off, which steals from Edward R. Murrow, he would also include in his special comment a word about Obama's camp and their continual sexism, starting with Jesse Jackson Jr. way back in New Hampshire, or Obama's "hoodwink -- okey-doke" talking points, which I assure you Mr. Obama will not drag out for Pennsylvania, as well as the threats and robo-calls against African American congressmen who were threatened and called "uncle Tom" for supporting Clinton. Can you remember the last time Olbermann had balance on his show; invited a pro Clinton surrogate on to balance his All Obama All the Time mantra? Fairness is not part of the "news" on Countdown.

He's become what he has railed against. Olbermann is now the Bill O'Reilly of MSNBC. A big giant head railing against the first viable female candidate in U.S. history. Sports fans, it's the latest craze. Get yer popcorn, before "Countdown" starts. Beer will be a buck.

Edward R. Murrow was respected by Americans because he kept his biases in check and no one was off limits.

The other issue is that Keith Olbermann has no idea what he's begun to unleash in Clinton supporters who are as outraged by the one sided coverage of what's happening to Clinton on race v. sexism, which is getting worse by the day. Olbermann doesn't care, because he doesn't care about the Democratic party. He's now proved he's simply a showman, through yet a preview of a special comment that will bring anti Clinton haters into the arena to see her mocked, though it's hard to see where Keith will go from his "South Africa" query from two nights ago.

Edward R. Murrow's sign off belongs to one man, someone who in no way resembles the MSNBC sportscaster who now holds anti Clinton court on MSNBC every night of the week.

But no doubt Olbermann's coverage delights Tim Russert, because the only thing it will accomplish is to aid John McCain.