Keith Olbermann announced Thursday that he is suspending his Twitter account in response to sustained and, in his opinion, unwarranted attacks over his handling of the rape allegations surrounding WikiLeaks founder Julian Assange.

Assange's legal troubles have been rife with confusion and controversy about the nature of the crimes he has allegedly committed. Many have urged people not to dismiss the rape allegations as merely politically motivated, while others have said they are a smokescreen for a war against WikiLeaks.

One of the people making the claim that the case has been overblown is filmmaker Michael Moore, who also contributed $20,000 for Assange's bail. On Tuesday, Moore explained why he had contributed the money. He also appeared on that night's "Countdown." In response, the website TigerBeatDown harshly criticized Moore for writing that the allegations against Assange were "strange" and that people should "never, ever believe the 'official story.'" The site launched a Twitter campaign to get Moore to apologize. TigerBeatDown also criticized Olbermann for retweeting a link by Bianca Jagger which dismissed the charges and possibly revealed the identities of Assange's accusers.

Olbermann began receiving a flood of heated criticism on Twitter for hosting Moore and for retweeting Jagger's post. In response, Olbermann apologized for any offense he had caused, but denied that he had done anything else wrong, writing on Wednesday:

Rape has touched my family, directly and savagely, and if anybody thinks I have addressed it without full sensitivity, then that assessment is the one that counts, and I apologize. But these accusations that I "revealed" an accuser's identity by retweeting Bianca Jagger's link, or that I 'shamed' an accuser by asking a question about the prosecution of a man governments are trying to bury, or that I do not 'understand' charges that have yet to be presented in their final form, reflect exactly the kind of rushing to judgment of which I'm accused, and merit the same kind of apology I have just given.

This did not stop the criticism, however, and by Thursday, Olbermann announced that he had had enough. He said that he would suspend his account until the "frenzy" had stopped (read from the bottom up): 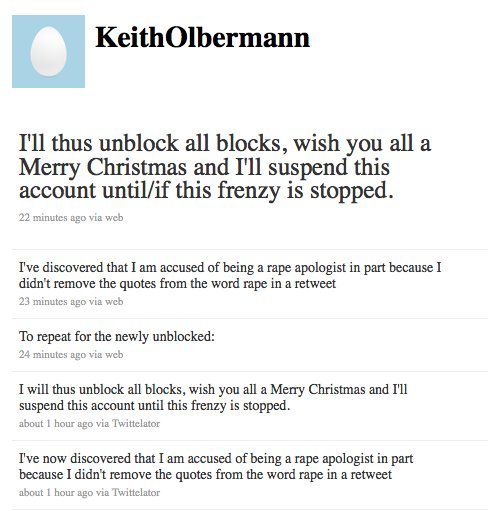 Olbermann also removed the picture from his Twitter icon.