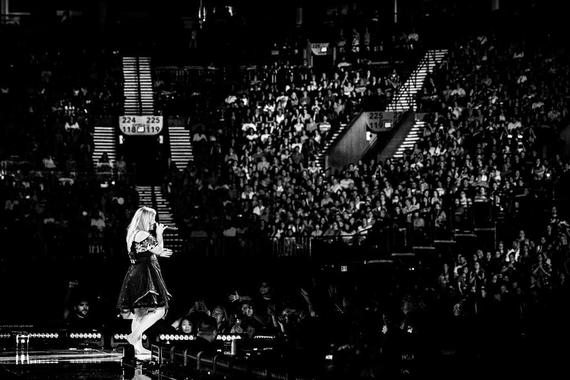 Piece by Piece, Grammy Award-winning singer/songwriter Kelly Clarkson brought the house to its feet during her long-awaited concert tour when it stopped in Seattle Wednesday night. After nearly two years, "I had to make a baby, ya'll!" Kelly admitted it was good to be back on the road.

Arguably the biggest opening act moments of the evening occurred when Grammy Award winners Pentatonix took the stage. The five-person a Capella group from Clarkson's home state of Texas didn't shy away from tackling the big guns, including their hit Michael Jackson mashup and Lady Gaga and Beyonce's "Telephone." Named after the pentatonic scale, the crew consists of Scott Hoying, Mitch Grassi, Kristin Maldonado, Avi Kaplan, and Kevin "K.O." Olusola.

Clarkson took over the spotlight at close to 9:45 p.m. and was a fireball of energy until just past 11:00 p.m. Starting with "Dance With Me" and moving right into "My Life Would Suck Without You," Clarkson owned the stage from the moment she stepped barefoot onto it. "Catch My Breath" was next, followed by a new one called "Nostalgic," that right away felt like a huge hit in the making.

Quick costume changes, selfies with the audience and signing autographs while hitting the high notes in "Mr. Know It All" were next. She told the crowd the song was for those people you see on the street that you just want to punch in the face because they think they know everything. Clarkson's ability to laugh at herself and her self-described "depressing" and "therapeutic" music made the former American Idol alum even more relatable. Enter here more selfies and autographs from the heart-shaped stage.

Clarkson moved into her next song called "Second Wind" and then "Invincible" before explain that the next song was about her rocky relationship with her father who left her and her sister when Clarkson was only six years old. She explained how interesting it was that he should come back into her life now when she has something of value -- money -- to give him. A heartbreaking title track, "Piece by Piece" showed a wounded bird onstage -- and the audience loved her for it.

From there, Clarkson kept the music mellow with "Because of You" and "Break Away." She described writing "Tightrope" during her last tour and explained that it was about a relationship -- any relationship -- that has its ups and downs. Then it was a leap into the way past with "Behind These Hazel Eyes," but not before telling a gentleman in the audience that her and her hubby -- Brandon Blackstock -- make "beautiful unicorn babies together."

One of the highlights of Clarkson's Seattle set was the fan request portion of the evening. This is where fans get to tell the star which famous song they would like her to cover. Every city is different, and this one was Wynonna Judd's "No One Else on Earth." Clarkson said she was pleasantly surprised because Country songs don't normally make the cut. She said she loved Judd's "Bluesy-Country music" and had been singing the song since she was 10 years old.

Music that followed included "You Love Me" and the power anthem "Stronger (What Doesn't Kill You)." Then Clarkson burst into the blood-pumping "Heartbeat Song" before a surprise reunion between Clarkson and Pentatonix onstage for their mashup version of "Uptown Funk" and "Walk Away." Clarkson then ran offstage to prepare for the Encore, which included the backup singers having their own moment in the spotlight with Jessie J, Ariana Grande and Nicki Minaj's "Bang Bang."

Clarkson ended the Encore with "Miss Independent" and "Since U Been Gone" and the audience did not leave empty-handed. The energy in the room was palpable and will be felt for many more moons to come.