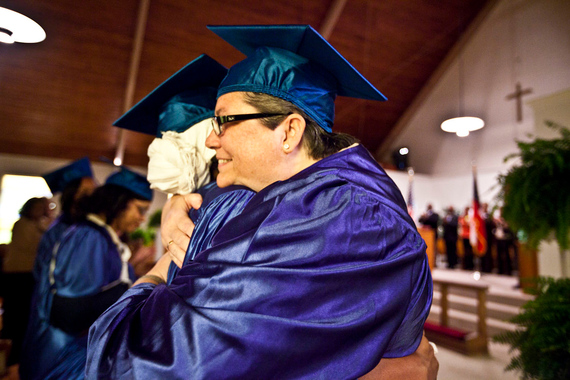 Kelly Gissendaner is scheduled to be killed on Monday, and there is not much that can be done to stop it.

I interacted with Kelly only once, and only briefly. These were the words I said to her: "This is the body of Christ, which is broken for you; the blood of Christ, shed for you." I served her communion, a Christian feast of fellowship and thanksgiving, when I worked as a prison chaplain intern at Lee Arrendale State Prison two years ago. I offered her the words of grace that, for a Christian, speak to the fundamental situation of humanity: redemption. These words are as true for Kelly as they are for me.

Kelly is a person profoundly transformed, with a powerful voice speaking good into the world. Convicted for her part in the 1997 murder of her husband, she enrolled in and graduated from the Certificate in Theological Studies program at Arrendale State Prison for Women. Through this program, she grew into a new person with purpose and hope. She experienced forgiveness and gained confidence through grace and redemption. She became pen-pals with the famous German theologian Jürgen Moltmann, who came to speak at her graduation. Twelve people testified on her behalf at her clemency hearing last Tuesday, including her prison chaplains, former theology professor, a former inmate, and others. The testimonies of her children, who were literally pleading for the life of their mother, were passionate and gripping, as is the testimony of a woman I know, Nikki Roberts. Nikki was a student in the theology class I taught at Arrendale and, before that, one of the inmates I worked with as a prison chaplain. Nikki speaks about how Kelly was a lifeline to her in a time of desperation and hopelessness: "She told me, 'Don't give up your power. Don't give up your voice.'" Nikki was on suicide watch at Metro State Prison and Kelly was in a cell next to her. Through an air vent, for three weeks Kelly kept Nikki encouraged and "alive by words."

She told me, 'You'll live. You'll not die.' She was my encourager - when I had no real sense of purpose, when nothing else was making me feel alive, she told me about the theology program...and after that, everything literally changed, literally.

All of these and more are compelling reasons for commuting Kelly's sentence to life in prison; yet, that has not happened. In spite of such powerful testimony, Kelly was denied clemency and is condemned to die. Someone who has lived the reformation that incarceration ostensibly aims to achieve--rehabilitated, completely transformed--is being put to death. Thus, not only do we see a miscarriage of justice in Kelly's case; we also see the brokenness of the system: its incoherence, wantonness, and absurdity.

In a recent interview, human rights lawyer and founder of the Equal Justice Initiative Bryan Stevenson has addressed the irrationality of the death penalty, stating,

There is no natural way to systematically engage in killing another human being who is not a threat to you, who doesn't have to be killed, but is killed to express what kind of people we are and what our society wants.

Citing his experience as a lawyer of a death row client, Stevenson explains that the execution was not only surreal for him, his client, and the client's family, but was also surreal for the corrections guards and officers--for those who were charged with carrying out the actual killing. The liturgy, if you will, of death was recognized by those carrying it out as grotesque, a horrifying parody of justice. In spite of--and perhaps through--being a highly controlled process, the execution of justice reveals its own fatal flaws.

Stevenson describes this process as dehumanizing for all involved. Significantly, this "all" is not only those who physically carry out the execution. The voyeurism surrounding state execution belies the presumed disinterestedness of the public. Though rituals of hiddenness seek to distance the public from the actual killing, the contaminant of dehumanization in execution does not just affect those few who administer the drugs, who strap the person down to be killed, who--if necessary--forcibly separate family members clinging to their loved one as they go to die. It spreads out further, to the citizens comprising the state in whose name the person is executed, and to those who participate in the execution as spectacle through the media. The media coverage of Kelly's last meal is pornographic and obscene, and those who take part as avid spectators not only dehumanize Kelly, but dehumanize themselves. We who consume this as entertainment enact a different kind of communion, a perverse and horrifying one devoid of grace. It is not life-giving, but death-dealing. In this communion, the body politic that is supposedly constituted by this act falls apart, and disintegrates. Dehumanization manifests socially, as well as individually.

In the face of such a system, and in light of the hours dwindling until Monday evening, it is easy to lose hope. It is difficult to see beyond the void that is the reality of injustice, to trust that good will conquer evil. Yet, see and trust we must, assured by things hoped for and convicted by things unseen, knowing and believing that transformation, hope, possibility, and redemption are alive, even in the face of death.

Kelly's own words, spoken to the Certificate in Theological Studies graduating class of 2011, convey this more faithfully than I ever could.

TO THE CLASS OF 2011: I challenge you to step up the next level of your character, growth, and development. In your pit, or prison, receive the word and revelation and act on it; your life will never be the same. I implore you not to allow prison to rob you of your dream or vision, nor of your dignity or self-worth.

In all of us, there are untapped abilities. I encourage you to write that book, start that ministry, teach, study, pursue your dream.

Know that suffering can be redeemed. There is only one who can bring a clean thing out of something unclean, or turn a tragedy into a triumph, and a loser into a winner. When this miracle occurs, and only through Divine grace, our life is not wasted. When blind eyes are opened, then we all will see the greater purpose.

Let us put off hatred and envy and put on love and compassion. Every day.