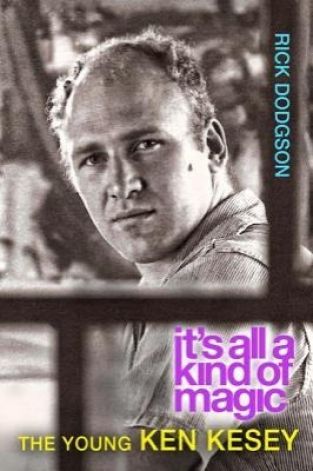 In the mid-1960s, Ken Kesey stormed the public stage like few writers ever have. His first two novels, One Flew Over the Cuckoo's Nest and Sometimes a Great Notion, were immediate American classics and best-sellers, soon to appear on stages and in films featuring very famed actors. Tom Wolfe's Electric Kool-Aid Acid Test detailed Kesey's cross-country adventures with his band of "Merry pranksters" and beat icon Neal Cassady, and made both himself and Kesey even more renowned. And then Kesey, beset by legal and other troubles, basically stepped offstage, spending the rest of his life as a family man and occasional author with a notably lower profile until his death in 2001.

But where had he come from? His youth was akin to that of a real-life Huck Finn, who transformed into a revolutionary counter-cultural figure. That's the story of It's All a Kind of Magic: The Young Ken Kesey, Rick Dodgson's biography of the first thirty years of Kesey's life http://uwpress.wisc.edu/books/5162.htm. It shows that, even in his early years, Kesey lived an exuberant life on center stage, whatever he was up to.

Dodgson is a history professor and his book began as his doctoral dissertation and sometimes reads that way, but overall his tale is well told. He started by befriending Kesey and gaining access to large archives of previously unseen material, and then doing over a decade of research and writing to produce this engrossing tale. Born in Colorado, Kesey's family moved to Oregon when he was seven, and it seems from boyhood he was larger than life. Star athlete, stage actor, school journalist, frat boy, and yes, prankster, he perfectly fit the mold of a Big Man On Campus, in fact named "most talented" overall. The lure of acting brought him to Hollywood in the late 1950s, where he uncharacteristically failed at following his idol Marlon Brando onto the screen. Having published a few stories and written many more, he then gained admittance to Wallace Stegner's elite writing fellowship at Stanford and was nurtured and born as a writer. He simultaneously rubbed people the wrong way and impressed them, including Stegner himself.

Kesey's years on the San Francisco peninsula are the heart of this book - on an unpaved Palo Alto street called Perry Lane he became the center of a legendary Bohemian "intellectual party scene." People lucky enough to have been there recall vividly the wild revels, readings, and sometimes mayhem that regularly occurred, and Dodgson retells their stories in detail. Notably, Kesey had a job at a local hospital to pay the bills, and also underwent legal, official experiments with psychedelics courtesy of Stanford researchers and the CIA - the idea of Cuckoo's Nest was sparked in part by a peyote trip.

Yet despite all these distractions, Kesey was also writing with diligence, and all these experiences, coupled with his rural Oregon upbringing, informed his unique first novels. When Perry Lane was sadly condemned and bulldozed, he moved his family to the little town of La Honda and continued the writing - and partying, in what his friend Hunter S. Thompson called "the world capital of madness." Kesey started but abandoned a novel titled "One Lane" about those days.

"Fame is a wart," Kesey opined, after he had found it and found it wanting. This book stops abruptly as Kesey's books, name, and charismatic reputation were on the verge of wide renown. The "acid test" events, famous 1964 "Furthur" bus trip, Grateful Dead as house band, pot busts, fugitive episodes and more were coming soon but have already been more than adequately detailed by Kesey himself, Wolfe, and many others. Here is all that came before, when Kesey felt that what he was working on was bigger than him by far - that his visions were those of an entire movement, towards a peaceful revolution.

"We're on the verge of something very fantastic" Kesey predicted in 1963, "and I believe our generation will be the one to pull it off." Dodgson argues that Kesey and his circle were "true pioneers" whose influence still runs through much of our nation's changes of the past few decades. "It was time for a real-life Prometheus to spread the fire to the masses and Kesey was the ideal man for the job." Well, yes, and alas, no, but this fine story of that temporary, partial revolution and the formative years of a key figure who sparked some of it is a very worthy read.

Postscript: I only met Kesey a couple of times, in large group settings. He was friendly, low-key, and an exception to the general warning to avoid meeting one's heroes. One of those evenings, backstage at a 1991 Holloween Grateful Dead concert, featured Kesey joining the band onstage during their signature psychedelic tune "Dark Star" to recite a bit of poetry by e.e. cummings:
https://archive.org/details/gd91-10-31.sbd.gardner.2897.sbeok.shnf