The Golden Globe-winning actor Ken Wahl -- perhaps best known for his starring role in the Wiseguy series, which still has a strong cult following, and was recently named by Esquire as one of the top 10 cop dramas of all time -- has played plenty of heroes and tough guys in his career, but he'll be the first to say that he's no hero, especially compared to the men and women serving in the U.S. military. "I have so much respect for the sacrifices they make. Military life is not easy, and they know that when they join, they are going to be risking their lives for something bigger than themselves, and I greatly admire that," he says. So when, in early 2013, he heard a news report that an estimated 22 U.S. military veterans commit suicide every day, he couldn't just stand by and do nothing. 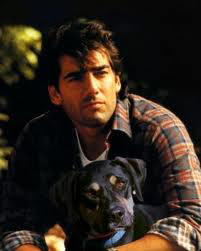 "I was astounded, I was walking in circles thinking what can I do?," says Ken. Retired from acting since the mid-90s due to a serious neck injury and subsequent disability (see my 2013 post on Wahl for this backstory), he calls this moment the "genesis of my second calling." In researching the issue, he saw that many of these suicides were directly related to Post Traumatic Stress Disorder (PTSD) or Traumatic Brain Injury (TBI) -- serious combat-related conditions that, while being highly debilitating , are less visible than other physical injuries, leading to a great sense of isolation among those living with them.

Although Ken stresses that his own "civilian injuries" -- which have left him dealing with chronic pain -- cannot be compared to PTSD, TBI, or other combat injuries, his condition has given him insight into the kind of despair that leads to suicide among disabled veterans. "I want to make it clear that I'm not trying to compare myself to those guys in any way, " he says, "But the things they go through are similar. When you have a chronic injury or condition, you feel terrible despair -- you feel helpless, useless, a burden to everyone around you." And the one thing that turned him around when he was in that state? Caring for animals.

Wahl calls himself an "animal lover since birth," and he considers his relationship with animals -- mostly cats and dogs he'd rescued from shelters -- as the factor that brought him out of the despondency caused by his physical condition. He describes a dog who, when Ken was having a particularly difficult day, would protectively stick by his side and lay his head on Ken's chest when he slept, "as if he was guarding me." He currently has a kitty who administers what he calls "purr therapy": When Ken is suffering from insomnia, she lies on his chest and purrs. "I can feel the vibration of the purring on my chest, it relaxes me and puts me right to sleep," he says.

Thus he saw a "win-win situation" in joining the causes of animal rescue and suicide among veterans. "In caring for animals you get away from that despair, you get outside of your own head," he says. "In return, that animal loves you unconditionally, and it's very therapeutic. I'm not saying it's a panacea, but it is one thing that can help tremendously."

At the point of his "second calling genesis," in 2013, Wahl says he wasn't on Twitter yet, and had no desire to get involved in social media, but he realized that his celebrity could be put to great use in getting an audience for this cause. "I realized this was just too important, I needed to get out there and shout to everybody to try to help."

His staunch public support for veterans and his activism to help them by pairing them with adopted pets -- not to mention the fact that, unlike other celebrities, he makes a commitment to "follow back" and engage in discussion with his followers, especially if they are soldiers or veterans -- quickly led to a huge social media audience (he is @KenWahl1 on Twitter), and he now regularly receives messages from disabled veterans and family their members who report their lives being turned around after taking his advice to adopt a companion animal.

He describes one woman from Missouri who contacted him, saying she was terrified her son was in such a terrible state that he was about to commit suicide, and reported seeing her son "come back to life" after she followed Ken's suggestion and adopted a shelter dog for him. "He'd been to doctors, been on drugs, been to group therapy, but it was the dog that brought him back to life," says Ken.

Ken's activism has even caught the attention of military leaders, such as NATO Brigadier General John E. Michel, who was so moved by Ken's vocal commitment to the plight of soldiers suffering from PTSD and TBI, and his activism in pairing them with animals as therapy, that he's written about Ken on his blog, and has invited him to become a spokesperson to greater public awareness to the issue. According to General Michel, "Ken is a leader with confidence and character who has chosen to share his talent to leave the world better than he found it." (Ken and General Michel recently collaborated on a piece in the General Leadership blog.)

As for Ken himself, he says that his current activism is the most rewarding thing he's ever done, far beyond his acting career or Hollywood stardom. And he's not giving up soon. "Ever since I got started with trying to get shelter pets together with people with PTSD/TBI, I'm encouraged by how remarkably well it's working, but we have a long way to go," Ken says. "We are just scratching the surface."

Ken Wahl's message on Memorial Day? "Please, if you are feeling this despondency, this despair, just try adopting an animal." He says it doesn't need to be a cat or dog: "It's not the same for everybody -- sometimes it's dogs, cats, horses, guinea pigs, but I've heard of some people who even have pet tarantulas." He says the best groups doing work to pair veterans with animals, especially if the veteran has injuries requiring special training for the animal, are small, unglamorous grassroots organizations, but for many, the solution may be as simple as visiting a local shelter and saving the life of an animal that would otherwise face death.