Kendra Wilkinson's husband, Colts wide receiver Hank Baskett, dropped the ball in a flub that may have cost his team the Super Bowl. Kendra later stormed out in tears while Kim Kardashian celebrated the Saints' win with boyfriend Reggie Bush.

"BTW i smiled and was very happy when the Saints won cuz of Reggie bein from SD n bein a big Brees fan! :D," she tweeted Wednesday.

A look at Kendra's Twitter activity over the past couple of days shows how she turned her frown upside down.

Sunday afternoon Kendra was all smiles as she tweeted the picture below of her and two-month-old Hank Jr. all decked out for the game.

Then the normally prolific Tweeter went silent for the rest of the night. The AP reported that Kendra retreated to the back of her luxury suite after her husband's ignominious play and she was later snapped leaving the game in tears.

She resurfaced Monday afternoon with the following explanation: "I wasn't cryin cuz of the damn game it's cuz the paparazzi have no soul..they wouldn't leave me n family alone!!!!"

Kendra continued to make a case that it was her concern over Hank Baskett's safety, not her husband's loss, that brought her to tears. "people like to twist this stuff..we asked them to stop cuz of the baby n they were way too close n they didn't care at allllllll" she tweeted. 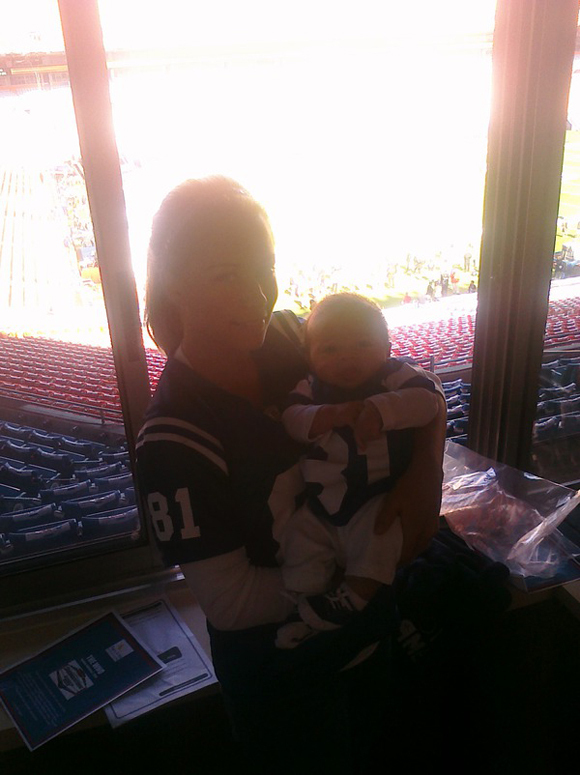