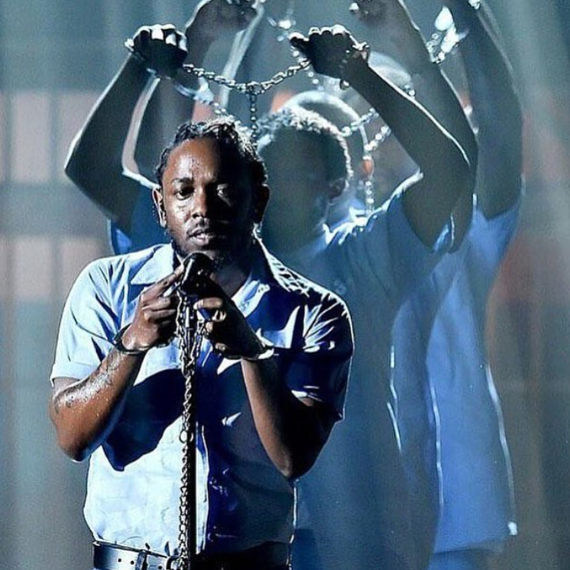 Emancipate yourself from mental slavery, none but ourselves can free our minds

So let's start with my truth -- I don't watch TV -- EVER! I don't read the newspapers, and I can barely tolerate my Twitter account, but I knew I had to get on the grid when I woke up last week and noticed numbers rarely affixed to my inbox -- family, friends, colleagues, even rare acquaintances, all directing me to various links of Kendrick Lamar's performance at the 2016 Grammy Awards.

I even had a text from my 8o-year old grandmother -- there were actually a few of them -- the last one read: "KJ, Please be sure to view all the links. You will be happy with what's happening in America!"

I obliged and clicked on the links from Grandma -- the headlines read: "Very Controversial", to "Stunning", to "Amazing" and my personal favorite -- "Radioactive" -- which implied (at least in my mind) that Kendrick's truth had the ability to spread.

Instant gratification though had to be delayed -- The loud sirens emanating from my phone was the reminder that I needed to get moving for my 6 a.m. gym session. I closed my messenger account semi-excited to see what the ruckus was about. I even managed to get some extra sleep as the MTA was once again delayed heading into Queens.

I quickly exited the train upon arriving at Forest Hills to learn that my boy, Marlon Peterson (aka MP), had overslept and would miss our gym session. MP is a social justice advocate with a specific focus around gun violence in Brooklyn. He is a lot more informed on current events than I am -- Therefore, I was disappointed I would not be privy to his analysis on Kendrick's performance.

I nonetheless battle through resistance for the next 90 minutes before heading to the Starbucks across the street to use their free Wi-Fi -- it tended to be faster than the smoke signals my cell phone company mascaraed as "High-Speed-Data". I proceed to order overpriced coffee and a croissant before getting down to business.

For the next two hours, I watched replay after replay, read headline after headline before finally deciding to take action.

First, let me say that Kendrick Lamar's performance is indeed worth of all the superlatives, but maybe that's not the point here. Maybe America's collective refusal to see the truth of mass incarceration is the real problem!?

Let's over simplify this: Kendrick Lamar (and everyone else who has made similar assertions) is telling:

Color denoting criminality and slavery are deeply rooted within the very fabric of America. The 13th Amendment theoretically ended chattel slavery -- but it served to birth another peculiar Institution -- slavery was made unconstitutional and thus illegal:

"Except as punishment for crime whereof the party shall have been duly convicted" (U.S. Const. amend. XIV).

The words within the document barely had a chance to dry before 'Black Codes' were passed by Southern States to capitalize off the conspicuous loophole. W.E.B. Du Bois and many others declared the codes as nothing more than "neo-slavery".

It became a crime to be Black and unemployed. The Codes further forbade Blacks from occupations outside those of a farmer or servant...[they] permitted beatings, incarceration, and unpaid labor if Blacks broke what were often economic and socially oppressive contracts with whites...children could be taken and placed in the unpaid apprenticeships of white businesses... Laws were also enacted that prohibited Blacks from looking whites in the eye, and in some states it was even a crime for a Black man to walk on the same side of the road as a white person ...Once arrested and convicted, the formerly freed Blacks were leased out by the criminal justice system to labor in coal mines, railroads, and, of course, plantations. This 'convict leasing system 'allowed states to lease out their mostly Black prison population as laborers for a fee, which became popular and profitable for both states and businesses throughout the South.

For such a clearly prejudiced system to flourish in light of the Emancipation, the public had to also buy into the criminality and inferiority of Blacks. As such, the images and narratives told of Blacks pre-Emancipation were generally that of a trusting, submissive and docile people...Post-Emancipation, the attributed identity of Blacks in America shifted. Social scientists, who long theorized Black inferiority during the heydays of slavery, were galvanized to observe and quantify the behavior of freed Blacks. Hoffman's landmark 1896 publication, Race Traits and Tendencies of the American Negro, saturated public consciousness with the imagery of Black men as criminal. His research negated the proximity of slavery to its subjects, negated the present social and economic plight of Blacks, but nonetheless proclaimed that, "crime, pauperism, and sexual immorality" are tendencies of Black people. Proponents of this doctrine could then substantiate their belief by highlighting the prevalence of Black men in the criminal justice system.

Cognitive dissonance Theory as proposed by Festinger (1957), posits that individuals (and societies) have an innate drive to be in harmony with their beliefs. Mass Incarceration thus challenges and disrupts America's core value of freedom and democracy; it creates a dissonance -- a disharmony, or incongruity of beliefs.

Physiologist Dr. Will Meek explains 5 ways in which we often seek to resolve dissonance:

In my opinion, America oscillates between 1 and 3 in how we chose to resolve the dissonance instigated by the mass incarceration conversation. So that leaves us with 4 and 5. But For the sake of brevity, let's go straight to 4.

Change the beliefs or actions is what Dr. Meek calls the "most obvious", and "sophisticated" method to resolve dissonance. It requires us to equally weigh and balance our truths -- the ancient Egyptians called this Maat -- they felt that individuals, and by extension society, could only have harmony when there is balance of truths and actions.

So again, WE need to make a choice -- an informed one no less. America's cognitive dissonance towards mass incarceration has negated the experience of millions of people; it also negates our ability to create social change more inline with our principles and vision of democracy. It is only by sitting with alternate truths, and critically examining them against our own, that we can truly begin the process towards freedom and democracy for all!

You can lock our bodies, but you can't lock our Minds -- Kendrick Lamar