So worried, in fact, that he has already begun analyzing why Obama will lose, if he loses, and the repercussions of that loss, if there is one, in an expansive essay for the Washington Post:

If Obama loses, I personally will feel disappointed, frustrated, hurt. I'll conclude that a fabulous opportunity has been lost. I'll believe that American voters have made a huge mistake. And I'll think that an important ingredient of their error is racial prejudice -- not the hateful, snarling, open bigotry that terrorized my parents in their youth, but rather a vague, sophisticated, low-key prejudice that is chameleonlike in its ability to adapt to new surroundings and to hide even from those firmly in its grip. If Obama is defeated, I will, for a brief time, be stunned by feelings of dejection, anger and resentment. These will only be the stronger because the climate of this election year so clearly favors the Democrats, because this was supposed to be an election the Republicans couldn't win... (emphasis added.)

He's in Stages Two and Four of Kubler-Ross, and it's only September! It's generally dicey to interpret the meaning of an event that has not yet occurred. Especially if you float "racial prejudice" as a key cause. 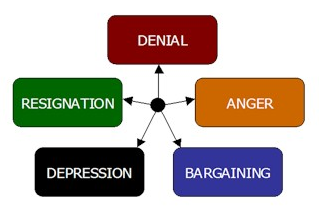 Kennedy is an astute scholar of race in America, but he's flat wrong to announce than any Obama loss must be driven by racial prejudice.

We don't know what will happen. But just to indulge Kennedy's hypothetical: If this is a close election, decided by a single state, say, or a few points nationally, then it would simply track with the last two presidential races. You know -- when white Democrats lost to a Republican candidate that many experts, reporters and most of the liberal establishment thought should definitely lose.

It is entirely possible that Obama can transcend racial prejudice and win the election; or transcend race and still lose for other reasons.

Now Kennedy could end up being right, too. If Obama loses in a blowout, underperforming compared to traditional Democrats, or losing blue states because white working-class Democrats rushed to McCain, then we can have that conversation about racial prejudice.

Kennedy didn't even wait for that, though. By the end of his essay he hit Stage Five, acceptance of that potential Obama loss:

But I hope that soon thereafter [an Obama defeat] I'll find solace and encouragement in contemplating this unprecedented development: A major political party nominated a black man for the highest office in the land, and that man waged an intelligent, brave campaign in which many millions of Americans of all races enthusiastically supported an African-American standard-bearer. I hope that I'll take to heart the wisdom offered by [one] of my students. "Obama losing," one wrote, "would be hurtful, but it still spells substantial progress. . . . Change WILL come -- the wheels have been set in motion."... Even if Barack Obama loses in November, he will have bequeathed to all America something that should bring comfort and pride to even the most disappointed of his followers. He has reached the edge of the pinnacle. And shown that we can stand atop it. (The end; emphasis added.)

What? Obama's nomination already was historic and exciting. People celebrated it when he clinched the delegate lead in May -- in real time -- and again last month, during that whole symbolic convention thing. So I don't think many supporters will be talking about the edge of the pinnacle if he loses in November.

Why should they? If the Democrats lose a third straight presidential election, there will be angry soul-searching on every topic -- from politics to policy to race. And it won't be pretty.

Agonizing over the contours of that debate, however, is as premature as Kennedy's essay -- and this blog post.

--
Ari Melber writes for The Nation and The Washington Independent, where this piece first appeared.

'I Thought We Were Going To Cancun': Man Mocks Ted Cruz During Flight