As the early days of the HIV/AIDS epidemic are finally being documented in various films, books and exhibits, we must be vigilant to the consequences of historical revisionism. Last week, longtime amfAR board chair Kenneth Cole was on Chelsea Handler's TV talk show Chelsea Lately and rewrote history by erasing the role of the LGBT community in the early days of the epidemic -- and insulting us to boot:

Handler: "How did you get involved with AIDS research?"

Cole: "This is was like 25 years ago and people weren't talking about AIDS then because stigma was so devastating (and arguably stigma has killed more people than the virus itself has), and the gay community wasn't speaking up, they were afraid to."

I could not let this comment go unaddressed, particularly since a similar mistruth has been perpetrated in the promotion of a new film, the Battle of Amfar, that Cole produced. I wrote a blog post and a tweet this past weekend about Cole's comment and how he is promoting his film:

@KennethCole: @BodyCountsBook we agree, our film confirms your point. I was saying that because of stigma, many others were reluctant to speak out

His response is doublespeak -- a deflection that adds no clarity and offers no apology. While his film references gay community activism, that isn't what he said on national television. Nor has he addressed the mistruth in the film's promotional material that reads: "In the darkest days of the epidemic, two very different women -- Hollywood superstar Elizabeth Taylor and research scientist Mathilde Krim -- joined forces to create amfAR (the American Foundation for AIDS Research), America's first AIDS research organization." 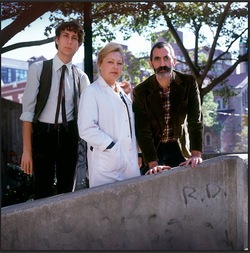 The "first AIDS research organization" was actually the AIDS Medical Foundation, which preceded amfAR by two-and-a-half years and was founded by people with AIDS, including Michael Callen, Dr. Joseph Sonnabend, a pioneering researcher and community physician and Dr. Krim (pictured on right; photo by Peter Serling). Sonnabend knew Krim from interferon research and had asked for her help in raising money to study his sick patients. The partner of one of Sonnabend's patients -- an African American, I might add, whose role has also been largely lost to history -- suggested formation of a foundation to pursue research drawing on Sonnabend's pool of patients.

Krim was AMF's first board chair and quickly became its most generous donor. Two-and-a-half years later, in September of 1985, two community clinicians based in Los Angeles, doctors Michael Gottlieb and Arnold Klein, formed the National AIDS Research Foundation with Elizabeth Taylor as a high-profile co-founder.

When Krim heard of Taylor's involvement, she smartly used her Hollywood connections (her husband was head of a movie studio) to contact Taylor and propose the organizations join forces, creating amfAR. Hollywood producer Howard Rosenman tells me it was David Geffen who got the key parties in the same room and midwifed the merger.

The important efforts of prominent people like Elizabeth Taylor and Mathilde Krim in combating the epidemic are only diminished by lies that render the LGBT community and people with AIDS invisible in those early efforts. It might be effective marketing to write the LGBT community out of this history, or to ignore how people with AIDS were fighting back from the beginning, but it isn't true.

Twenty-five years ago, in 1988, it was almost solely members of the LGBT community who were speaking up about AIDS. The year before, the executive directors of almost all the national lesbian and gay organizations protested government inaction in an act of civil disobedience and got arrested in front of the White House. At this time, the LGBT community had launched hundreds of organizations, was lobbying Congress, legislature and city councils, organizing demonstrations and protests and, quite frankly, could hardly have spoken up any louder. The problem was that too few others were listening -- not that we weren't speaking up. 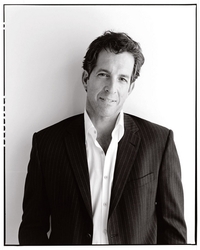 Ken Cole needs to understand epidemic history better before cavalierly making such statements on national television or promoting mistruths about the origin of the organization he heads. The truth is an interesting and important history unto itself, but Cole seems to either not know it, not care about it, or is willfully manipulating history for some other agenda.

It is also worth noting that under Cole's watch as amfAR's Board Chair, the visibility of people openly living with HIV on their board has dropped to an all-time low. There may be others I don't know about, but of the 26 philanthropists, corporate executives, socialites and others listed today as members of amfAR's board of trustees, I recognize only one, former POZ editor Regan Hofmann, as openly HIV-positive. Fewer than a third of the trustees are women. Only one, Harry Belafonte, is African-American.

For him to suggest that either the gay community "wasn't speaking up" or to imply that there wasn't adequate attention to the disease until he got involved is wrong on so many levels. Kenneth Cole owes the gay community -- and all those who were "speaking up" during those early years -- an apology. He also might reflect on what amfAR's board composition says about the organization.