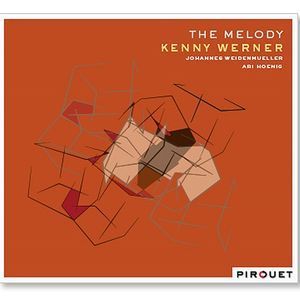 There is something magical about a fine piano trio. When musicians are in sync it is amazing how communicative three pieces can be. When you have the lyrically imaginative leader Kenny Werner on the keys there is no telling where his fertile imagination will lead you. On Werner's latest The Melody, he is joined in perfect harmony by Johannes Weidenmueller on bass and Ari Hoenig on drums and between the three of them they create an exquisite exploration of what it is to be enraptured by melody in its many enduring forms.

Mr. Werner starts with a wonderfully sensitive rumination on the popular song "Try to Remember" from the 1960 Broadway musical "The Fantastiks." He sets the tone showing us the inner beauty of his take on the sentiment before he reveals the actual melody first playing it as a soft lullaby and then letting it breathe, expanding into a more expansive swings and swaggers at times. Mr. Hoenig and Mr. Weidenmueller are not so much a rhythm section as color commentators painting the song with their own subtle pastels and warm tones.

Mr. Werner is no stranger to composition and here he offers four separate tunes of his own. The first "Who?" is a jagged, rhythmic affair that uses a repeated motif as the basis on which to explore. The trio seems to intuit the shifts in time with easy aplomb with Mr. Weidenmueller keeping the motif alive throughout. Mr. Werner's touch is a joy of restraint and delicacy as he moves around the motif with dance-like style

"Balloons," another Werner original, has a light, airy introduction on solo piano before entering into its captivating melodic core. The theme has a child-like, wanderlust quality to its gentle theme expertly played with wrenching sensitivity. A probing bass solo by Mr. Weidenmueller elicits images of a dance of wood sprites in a hidden forest.

John Coltrane's "26-2" is given a jaunty rendering that is probably the most formidable demonstration of how in sync this trio is. The three wind and weave their way through the changes in perfect time, a celebration of one minded playing. Hoenig's traps and Weidenmueller's bass mimicking the same line as Werner's piano lead, a celebration of symbiosis. Werner's lead is always perfectly logical but surprisingly unexpected in a sage kind of way. Hoenig offers a syncopated drum solo that is tasteful and unflashy.

Werner returns with another of his own compositions" Voncify The Emulyans." The composition moves through a series of cadenced vignettes, where Hoenig's military traps seem to set the pace as Werner's pianistic overtures find varied directions. The tempo is often changed and the melodic content is hard to follow but the overall effect is of exploratory rumination. The ending is a gorgeous slow fade on the theme.

Dave Brubeck is an artist whose work seems to have found few followers. Here Werner starts "In You Own Sweet Way" in a decidedly different way. The pianist creates an intro that has a disjointed mechanistic sound which he carries with some dissonance throughout the piece, normally a straight ahead sweet melody. When the trio get down to the melody they do so with a creative flair that employs some swing some syncopation and some style. Werner plays with the melody at times including some quotes from Bernstein. The group prances at different paces throughout the song in a facile display of how different rhythms could dramatically affect the way a song is perceived.

The album ends with Werner's "Beauty Secrets" with his solo intro played as a beautiful piano adagio. Werner is one of the most expressive pianists on the scene today and his touch and sense of poignancy is unmatched here. The texture of Hoenig's stick and cymbal work is the precise compliment to Weidenmueller's anchored bass and Werner's lyrical playing. There is an Americana flavor ala Greensleeves to this one that is very moving.

There is something very beautiful and unpretentious about The Melody and Mr. Werner, Mr. Weidenmuller and Mr. Hoenig have a collectively made listening to it a joy.