Artist Kent Monkman grew up in Winnipeg, Canada. On one occasion the young man of Cree ancestry -- like many kids his age -- wound his way into the halls of a natural history museum. There he was confronted with a common, albeit strange tradition: the diorama.

"There were these life-size dioramas," Monkman recounted in an interview with HuffPost, "where Native Americans were frozen in time, in some idyllic pre-contact state." He likened the scenes to paintings by George Catlin, another figure of the museum world, who captured disappearing peoples in the 19th century. Like the dioramas, Catlin's paintings seemed to assume the depicted figures would not exist in the future, and sought to "freeze" Native Americans in these idealized, yet lost times, creating an eerie distance between contemporary society and our own history.

"Catlin and others were obsessed with capturing peoples who wouldn’t exist in the future. Museums have contributed to this idea" he explained. "As a kid I would go down to this museum in Winnipeg and see indigenous cultures represented in this perfect state. This is what we were supposed to be. And then I'd step out onto the streets and see skid row and the fall out of colonization." 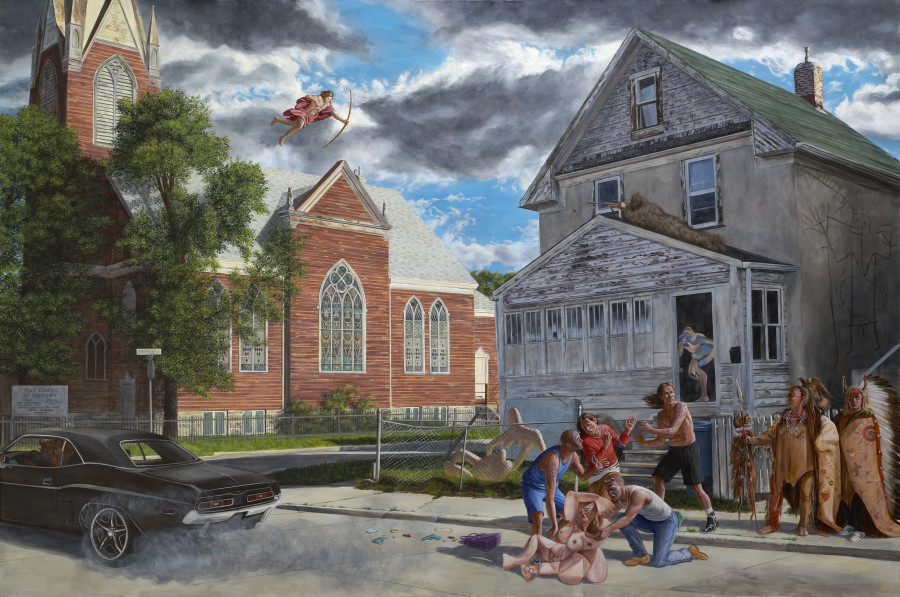 Monkman's new exhibition, "The Urban Res," seeks in many ways to come to terms with this romantic ideal perpetuated by archivists past, and reconcile it with the present reality of Native Americans. With large-scale paintings that nod to art history, and an installation that references his own drag alter ego, Miss Chief Eagle Testickle, the Sargent's Daughters show dissects the foundational myths of North America as we know them.

An abstract painter from the start, Monkman's current works abandon the "cryptic" language of squeegee paint for a more personal language, informed by 18th and 19th century landscape painting and his own lived experience. The result is a visual conflation, as the techniques used by artists like Catlin or Albert Bierstadt to depict sublime mountains and valleys become the means for depicting Monkman's contemporary scenes. Set in dilapidated urban environments, the surreal paintings portray the violence and social dysfunction faced by today's displaced First People.

"Indigenous cultures have been compressed with the advancement of civilization," Monkman points out. "My earlier work over the past few years focused on the historical narratives between settler culture and Native American people. I wanted to re-stage some of these scenes in urban environments, because a lot of indigenous people live in cities. In Canada, more than half are living in cities. And a lot of urban environments are places where Native people once inhabited. This ties back to some of the themes in my current work -- this amnesia in the face of modernity."

Inside the tension between old romance and perverse reality, viewers are confronted not only with familiar Native American tropes -- spirit animals and medicine men -- but also the remnants of other "casualties of modernity." Monkman paints into his canvases Cubist figures reminiscent of Picasso, drawings ripped from the caves of Lascaux and Renaissance-esque angels. The artist refers back to his own historical ancestry, but also to the weight of tradition in the painting world. "These figures, flattened in the pictorial space, are representative of the compression of indigenous cultures," Monkman wrote in a statement for the exhibition, "they are the 'casualties of modernity,' now mourned and assisted by groups of urban indigenous youths." 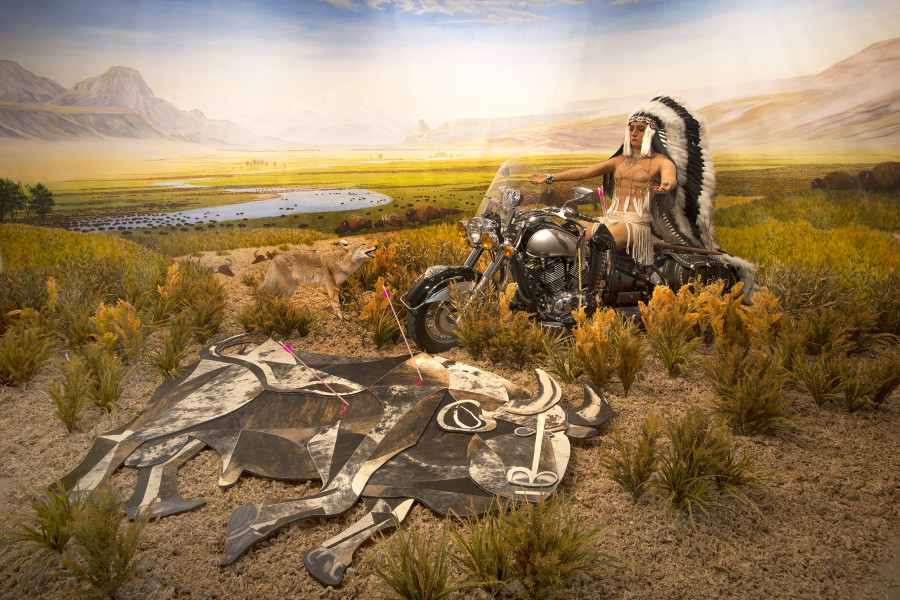 
And then there's Miss Chief Eagle Testickle. The artist's alter-ego makes an appearance in the installation "Bete Noire," a diorama-like visualization of the Urban Reservation Monkman references in his title. "I created her in my paintings 10 years ago," Monkman stated, "I was looking at a George Catlin painting, who, as an artist, was a flamboyant painter who'd paint himself into his work. I was addressing his work and thinking of ways to challenge this artistic persona, who was living inside these paintings and following traditions of the 19th century. I wanted to create an artistic persona that could rival that of Catlin. So [Miss Chief] was created to reverse the gaze. She looks back at European settlers."

Miss Chief, who appears in Monkman's paintings, video and performance, pays tribute to the Two Spirit tradition in Native American culture that embraces an ambiguous third gender. Those with "two spirits" were respected and revered in their own tribes, despite the fact that Catlin wrote about how it was one of the most disgusting things he'd encountered. "He is this man of contradiction," Monkman describes. "Purported to be a savior of disappearing peoples."

Yesterday and today collide, with violence and aggression, across the canvases of "The Urban Res." In an effort to harken back to visuals of the past, Monkman creates his own technique and his own aesthetic, that speaks personally and universally to the misconceptions of colonization and the very real experiences of so-called disappearing people.

Scroll through a preview of Monkman exhibition below. The artist will bring his work to Santa Fe's SITElines biennial this summer. Stay tuned for more updates on the upcoming "Unsettled Landscapes" soon.