Kent Senter is a man racing against time.

The 59-year-old resident of Burlington, N.C., has terminal multiple myeloma, a cancer that attacks bone marrow. Despite that, this weekend, he'll be focused on the number one item at the top of his bucket list: to organize, sponsor and host an international UFO conference.

It's no easy task. Adding to the daily challenges of his illness, Senter has quickly pulled together an intriguing symposium over the past few months in a competitive climate where, between now and the end of the year, another dozen UFO-related conferences are scheduled around the U.S.

On June 29 and 30, 12 speakers -- with backgrounds in science, military, academia, sociology, investigative journalism, including government officials of Chile and France -- will come together for Senter's 2013 Symposium On Official And Scientific Investigations Of Unidentified Aerial Phenomena, at the Greensboro War Memorial Auditorium in Greensboro, NC. 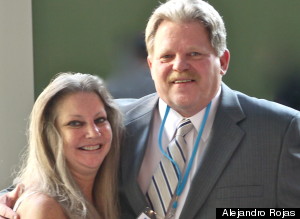 Senter, a former zone manager for the Lowe's home improvement retailer, started having problems with his shoulder in 2007, and after numerous check-ups, was informed he had cancer. Along the way, his cancer was misdiagnosed and Senter ended up with a tumor on his spine that developed into multiple myeloma.

"The doctors gave me six months to three years, but I responded well to the chemo," Senter, seen above with his wife, Patty, told The Huffington Post. "I've been out of remission for about six months now, but I need to start treatments again, so we've got to get to the doctor once this conference is over and decide whether to go with the chemo again or go straight for a stem cell transplant."

Two previous sightings of unidentified aerial phenomena (UAP) in his life -- first at age 10 and later at 33, while living in Durham, N.C. -- shaped Senter's interest and passion about UFOs. The latter encounter involved three yellow, silent hovering circles in a row spotted by Senter. When he shined a flashlight at the objects, clicking it on and off several times, the balls disappeared. They were replaced in the sky by a rectangle of light, which also momentarily hovered before flying away.

For many years, Senter was frustrated by what he believes is an overwhelming taboo in media and government about UFOs and the ridicule of people who report them. He's always wished he could do something to change that, and he feels blessed that his whole family, including two daughters and two sons, support his efforts.

"It's unbelievable! I've got 110 percent support. I couldn't do any of this without them. Patty is probably the strongest woman I've ever met. She's the most supportive, kind person. I've tried to teach them all to pay attention, look at the details and don't believe everything you hear -- just do the research on it.

"There are so many things I wish I could've gone back to do," said Senter, who is currently on disability. "I would love to have gone to college and taken physics. It's the scientists who will have to get rid of the taboo [surrounding UFOs] and not be scared about [losing] their jobs."

In January of this year, a sizeable settlement from his cancer misdiagnosis finally allowed him to consider putting together his own UFO conference.

"We're a non-profit, and this conference is something that's on my bucket list, to show the serious side of UFOs or UAP," said Senter, who recently founded the Center for UFO Research, or CUFOR. "I just want to get the word out that there's another side to this -- it's not just all kooky and alien head dolls. I've had a lot of vendors call, wanting to set up booths and tables to sell things, and I'm not allowing any of that."

Watch this 1990 TV report, featuring Belgian Gen. Wilfried De Brouwer, one of the key speakers at the North Carolina symposium:

Another key element of this weekend's conference is that there won't be many statements or theories that presume extraterrestrials are already on Earth, communicating with humans.

"I think before you can get on any fringe side or talk about extraterrestrials, you've got to first prove the existence of craft flying there in the first place," said Senter. "You need to take baby steps at this point. Nothing else seems to have worked. If you can at least acknowledge that something's flying up there that our jets can't keep up with, let's go by what we can prove."

When the money became available to Senter five months ago, he was spurred on by Patty to pursue his dream of creating a serious UFO conference.

"I would support Kent no matter what he did," Patty, 54, told HuffPost. "I see him getting worn down because he devotes 150 percent of his energy into what he's doing, so it wears him out and when the pain really kicks in, I can't take it away from him, and that's what breaks my heart. There are certain things that I just can't do. I'm just so proud of him and couldn't be happier to be his wife -- it's just the best thing that ever happened to me."

To help him organize this conference, which he's paying for out of his own pocket, Senter turned to investigative reporter Leslie Kean, author of the New York Times bestseller "UFOs: Generals, Pilots and Government Officials Go On The Record."

"Kent is really unbelievably inspiring with the amount of work he's done, given the odds and the suffering he's going through. He's doing this conference for all the right reasons with a lot of integrity, because he believes in it. It's sort of like his last wish," Kean told The Huffington Post.

Last September, in Santiago, Chile, at the headquarters of the DGAC (Chile's equivalent of America's FAA), Kean was invited to speak before many active military personnel, university scientists, aviation specialists and foreign attaches -- it was the first time an American had ever been invited to address such high-level people in Chile. (See image below showing Kean in the front row, preparing to speak). 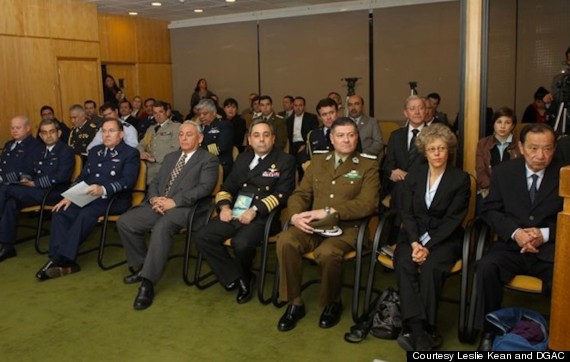 France and Chile are among a growing number of countries that have internal, official agencies which investigate UFOs. The CUFOR conference will present Xavier Passot, a computer scientist who is also the head of France's UFO investigative agency, GEIPAN. Joining Passot to share information about what their countries know about UFOs will be his Chilean counterpart, Jose Lay, the international affairs director of Chile's UAP/UFO investigation agency.

"I'm in charge of trying to establish links and communications with other countries that have the same interest we have on the subject of UAP or UFOs," Lay told HuffPost. "I also participate in the federal investigations with a staff of four people, including our director, retired air force Gen. Ricardo Bermudez [and] a retired former air traffic controller."

In the image above, Lay is seen sitting to Kean's left.

When Lay steps to the podium at this week's UFO symposium, it will be his first time ever speaking in the United States. He adds that, according to the latest survey, 85 percent of the Chilean population believes the UFO/UAP phenomenon is real.

"We have enough reasons, enough evidence, to satisfy us of the fact that the phenomenon exists! It is there and worthwhile investigating. And that's why we have a scientific committee, and they are all skeptical. However, as true scientists, they recognize there is something there that deserves to be investigated."

Senter's roster of speakers guarantees serious UFO discussions at his upcoming conference. In fact, he was surprised when such a high caliber group of people agreed to come to his bucket list event.

"I was shocked! It's unbelievable, and I'm thankful. I just wanted to get this group together. It's important that my children know the truth and what's going on. I would love to have an answer by the government that yes, there's something flying around out there, and to at least get pilots to acknowledge what they see.

"I'd like to see this happen before I pass away. I don't want to have been interested in this and researched all these years and just go to my grave with no answers."