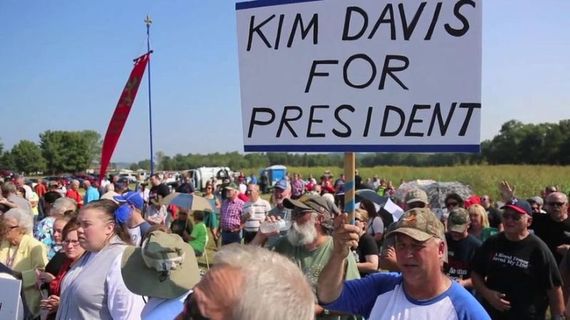 I'm not sure why, but, in spite of all the mass shootings, in spite of the dozens of cases of police brutality, in spite of story after story of political corruption, and in spite of all the other horrible things we do to each other each day in this country, the God VS. Gays tragic comedy that's been playing out in the Bible Belt for the past month is the one event that far and away makes me ashamed to be an American.

Maybe it's because men currently campaigning to lead this country and represent the United States to the world came to the aid of a woman so far gone, so far off her rocker that she draws comparisons - in appearance as well as behavior - to Annie Wilkes, Cathy Bates' psychopathic killer in the Stephen King classic, Misery. A woman whose off-the-charts fanaticism landed her as the 17th most popular villain in movie history.

Or, maybe it's because not one, not two, but five schools had to be closed to prepare the city of Grayson, Kentucky for the onslaught of supporters expected to show up to cheer on a religiously justified zealot.

However, if I think about it for a minute, the real reason I'm ashamed to be an American is much simpler: I can never listen to Eye of the Tiger again.

When I was 13, Rocky III was my favorite movie. To think, one of the greatest theme songs in movie history was just used as the soundtrack to modern-day discrimination, is beyond cruel.

The thought of Rocky trying to stay motivated to fight Clubber Lang, knowing his cherished anthem is being used at rallies that look like they've been plucked from a chapter of The Crucible, is simply too much to bear.

All kidding aside, after witnessing the events of the past few weeks, the thing that makes me want to pack my bags and hop a flight to Stockholm more than ever is the sheer overwhelming number of radical, ignorant fanatics that apparently reside in this country.

Not just empty-headed clowns like Huckabee and Cruz, but the thousands of others who also see nothing wrong with ignoring the fact that the Constitution calls for complete separation of church and state, and who are the living definition of anti-American, yet they wave their American flags as a symbol of their ignorance at their hate rallies. If that's not desecration, what is?

After what's gone down the past month in Kentucky, does it seem that far-fetched to think more than a few of our fellow Americans would most likely defend burning gays at the stake if they believed it was being done in the name of God?

To those of us with common sense, it sounds unthinkable. But these people have already demonstrated they're clearly out of their minds, so how far would they go in the name of The Lord? Is being a religious zealot all-consuming, or are their different tiers of crazy? One would tend to think the former, especially since the onslaught of ISIS.

We talk all day about how our government's not doing enough to stop the spread of fanaticism in the Middle East, but what about here? Here we turn them into rock stars.

Forget about your average, everyday meathead. To see State and local officials holding rallies to support and defend, what any person with an IQ over 3 can see is a clear violation of a group of people's civil rights, all in the name of religion, and in our own backyard, is simply incomprehensible. It feels like we just went back in time 50 years. Or, if you go by the carefully-chosen passages of scripture they're constantly quoting, 1000 years.

Hate is having a banner year. Discrimination is at an all-time high in dozens of countries around the world.

You'd think, at this point, after all we've seen, after all the lessons we've learned and are continuing to learn, Americans would be above such blatant displays of intolerance. At the very least, even if bigotry was being practiced by a certain few here, you wouldn't see former governors and current senators - and presidential candidates - attempting to use hate, in all its forms, as a cornerstone of their campaign platforms for the presidency. It's simply nauseating.

Our forefathers must be turning over in their graves.

The one fun part in all this lunacy are the awesome memes that, with a single sentence, completely invalidate these religious nuts' entire argument and expose the hypocrisy they hide behind faster than you can say "Josh Duggar!" Here are two of my faves:

Whether it's this Kentucky Fried Chick becoming famous for her intolerance, or a real fast food chain's business increasing sales due to their anti-gay stance, the scariest part for those of us who don't subscribe to the notion that those different from us should be persecuted specifically because of their differences, is how fast other "franchises" can pop up.

Hopefully, by the time this happens, I'll be sitting with my mail order bride, Inga, watching reruns of Rocky lll in Swedish.