The Sandhill Crane is one of America's most majestic and charismatic birds. 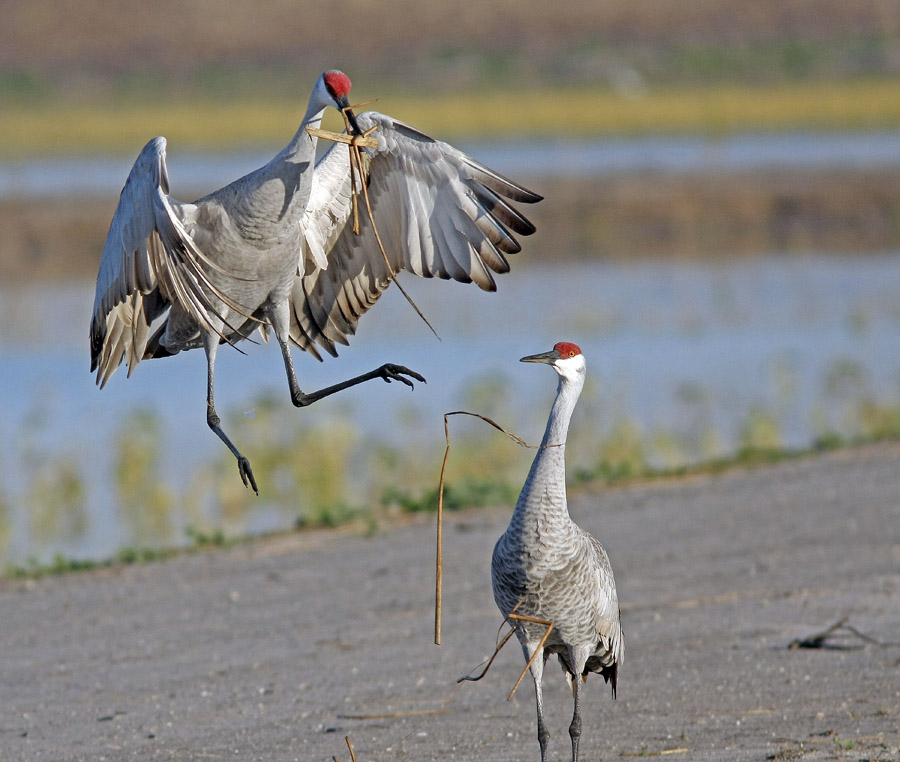 Known worldwide as a symbol of peace, Sandhill Cranes are wading birds that can weigh over 7 lbs, with a wingspan up to 7 feet. They eat grain, berries, roots and insects. Sandhill Cranes migrate thousands of miles each per year, from Mexico to Canada. They fly in a V-formation at 500 to 2500 feet, with some migrations reaching an astounding 12,000 ft elevation. They can travel up to 500 miles in 10 hours. They mate for life, and the young cranes rely on their parents to teach them the migration route.

Their noisy cackle -- described by "Smithsonian Birds of North America" as "garoo-oo-a-a-a" -- can carry for over a mile, and the spectacle of hundreds of thousands of migrating Sandhill Cranes gathered on Nebraska's Platte River every February and March is a major tourist attraction.

Once hunted nearly to extinction, these migratory birds have been protected from hunting in Kentucky since the 1920's. But a proposal by the Kentucky Department of Fish and Wildlife Resources (KDFWR) to open a new hunting season on Sandhill Cranes has conservation groups crying foul.

Most disturbingly, there were no public meetings held prior to the release of the proposed hunting plan, although the hunt was discussed at KDFWR's town hall meetings. According to a May 6 transcript of a hearing at the KDFWR offices in Frankfort, Carol Besse of the Kentucky Ornithological Society stated "I'd just like to point out Dr. Gassett that this hunt plan had not been released before those town hall meetings."

Prior to the vote by the Commission -- and prior to the first true public hearing on the hunt proposal on May 6, KDFWR released "The Case For Hunting Sandhill Cranes" on April 15 and posters were placed prominently in hunting and sporting goods stores urging sportsmen to write letters in support of the hunt, reading: "ATTENTION Kentucky Hunters -- Our hunting heritage is under constant threat. It is time for the sportsmen and women of the Commonwealth to unite!"

Yet KDFWR has done virtually no outreach to Kentucky conservation, birding and wildlife-watching groups such as Audubon or Sierra Club. " The department is acting as if it were a hunting club," wrote Carol Besse in a widely circulated op-ed.

Kentucky Governor Steve Beshear is feeling increasing heat from a public -- including even hunters -- who are bitterly opposed to the hunt.

With a November gubernatorial election just around the corner, activists have promised to keep up the pressure on Gov. Beshear, announcing a rally to protect the cranes on the front lawn of the Kentucky Governor's Mansion on Saturday, August 27 at noon.

"We believe wildlife conservation will be better served by invigorating a broadened base ... We realize that a lot of thought, time, and resources are needed to get 4000 folks at a crane festival like at Hiwassee Wildlife Refuge in southeast Tennessee or to develop a location where 30,000 visitors come each year to view cranes like at the Jasper-Pulaski Fish and Wildlife Area in northwest Indiana."

If the hunt begins, conservationists fear that the birds will become much more skittish and wildlife watching opportunities will be permanently lost.