Wisconsin beat Kentucky, 71-64, in the Final Four on Saturday to advance to the NCAA championship game, ending the Wildcats perfect season.

The Badgers and Wildcats were neck and neck throughout much of the game. However, Wisconsin went on a strong run at the beginning of the second half, leading by as much as 8 points.

The teams squared off for the rest of the half, and Kentucky battled back to regain the lead, 58-56, with 7:40 left. Another basket from Kentucky's Karl-Anthony Towns extended the Wildcats to a 4-point lead, but it would be the last time Kentucky was ahead.

The Badgers mounted a strong offense for the remaining minutes. At 2:41, Wisconsin's Nigel Hayes tied the game at 60-60, with what many considered a shot clock violation that wasn't called. Nevertheless, Hayes' 2 points continued the Badgers' momentum.

Wisconsin maintained a slim lead over Kentucky. With just ten seconds left and the score 68-64, Kentucky coach John Calipari called a timeout, but the Badgers could not be shaken. Wisconsin went on to score three of four free throws for what would be the final points of the game.

Wisconsin coach Bo Ryan learned at the end of his game, that Duke won the earlier matchup against Michigan State and would be the Badger's opponent on Monday for the championship game.

"It gives us another 40 minutes," Ryan said after his team's win.

Wisconsin's Frank Kaminsky led scorers on both sides with 20 points. The forward, who was just named AP Player of the Year, also had 11 rebounds in the game. Towns had 16 points and 9 rebounds for the Wildcats.

Speaking after the game, Calipari said the loss "hurts." The Wildcats were aiming to become the first undefeated team since 1976 to win the NCAA Tournament.

"It hurts, but I'm so proud of these kids," Calipari said to CBS Sports' Tracy Wolfson, adding it was the first time in two years his team "didn't execute down the stretch...that we didn't do the stuff that we were supposed to do."

"But, Wisconsin was outstanding...they just kept coming," he said. In fact, the Badgers' final appearance is not short of historic, either. It'll be the first time Wisconsin has been in the final since 1941.

Calipari said he told his team in the locker room after the game that despite their loss, "'No one's ever going to do what you just did.'"

"It hurts because we were really close to doing something even more historic than 38 in a row," Calipari said.

Wisconsin will face off against Duke on Monday for the national championship title. 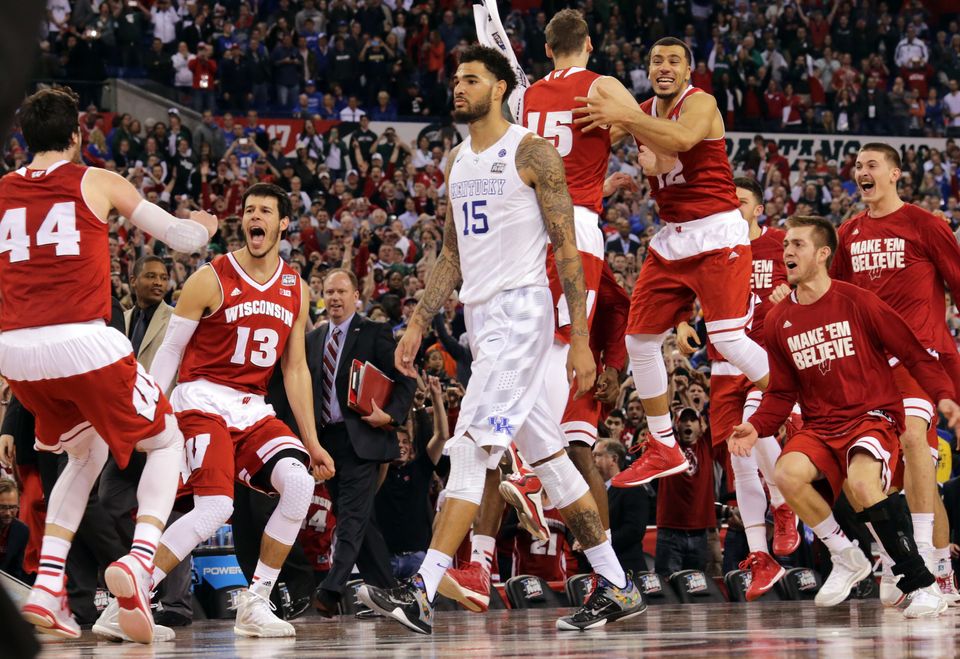