I have lived outside of America for the past 16 months. During this time and throughout my travels as an "artist-in-residence," I have tried hard to be present in the places I have landed like Bangalore, Yamaguchi, Johannesburg and Nairobi. Despite a genuine effort, I have regularly succumbed to my mass media addiction and have, somewhat reluctantly but always necessarily found a way to stay informed about what is happening back home.

Being this addict-artist, I recognize and quasi-accept my preoccupation, borderline obsession with pop culture. So deep is my addiction that I have actually followed the wedding of Kim Kardashian to Kris Humphries. For the four or five people out there who are unaware, Kim Kardashian's big Hollywood wedding cost about $10 million for a marriage that lasted about 72 days. It was a lavish, impossibly perfect party that we weren't invited to attend. At least not in the conventional way. E! Network filmed the entire event and televised it to impressive ratings a few days before the divorce filing. I suspect we'll all be watching the Kardashian divorce special soon (Kim meeting with her lawyer, Kim jetting off to Australia to find herself and so on).

About a year ago, I decided to throw my own party. Among the many differences between me and Kim Kardashian was that my "party" would include as many people as possible. Since my primary focus as an artist is people's physical engagement with art, I decided to give out 10,000 brightly colored balloons on a Monday Morning in the transportation hub of cities around the world. Each commuter would be given a balloon and asked to hold on to it until he/she got to work. It was, and remains, a fairly simple concept: the art of modifying a moment and redefining what art means to people using balloons.

The motivation for the installation was to counter that Monday morning feeling. The melancholy that strikes you when you open your eyes in bed, realizing the weekend is over and you must go back to the grind of things. In the West, we call this the Monday blues and just another "Manic Monday" as the eponymous song goes. But even in places like Japan, there is terminology, namely "Sazae-San Syndrome" to describe this phenomenon. Sazae-San is a popular family cartoon that has been broadcast every Sunday evening for the past thirty five years. Although the show is light-hearted and extols simple family values, it tends to depress people because they have come to associate the program with the end of the weekend.

Another motivation of mine was to speak to people across cultures and help them broaden their definition of art. This is especially true in the context of developing countries where education and funding for arts can be, and often is, limited.

I must be clear that I came to Kenya planning to perform another Monday Morning, before any of the recent terrorist attacks or any of the prevailing negativity invaded this beautiful but complicated country. Creating this art amidst the fear of grenade attacks and terrorism in Nairobi further transformed the work. While Americans may be concerned with so much at home (a lot of the worry legitimate, some if it not so much: see Kim Kardashian), Kenyans are resisting the urge to visit their local shopping malls or go to the center of town because they have been warned that these places could be attacked by al-Shabab. These concerns are real and the issues are truly life and death.

But for one morning, a Monday Morning no less, bright yellow balloons changed some commuters' mood who came across them in the heart of Kenya's capital city. They smiled in spite of their fear. They accepted a balloon in spite of their genuine reservations. And they went on about their day, in spite of war. 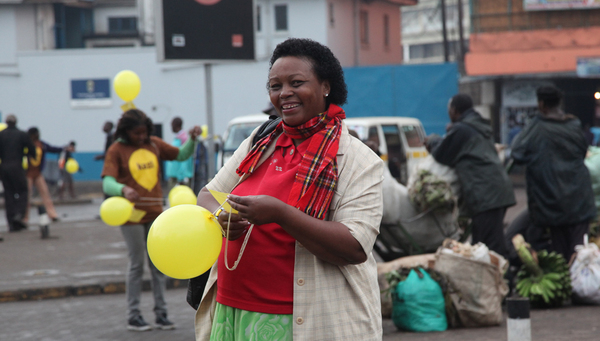