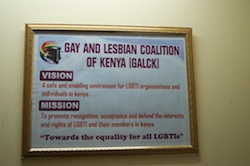 In our worldwide search for Out & Around: Stories from a Not-So-Straight Journey, we travelled to Kenya to explore everyday life for gays and lesbians.

In November 2010 the Kenyan prime minister condemned homosexuality, saying, "If found, the homosexuals should be arrested and taken to relevant authorities." Under international pressure, he retracted his statements days later, saying he only meant that same-sex marriages are illegal in Kenya.

The Kenyan penal code criminalizes homosexual behavior with up to 14 years imprisonment. A 2007 study found that 96 percent of the Kenyan population opposes homosexuality.

So we asked: what is gay and lesbian life actually like for the average Kenyan living in Nairobi? 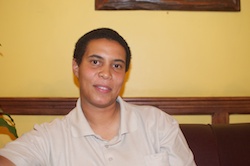 We first meet with Akinyi Ocholla, a lesbian from Nairobi who works for Minority Women in Action and is a member of the International Gay and Lesbian Association. She tells us that Kenya has 42 different tribes, each with its own culture. Akinyi says, "The problem is that we remain a very closed society. We have not allowed ourselves to debate, diaglogue, and discuss issues surrounding sex and sexuality. That means people have a shallow understanding of sexual orientation."

Complicating matters, of course, is the strong religiously based homophobia in East Africa. She says, "When you bring in the religious aspect, and the traditional African culture of sex being a taboo topic, you have a complex situation. You can't discuss it because you are an African, and Africans don't discuss sex. You can't discuss it because you're a Christian, and Christians don't discuss sex. And then of course you have this funny law that criminalizes it. So there are so many things working against the discussion."

Still, Akinyi takes on some heated discussions. She says, "When people believe in the Bible very literally, you cannot really do advocacy without negotiating religion. It's very difficult to come to some compromising point. Personally, I don't go to church, and I stopped reading the Bible a long time ago. I find it difficult to argue with religious people, so I use the scientific angle. I tell people, 'You may believe what you believe, but the fact is I am this way because I simply am. So what are we going to do about it? Let's just respect each other and get on with life.'"

Akinyi considers herself lucky to live as an openly gay woman. She says, "Being gay in this country isn't exactly easy. It's not as bad as in Uganda, but it's still not easy. But you can actually pass. If you don't make too much noise or stand out too much, then you can live comfortably -- that is, until the neighborhood finds out. Then you can't really know what's going to happen." 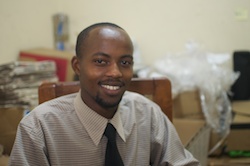 To get a gay male perspective, we met with Solomon Wambua, Programs Officer of the Gay and Lesbian Coalition of Kenya (GALCK), the country's largest LGBT organization. Solomon tells us that when he came out to his mother, "she told me that the devil is now living in our house. She said that she wasted money paying for my school fees. I tell others now that family can take away your school or kick you out. Before you come out of the closet, get your education."

He says, "Most parents try to contain it within the immediate family when they have a son or daughter who comes out. My mom was like, 'I don't have a problem with you, but what will the rest of the family say?' Then came several debates about this being un-African and questions about whether or not I was raped as a child." As of today, Solomon's extended family still does not know about his sexual orientation.

Yet Solomon chooses to work at GALCK despite his own concern about whether or not he can find employment again after associating with a gay organization. In a country where homosexual acts are illegal, there are, of course, no anti-discrimination laws protecting sexual orientation. He says, "People think when you are gay you are a pedophilia or commit sodomy. "

When I asked Solomon about the number of gays incarcerated due to this penal code, he says, "Up to date, no case has been convicted of the penal code leading to actual incarceration. But it is used to extort money and blackmail people. It is used to discriminate and put lesbians and gays down."

Organizations such as GALCK and Minority Women in Action are able to exist in Kenya despite the penal code. While there are no pride parades or openly gay clubs, Solomon organizes community events such as World AIDS Day and the International Day Against Homophobia. The GALCK office remains open as a safe place for people to come read about gay topics, gain support from counselors, and hang out.

Solomon tells us, "The number of LGBT organizations grows every year." Akinyi also tells us that thanks to the efforts of NGOs, "people are now discussing it. It's a novel topic. The youth want to know more. They are not afraid. The salvation is with the youth."

What was it like for us to travel to Kenya as a lesbian couple? Watch our video, including interviews with Solomon and Akinyi: